Behind the scenes of Rotich’s Sh3tr budget 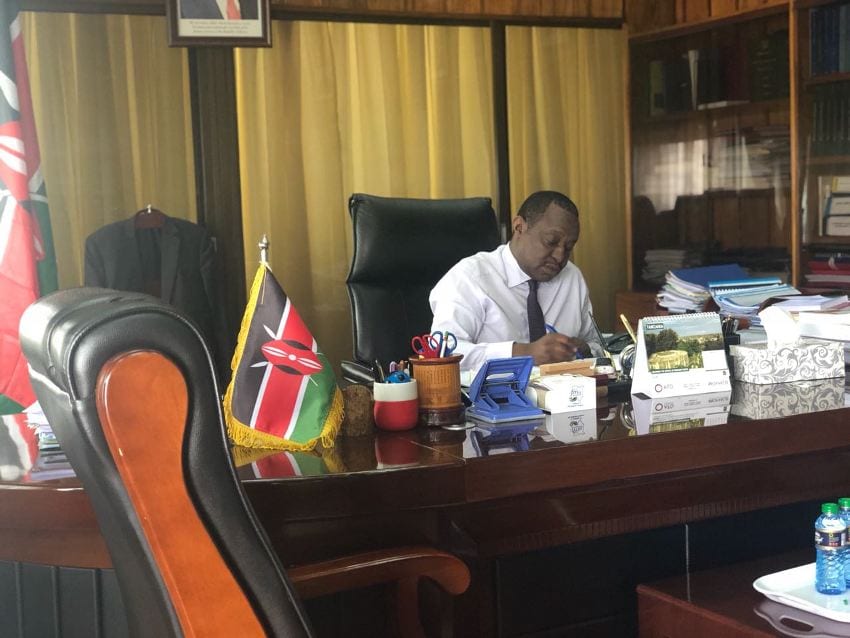 Every second Thursday in the month of June, Kenyans wait with bated breath to hear the country’s financial plans for the next financial year.

The budget making process, is a tradition that dates back to pre independence days with Finance ministers at the Treasury working an 11 month cycle to come up with a 12 month financing plan.

Henry Rotich is the man at the helm of the National Treasury, a man the entire nation will turn to listen to on Thursday afternoon as he present his budget policy statement.

And with barely 24 hours left till the budget is presented to Parliament, Mr Rotich still has his hands full making last minute adjustments to the Finance Bill, a fine balancing act meant to ensure the government is able to finance the project Sh3 trillion budget.

“It is quite hectic, we have to spend long hours to ensure that this is done on time,” Mr Rotich told Citizen Digital when we went behind the scenes to witness the process.

BUT while the Treasury CS remains the face of this strenuous process, we sought to find out who else is the team.

“It is not only Rotich and (Treasury PS Kamau) Thugge who handle the budget, it is a collaboration of a many people,” he said.

The behind the scenes tour takes Citizen Digital to the office of director of macro and fiscal affairs Musa Kathanje.

Here, close to 20 individuals from the Treasury and the Kenya Revenue Authority (KRA) hold intimate discussions on tax policies ahead of the budget statement.

The meeting is held parallel with that of the budget appropriations committee.

“Between now and Thursday two things are running parallel, parliament are finalizing their approval, I need to take those on board so my statement is very fluid, it’s going to change until that day of Thursday,” Mr Rotich said.

A near 50 man technical team puts in eleven months of hard work to deliver the budget.

The team is split into various groups, each assigned a ministry, state corporation, independent commissions, parliament and the judiciary in September to review budgets and expectations for the next financial year.

This begins with the sector hearings that allow the public and other stakeholders to give their views at the sectoral level, to enable treasury to prepare the national budget policy statement.

By September 30th, the team ensures that the National Treasury delivers budget review and outlook papers which should be tabled in parliament by October 21st.

The team then proceeds to work in the background to ensure that by February 15th, Treasury has tabled before parliament national budget policy statement medium-term debt management strategy paper; the division of revenue bill and the county allocation of revenue bill.

By March 1st, the team ensures that budget policy statement is before Parliament and publicized.

This is followed by the April 30th deadline for the budget estimates to be tabled in parliament, opening up the coveted public hearings and recommendation on the estimates.

“We don’t want to leave any comment without looking at it, so the team has to work among time,” the CS said.

They then are tasked with the crafting of the finance bill that largely determines how the deficit of the budget will be funded.

“The finance bill receives a lot of attention so they are all here providing the legal drafting of our layman interpretation of what the Kenyans want…they work almost 24/7 at this particular juncture,” he said.

The work continues until all the t’s are crossed and all i’s are dotted in the budget statement and the finance bill they are made available to the man of the hour ahead of presentation in parliament.

The budget team will be allowed a month off to recharge in July in preparation for the same cycle that kicks off in September.