From 64 branches to just 5: Retailer Tuskys nears its last breath 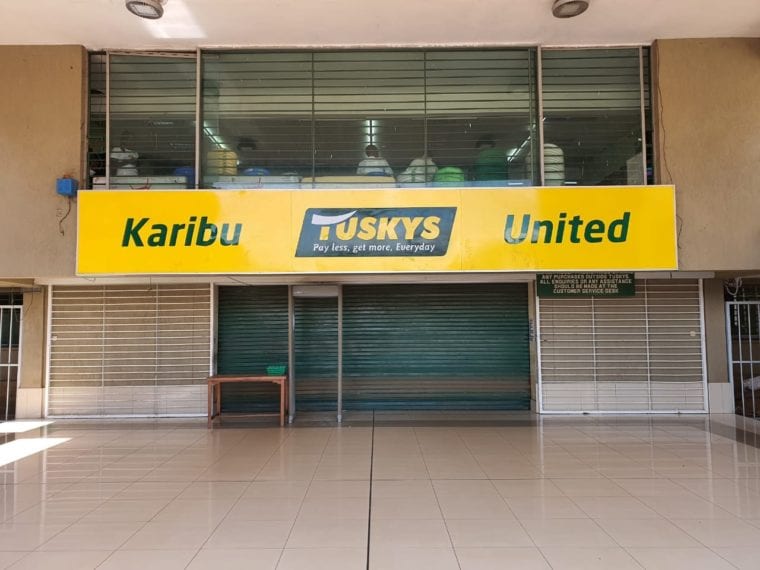 Troubled retailer Tuskys is nearing its last breath with its branch count having fallen to just five from a high of 64 in a little over 12 months.

The last five branches have been the culmination of sporadic branch closures around the country fuelled by disgruntled creditors largely covering unpaid landlords.

The remnant outlets are in and around the Nairobi Central Business District (CBD) including Enkarasha (Kenyatta Avenue), Imara (Tom Mboya Street), Buruburu, T-Mall and Athi River.

From sitting at the apex of Kenya’s formal retail sector with branches spread across Kenya and Uganda, Tuskys is now clinging on the edge of the cliff in just over one year since its predecessor at the top, Nakumatt, was sent into liquidation by the courts.

Operations inside the remaining five stores mirror the shell of the former retail gem with the retailer yielding lower sales from goods stock-outs as suppliers keep off the chain.

At the same time, margins from the five stores have been wiped off by higher overhead costs with the branches using diesel-powered generators to keep the lights after Kenya Power pulled the plug on electricity supply over pending bills settlement.

Moreover, after losing its pioneer store in Nakuru, Tuskys is now set to relocate its headquarters from Nairobi’s City Cabanas bus terminus to its Athi River branch as the chain struggles to service rent.

Nevertheless, the retailer has in recent days gone silent on the status of disbursements from the fund which it had tipped to lift the chain off the floor.

Presently, the retailer is running behind its optimistic turnaround proposal which would have seen Ksh.2.1 billion booked from the private fund in November to provide temporal relief on existing cash constraints.

Tuskys has also been banking on a plan to clear old debt to creditors over the long-term in a move that has seen it engage its partners on debt restructuring.

At the same time, the retailer has established a custodial account to meet current supplier payments.

The commencement of hearings on two petitions against the retailer later this week on Thursday could well mark the beginning of the end for the former giant.

Hot Point Appliances Limited and Syndicate agencies Limited have been the first firms to ask the courts to send the supermarket to the slammers over unpaid debt.

Tuskys now risks being put in administration should it fail to prove the efficacy of its turnaround plan.

The supermarket has arrears in excess of Ksh.6 billion including more than Ksh.2.8 billion in debt exposures to local banks.

The administration could further mark the final nail in the coffin should the new caretaker also uncover doubts to a potential turnaround plan.

In January last year, Nakumatt creditors alongside administrator Peter Kahi voted in favour of liquidation bringing to an end the reign of the top chain later succeeded by Tuskys.

Naivas and Quickmart are now battling out to be the successors of Tuskys in a retail scene characterized by volatility following further exits by Southern Africa chains Choppies and Shoprite.