RIP iTunes as we know it. Apple breaks up iconic music platform 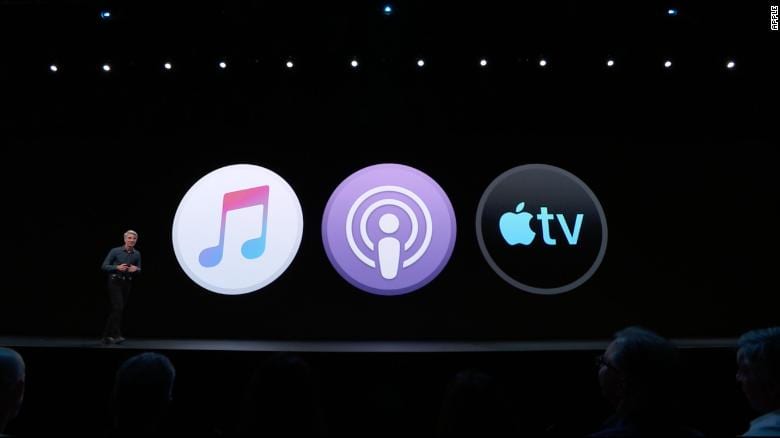 The music industry has changed dramatically since Apple disrupted the way people buy songs and albums nearly two decades ago.

So Apple is phasing out iTunes in favor of three more modern apps.

Apple announced Monday that iTunes will be replaced by a trio of desktop apps called Music, TV, and Podcasts — similar to how these services are already divided into iPhones and iPads. It will still exist as a standalone iOS app and on Windows PCs.

Previous purchases and libraries will be maintained in each new app on Mac computers, a spokesperson told CNN Business.

At its Worldwide Developer Conference in San Jose, Apple (AAPL) showed off its next-generation mobile software iOS 13, which got a dark mode, improved Siri capabilities and an undo gesture, as well as a new Mac Pro that looks like a cheese grater.

But the move to phase out iTunes didn’t come as a total surprise as the company has been pushing users toward its Apple Music subscription service. After all, Apple can charge a monthly fee to boost revenue rather than wait for a customer to buy a few songs.

The Apple Music app is focused on music and personalized recommendations, the Podcasts app lets you search with the help of machine learning and the TV app will blend content from networks such as HBO and Showtime, along with original programming from Apple.

The company said users will still be able to purchase and download songs through iTunes’ Music store within the Music app, and can buy movies and TV shows in the Apple TV app. iTunes gift cards will stay active, a spokesperson told CNN Business.

For people who used iTunes to sync up their devices, Apple said a tool will now be located via the sidebar in Finder on their Macs.

MacOS features unveiled at WWDC typically launch in the fall.

ITunes formally launched in 2001 but its music store launched two years later, changed the way we buy songs and albums.

The format came at a time the music business struggled with online piracy and file-sharing sites.

With a relatively intuitive user interface, a simple billing tool and an on-demand catalog, iTunes far better experience than any other platform at the time.

ITunes’ strategy has been closely aligned with Apple’s devices business, but the rise of subscription content and services is a clear shift away from the iTunes model, said Jack Kent, analyst of IHS Markit.

“For Apple’s own business, it marks the strategic shift away from a central hardware focus to a business in which subscription content and services are increasingly important for margin and revenues,” said Kent, referencing the iPhone’s sluggish sales.

IHS Markit’s research found subscription services accounted for more than 80% of online music and video revenues in 2018, compared with less than 10% in 2008, in North America and Western Europe.

Over the years, critics argued standalone apps — like the ones already on iPhones and iPads — could offer a smarter approach. Now that Apple has now acquired 56 million paying customers, perhaps the time is ripe for such a change.

“Apple had to put the pieces in place to make it all happen,” said Ramon Llamas of IDC Research. “If you look at consumer behavior in which users are willing to pay a regular fee for unlimited content — and that’s what they can get from other services such as Spotify, Pandora, and Netflix — Apple is smartly aligning itself against those competitors with its own approach.”

But the news doesn’t mean CEO Tim Cook will remotely deleting years of downloaded and purchased songs and movies. It will likely roll out next steps to manage and access downloaded content in other ways, such as via Apple Music.

“Building a bridge is always important in order to not alienate its current user base, but I’d argue that it has already taken that step considering the Apple Music numbers,” Llamas said. “Clearly, it needs to direct people in that direction and show a clear cut-off date so that users are prepared.”