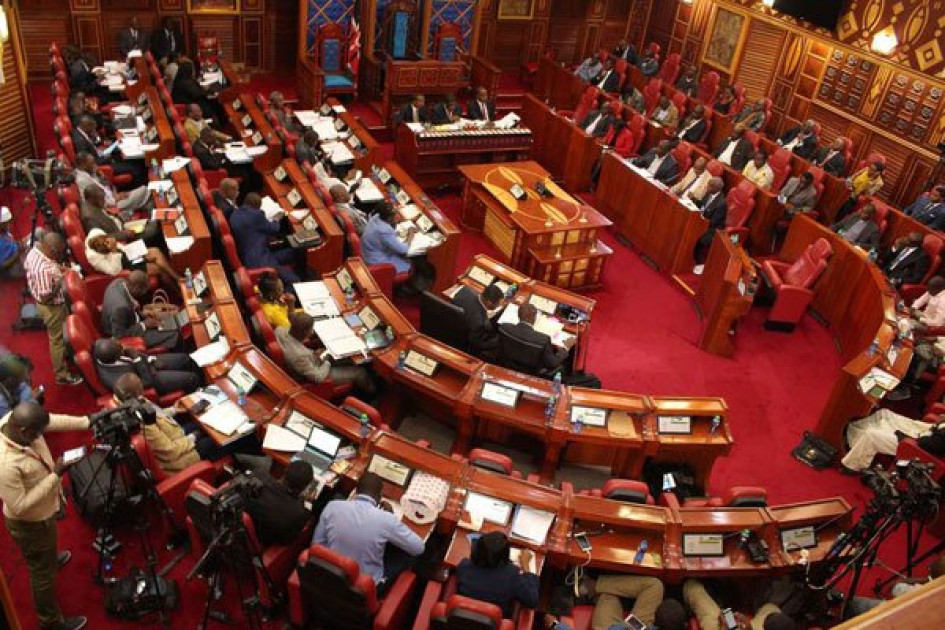 File image of the Senate in session. PHOTO | COURTESY

Senators have overwhelmingly voted in support of raising the country’s debt ceiling from the current Ksh.9 trillion to Ksh.10 trillion.

27 Senators voted to approve the motion on Tuesday afternoon against just three opposing votes, while none of the legislators abstained from taking the vote.

The decision by the Senate now rubber stamps Ksh.10 trillion as the new debt ceiling for the country after Members of Parliament (MPs) supported the motion on June 7.

The majority support on Tuesday was nevertheless against the backdrop of opposing views from some members which saw the moving of the motion delayed for more than a week.

This as the movers of the motion lobbied for support to lift the ceiling by taming dissenting views.

During the debate of the motion last Tuesday, the Chairperson of the Senate’s Delegated Legislation Committee Mwinyi Haji Mohamed said the lifting of the ceiling has been occasioned by unforeseen hits to the government fiscus plan including the Russia-Ukraine war.

“The National Treasury committed in 2019 that the debt ceiling of Ksh.9 trillion will be enough until 2024. However a number of unfavourable events have taken place that have led to the depression of the ceiling,” he said.

While seconding the motion, Narok Senator Ledama Ole Kina said the lifting of the ceiling would allow the government to execute the 2022/23 budget with the fiscal year set to start on July 1.

“The increase in the debt ceiling allows the government to accommodate the 2022/23 budget. The economy continues to face shocks including a weaker shilling, rising global commodity prices which do not just affect Kenya but the world at large,” he said.

“In the big picture, it means within a record nine years we have increased our public debt by a whole Ksh.7 trillion, this is not acceptable. Sooner or later, we will still have to increase the debt ceiling and it means that we are living above our means,” he stated.

The wider debt ceiling is expected to accommodate the 2022/23 fiscal deficit estimated at Ksh.846 billion.

However, estimates contained in the 2022 Budget Policy Statement (BPS) show the new ceiling will be breached before June of 2024 setting off yet another debt ceiling review.

Earlier, the National Treasury had proposed to change the debt ceiling from Ksh.9 trillion to 55 per cent of debt as a share of GDP at present value.