2Face Idibia’s wife posts image of his baby mama, the caption will surprise you 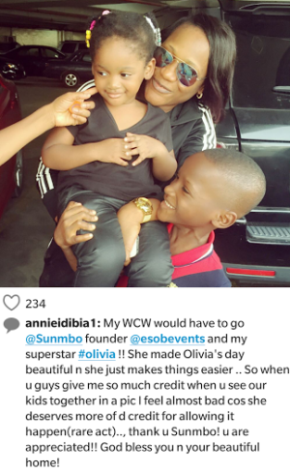 Actress and wife to African music legend 2Face, Annie Idibia, made one of her husband’s baby mamas her WCW (woman crush Wednesday) on this week.

She shared a picture of Sunmbo Ajaba Adeoye on Instagram, holding her (Adeoye’s) two children.

In the caption and praised saying, “My WCW would have to go @Sunmbo founder @esobevents and my superstar #olivia!! She made Olivia’s day beautiful and she just makes things easier..”

“So when you guys give me so much credit when you see our kids together in a pic I feel almost bad cos she deserves more of the credit for allowing it happen (rare act)… thank you Sunmbo! You are appreciated!! God Bless you and your beautiful home!”

The image and caption caused a stir online, and Mrs. Idibia eventually took it down.

This move, garnered the Nigerian actress so much praise from her fans.

Sunmbo Ajaba-Adeoye, who was the first women to have children (two boys named Zino and Nino) by the African Queen singer, is now married to a pastor.

Sunmbo is the owner of an event company called Esob.

Annie and 2Face’s marriage has not been a walk in the park.

The challenges are in fact plenty for the two, with 2Face Idibia’s two baby mamas added to the strain of their individual working schedules.

Annie and 2Face have two children together, but 2 Face has 5 others.

The two have overcome the challenges and have chosen to remain united since their wedding in March 2013.