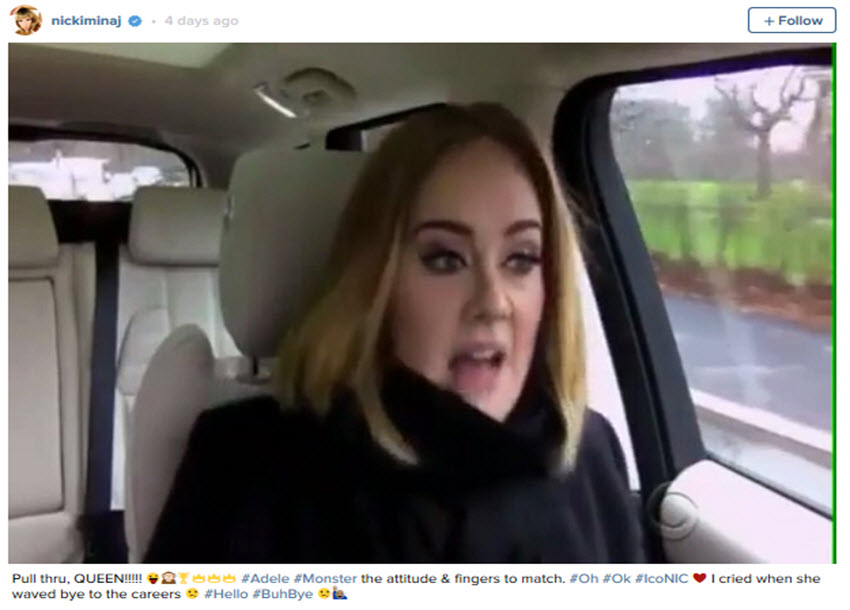 Dear Adele, if this singing thing doesn’t work out you may have a chance at a career in hip hop.

During her appearance on “The Late Late Show” with James Corden, Adele sang a few of her songs, but she also paid homage to the Spice Girls and rapped some Nicki Minaj.

Adele spit some of Minaj’s guest verses on the Kanye West tune “Monster.”

Minaj was so impressed that she posted a clip of the performance on her Instagram account with the caption “Pull thru, QUEEN!!!!! #Adele #Monster the attitude & fingers to match. #Oh #Ok #IcoNIC I cried when she waved bye to the careers #Hello #BuhBye”

She also tweeted “Adele is mad ratchet. I can’t take her.”

Corden is now famous for getting celebs like Justin Bieber, One Direction, Mariah Carey and Stevie Wonder to join him in a car and sing along with their hits and other songs.

Corden’s executive producer Ben Winston told Vulture they flew back to the United Kingdom early for the holidays to make the Adele segment happen. The singer was gracious and loved it, he said.

You can watch the viral clip here: