After marrying Monalisa, 68, Guvnor Ace, 28, kicked out of apartment 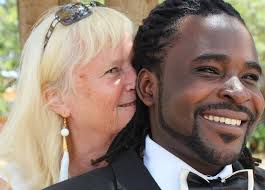 After he hogged social headlines two months ago when he married his 68-year-old Swedish flame, Monalisa Larson, Guvnor Ace has reportedly been kicked out of his Suguku apartment for lack of rent, says Howwe.biz.

According to sources, 28-year-old Ace, born Ronald Samawere, was thrown out last week by his landlord after he got fed up of his empty promises.

Reports further claim the Leone Island singer has not paid rent for over five months.

Ace’s neighbours revealed that the landlord stormed the apartment and threw the Mukadde hit-maker’s belongings outside.

Uganda’s Redpepper says what angered the landlord was the fact that Ace was throwing house parties and inviting friends to drink all sorts of expensive liquor when he still owed large sums of money.

The webloid further reports: “Guvnor Ace has gone back to his mother’s house in the same area,” adding: “His mum is hot happy because Guvnor’s wife has not done anything to help the situation.”

Sources further revealed to the Ugandan site that Ace’s mother was initially against the idea of her son marrying a woman older than her (Ace’s mother). She, however, accepted the romance after the singer convinced her about his love for Larson.

Ace and Monalisa have been together for over a year, and the odd pair got married in August 2015.

Guvnor tied the knot with Monalisa in a civil ceremony held at the Uganda Registration Service Bureau in Kampala before friends and family.

When he spoke to Uganda’s WBS TV about why he married an elderly woman, the Ugandan dance-hall artiste said young girls are a financial liability and some are not genuine.

“I have no regrets, because these young girls will ask for airtime and on sending it, they will not even call you, all they do is to beep,” he expressed.

The singer went ahead and composed a song titled Mukadde in which he heaped praise on his elderly lover.