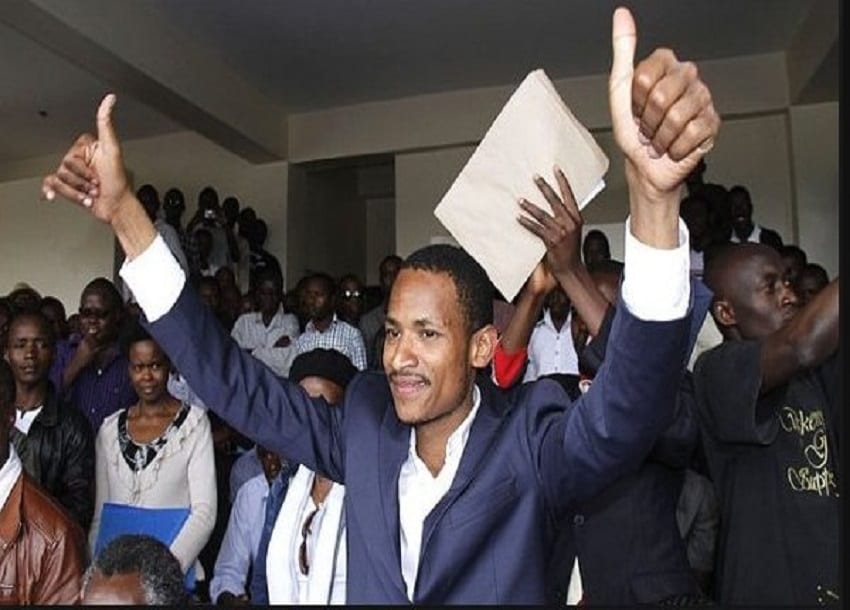 Babu was sworn in for the fourth time as SONU Chair after being declared winner in the hotly contested election that was marred with claims of rigging.

The supporters of his main competitor Mike Jacobs on Friday, April 2 took to the streets to protest Babu’s win.

The flashy UoN student governing council (SGC) leader says he feels that he has lost grip by losing slightly over 5, 000 students’ votes.

Babu Owino has refuted claims that he was involved in election malpractices.

“When they say that I rigged, University of Nairobi has 11 campuses – nine in Nairobi, one in Kisumu and another in Mombasa. I won in 10 out of the 11 campuses. My key opponent Mike Jacobs won in main campus only with a difference of 200 votes.

“With those figures as announced by the electoral commission, I don’t understand the meaning of rigging. University of Nairobi has an 84, 000 plus students’ population. Why is it that the other ten campuses were not demonstrating?” posed Babu.

“I am urging Mike Jacobs to calm down, accept and move on.”

Babu Owino says his key agenda for the University of Nairobi students in 2016 will be to create a rapport between the institution and potential employers so that the students’ body can effortlessly secure jobs.

Mike Jacobs however maintains that the election was fraudulent.

“The election was pure sham and it did not involve any transparency in voting; in most of the stations massive rigging was noticed; if I can remember very well, in a place like CCU which was a voting centre for main campus, I won by 834 votes against Babu Owino’s 283 – the results were sent to me by the presiding officer,” said Mr Jacobs.

Babu Owino says he was reelected as UoN’s SGC chair because “parents and UoN students love him” and that he “might relinquish power in 2017 if he gets a worthy successor.”

“I am like the Paul Kagame of UoN. Kagame has been performing in Rwanda and that is why Rwandans voted positively in a referendum that will make Kagame eligible to vie as president of Rwanda for a third term in 2017.

The third year Bachelor of Law student says he will vie for Embakasi East parliamentary seat and at the same time serve as SONU Chair in 2017 (if he fails to find a ‘worthy’ successor).

“In 2017 if I don’t get someone to hand over power to, I will vie in SONU election in April and in August vie for Embakasi East parliamentary seat; so I will be an MP and SONU Chair at the same time; I am a Jack of all trades.”

Mike Jacobs says it is time for Babu to surrender power.

“He has vied four times and I think that is just enough; everybody should be given a chance. If he has not been able to bring change, then it has been a wasted time. We want things to be different in society; we have been stagnant for the last three years, same problems, same chairman, same people; we just need progress,” said the fourth year student.

Citizen Digital could not independently verify the number of votes quoted by Babu Owino and Mike Jacobs.