Janet Mbugua had the studio in fits of laughter after she pranked Hussein Mohamed by pretending to be in labour during the Monday Special show on Citizen TV.

Janet, who has acted in previous screenplays, pulled off the ruse so well that she sent her co-host into distress.

The two anchors were in the middle of reviewing the responses from the public after the show when Janet grabbed her baby bump and feigned labour pains.

Janet will be leaving the show, which airs on Monday 9:00pm,  as she goes on maternity leave and Jacque Maribe will take her place.

Janet and her husband, Eddie Ndichu, have discussed their pregnancy openly on Janet’s blog and in the September edition of East Africa’s True Love Magazine.

Despite the stigma surrounding pregnancies on TV, Janet did not scare away from her job on the screen.

However, many criticized the anchor on showing off her baby bump.

“News anchor Janet Mbugua should now go out of our TV screen. She shouldn’t assume that we are enjoying her new shape,” read the tweet.

Janet responded, “People like you are a shame to society. I’m proud of my pregnancy, as are many other women. Your ignorance is wanting.” 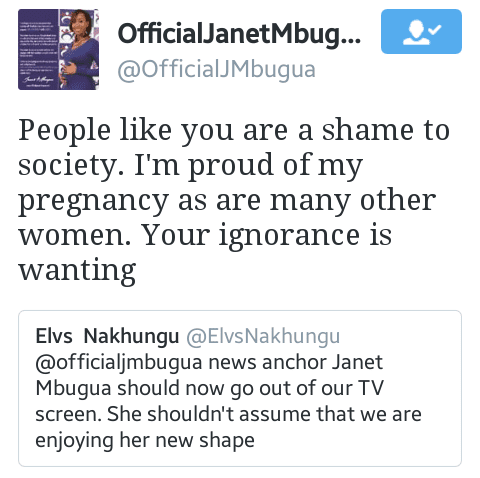 Her fans, however, continued to compliment her saying that it was natural and no one should “hate on her”.

One follower on Instagram was also not shy to mention that her baby bump display was too much.

The follower commented on one of her posts saying that she was emulating the Kardashians and that her pregnancy was not for the whole world to see but only for her husband.

“Tell your sponsors to take a break and leave that belly for Ndichu not the whole world.” She said.

This did not augur well with Janet and she responded, shaming the Internet trolls. “I don’t care for your opinion, you don’t have to follow me”, Janet wrote, “This is for men and women who celebrate transitions,” she added.

On her blog, she wrote a lengthy post on her pregnancy journey.

She shared about her first days being pregnant and the difficulties she endured, saying she was “encouraged by other mothers out there”.

The iron lady, however, left the show saying that she was excited to begin the next chapter in her life.