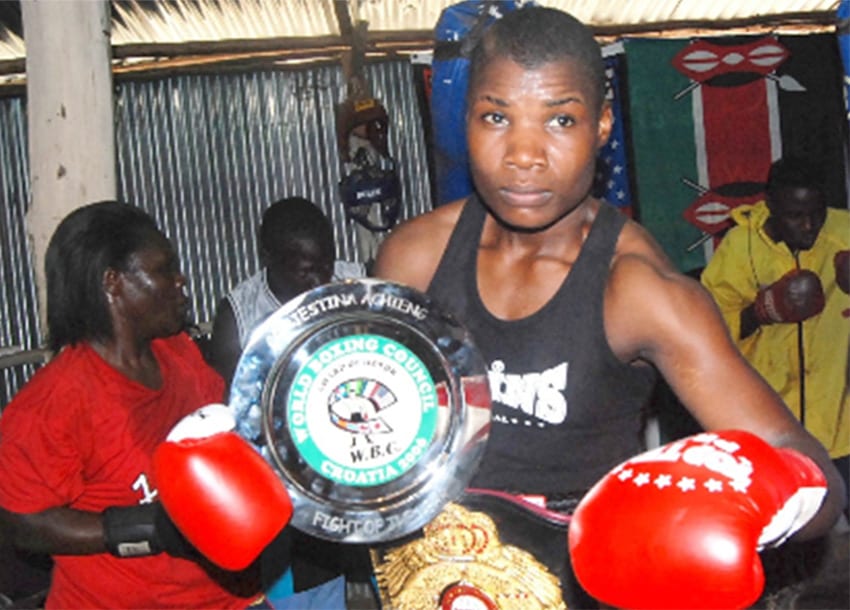 Former middleweight champion Conjestina Achieng’ will on Saturday evening witness a boxing tournament at the Carnivore Grounds in Nairobi.

The event dubbed “Boxing under the Stars” has been organised by Miss Eastlands Nairobi Eveleen Mingoye and Skippers Boxing Promotion to raise funds for the medication of the ailing boxing star.

The event will start at 6pm, and gate charges are Ksh1, 500 per person.

According to Kenya’s Professional Boxers’ Coach Mr Julius Odhiambo, the fighters are drawn from as far as Egypt, Tanzania and Uganda and will face off in middleweight, featherweight, super-middleweight, bantam and heavyweight boxing categories.

Ms Mingoye travelled to Conje’s home at Umiru village in Siaya County Friday morning to bring the boxer to the capital ahead of the tournament.

The fighter, who was at one time ranked the fifth greatest female fighter in the world, has been languishing in poverty, amid poor health at her rural home in Gem Constituency.

In January 2011, the late Conjestina’s father, Clement Adalo, sent an appeal to Kenyans to help him take her to hospital after her behaviour deviated from the norm.

According to her father, Conjestina, nicknamed “Hands of Stone”, had removed her son from school, set ablaze to all her boxing gear and disposed of all the equipment from her gymnasium, which she had opened in 2009.

She was admitted, but later released from the Mathari Mental Health Hospital in Nairobi and her wellbeing has worsened since.

In a recent interview with Citizen Digital, Conjestina’s elder brother, William Ochieng’ said the boxer’s family has exhausted all its financial resources by paying for her medication.

He sent a plea to the government and well wishers to chip in and raise funds to facilitate the treatment of the former boxer.

Conjestina needs close to Ksh2 million per two weeks for her psychotherapy in India. Ms Mingoye and her legal advisor have communicated with an Indian doctor who has agreed on the terms of treatment.

“The doctor said the facility will charge Ksh1.86 million ($18, 200) for 15 days. Her treatment could take 2-3 months. That is exclusive of air ticket and accompaniments,” said the 22-year-old beauty queen.

Miss Eastlands said she took the initiative to help the 38-year-old champion, adding that they have put up a pay bill number 215 212, with account name ‘Rescue Conjestina’, to give well wishers a platform to contribute.

Conjestina’s mother, Getrude Auma Adala, expressed her heartfelt gratitude to the organisers of the tournament, saying she is now hopeful her daughter will regain good health.