From beating poverty to his marriage, Governor Mutua reveals details of his life 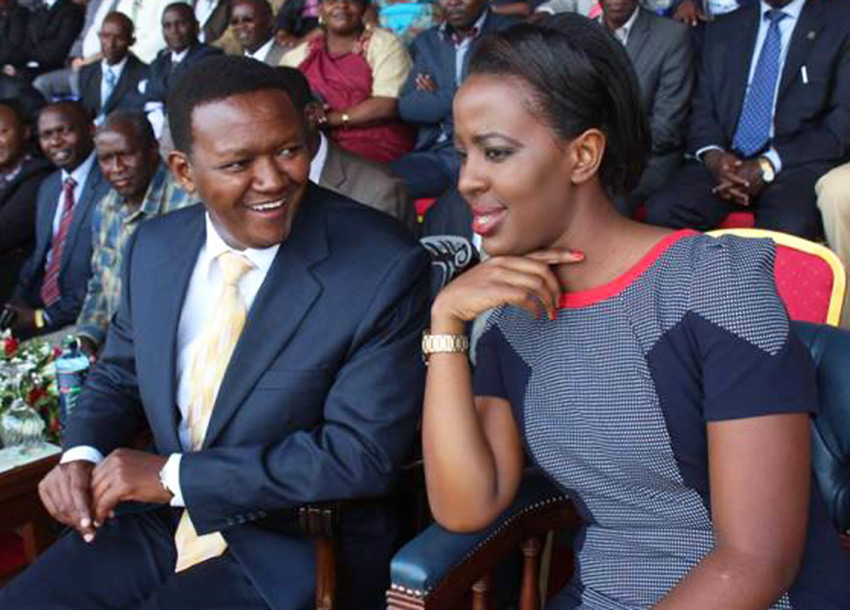 A journey of inspiration is what I would say to describe the growing, phases and achievements of Machakos Governor Dr Alfred Mutua.

The 45-year-old leader has a story to share – a story told exclusively to Citizen Digital in a comprehensive interview recently.

Below are ten things that you probably did not know about Dr Alfred Mutua.

The first born in a family of two (one boy, one girl), Alfred Mutua, like most people,  was born to a humble family.

“I have a sister called Ann. I was born in Machakos, but I grew up in Makina area, Kibera slums in Nairobi; my parents were poor civil servants,” began the governor.

“I grew up with many dreams; my late grandfather always told me that I should not worry about where I am but instead I should be concerned with where I am going. If you are born poor, your parents are, but you are not. You can work hard so that you help your parents move from where they are,” he said in a rather philosophical tone.

He thus embarked on the journey to kick out poverty from his lineage by befriending books.

“When I finished my primary education, I was admitted to Dagoretti High School. While at the institution, I became very active in public speaking and drama; I did well in competitions.”

“I later attended Jamhuri High School for forms five and six. While in Jamhuri, I became the president of the senior debating society; I acted, wrote scripts and travelled a lot since I never missed rugby or football games.

“I was part of the cheering squad, my small-bodied physique couldn’t allow me to play ether sport,” joked the governor.

His quest to lead a life of propriety saw him teach Sunday school at a tender age.

“I started teaching Sunday school when I was young at Riruta Baptist Church; when I was in form five, a group of missionaries from the United States came to Jamhuri High School, and they were impressed by my teachings and I knew God has plans for me.”

“I had dropped out of school in form two because of lack of school fees,” he added.

It’s not the missionaries who came to his rescue at that time but they would come in handy a bit later.

“A mzee of the kanisa (church elder) called Mr Hezron Waithaka actually paid my school fees up to form six. Otherwise I would have been a school dropout,” said Mr Mutua.

The missionaries would later pick up from the point where Mr Waithaka left off.

“The missionaries later wrote to me and asked if I could send them my certificates; which I did. They said: “Good, we were so impressed with your work at the church and we got you a scholarship to come and study in the US. Mark you I hadn’t completed my form six education yet,” narrated Dr Mutua.

But it wasn’t a walk in the park to raise air ticket, he says: “I only secured a visa, but had no airfare. A harambee was organised to raise the money; but you know the harambee of poor people is only attended by poor people so the fundraising realised only Ksh12, 000, the ticket was Ksh25, 000.”

“Trying to raise an additional Ksh12, 000 was impossible!” recalled the governor.

Who then came to his recue?

“One of my family friends called Mr Kavoo Kathuku who worked in a travel agency told me he would talk to some of his clients who had miles which I could use; he did that, and I got the air ticket.”

“I left Kenya on August 11, 1991; carrying my clothes in a suitcase; at times you have to take a leap of faith. When people talk about being hustlers, we know what it is to be poor,” stated Dr Mutua.

He obtained his BA in Journalism from Whitworth College in the United States and his MSc in Communication from Eastern Washington University.

He later received his doctorate in communication and media from the University of Western Sydney in Australia.

“When I was in the US studying, I was so passionate about Kenya; I wanted to study and come back; I did a lot of extra digital courses around 1993/1994 – Photoshop, Desktop Publishing, Dos Programming; and other things that people were not doing.

“I figured out not many people knew about them in Kenya and I wanted to come and teach my people.”

“In 1995 I came back for my internship and Mr Tom Mshindi gave me an opportunity to write for Daily Nation. After the attachment, I flew back to the US to further my studies.

“When I returned to Kenya, I got a job as a lecturer at Daystar University in 1997; I was only 27. I taught media, communication and film making.

“I also did writing for the Daily Nation. I made more money than people who were full time employees.

“I was writing features for Wednesday, Friday, Saturday and Sunday papers. Working hard, fast and doing things has always been in my system. Hii mambo ya kukaa, kunywa pombe na kupiga stories (this issue of grabbing a beer bottle with friends, while storytelling)… they could be good; but only after you have hustled,” said Dr Mutua.

Governor Mutua’s ingenuity isn’t a recent development; he has since childhood worked hard.

“While I was in the US I was making documentaries; publishing and working for TV stations. I worked for all the main channels; I was published in the Los Angeles Times, Seattle Times…, he said, adding: “I also made a documentary called An African in America in 1996. I did a good job in Film Making. I was also one of the top public speakers in the US.”

“While doing my doctorate in Australia, I became a foreign correspondent; I wrote the column Msafiri. I was being paid to do interviews of prominent people around the world. I got arrested in many countries as a journalist; I had the first TV interview with Joseph Kabila; three months after his father got killed in his palace in Kinshasa,” he recounts.

“It was during the time that I worked as a foreign correspondent, having my documentaries published on the BBC; that I was discovered and offered an assistant professor job in Dubai.”

“While I was in Dubai, the government of President Mwai Kibaki took notice of me. The then Minister of Tourism and Communication Raphael Tuju asked me to send my resume, which I did.

I was later interviewed and evaluated by Cabinet, and that’s how I got the job,” he narrated.

Dr Mutua strongly believes that poverty in most instances is self-inflicted situation. When he was younger he engaged in mjengo (construction) work to raise money to fill financial gaps where necessary.

“As I waited to go to form five, my first job was mjengo work. I know how to do koroga; najua kujenga (I can do construction work). I couldn’t sit at home because we were staying in a wooden house and my parents were poor.

I used to build walls and fences in Kawangware. My specialty was kukoroga kokoto na kuskuma wheelbarrow (I was good in mixing gravel, and pushing the wheelbarrow). I used to wake up in the morning, go to Kawangware and wait to be assigned some tasks. Hakuna kukaa nyumbani unangoja kuhurumiwa, fanya kazi (you shouldn’t idle at home while waiting for sympathy; get something to do)! He firmly says.

Governor Mutua agrees with Friedrich Nietzsche that “without music, life would be a mistake.”

“I love hip hop; today’s and old skool. I listen to Drake, August Alsina, Chris Brown, Lil Wayne – he is a bit dirty, but I listen to him.

I also like RnB and Swahili music because I am very proficient in Swahili; I love Bongo – Ali Kiba, Diamond, Lady Jaydee; I listen to them a lot.”

He adds: “It would be wrong if I don’t mention Rhumba; Sauti Sol, Fally Ipupa are basically doing Afro-Rhumba.”

“Lillian is a nice lady; she is lovely, beautiful. a great person but above all, she has passion for other people.

“I like people who believe that life is not just about themselves – it’s what you do for society and destitute people.”

“She has passion for development. Many times we stay awake up to 2am discussing Machakos – where people need water, what we can do for needy mothers…,” he adds.

“She’s always out there looking for groups to help; like now she is very busy looking for organizations which can provide credit financing for some of our women,” he said.

But how did the lovebirds meet?

“I met with Lillian here (in Kenya). My poetry played a huge part in sweeping her off her feet; lazima ukuwe na lugha, otherwise,mambo ingekuwa ngumu! Nilikuwa pia chap chap; wajua ningezubaa, ningekuta mtu amepita naye (one must smooth-talk at one point; otherwise, things would have been difficult; and I am glad I approached her promptly). Kenyan men are good at slicing; you know what I am talking about,” he says amid laughter.