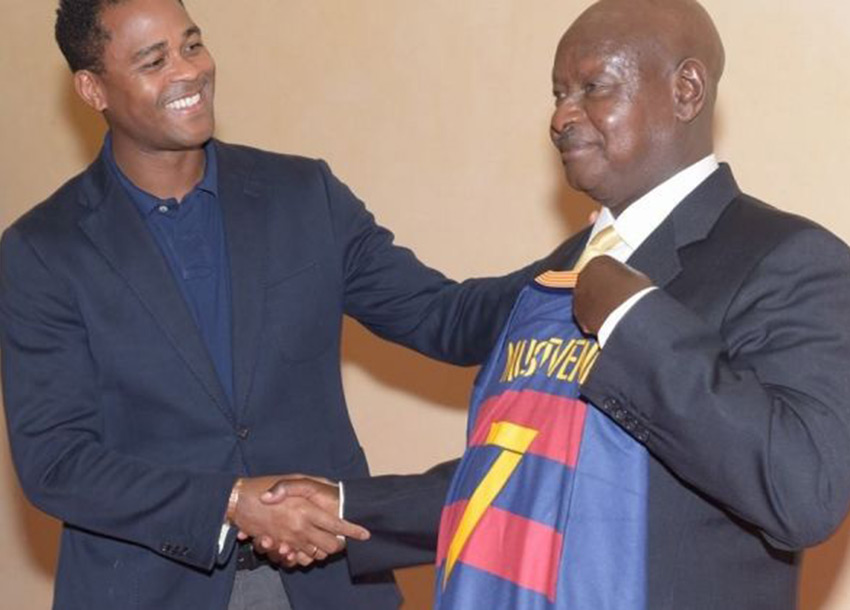 Uganda President Yoweri Kaguta Museveni shocked his guests – FC Barcelona legends Patrick Stephan Kluivert and Louis Garcia – after he confessed being clueless of the existence of the Spanish and world football giants.

The former Barca players recently visited Uganda where they contributed in a campaign aimed at exposing the country’s tourism potential and unique natural assets to 400 million viewers worldwide.

“I now know Barcelona, now that you (Kluivert and Garcia) have come here; I’m not very literate about European club football because I was diverted to do some other work at an early age, though I was very interested in the game at an early age,” Museveni said after former Barcelona captain Patrick Kluivert presented him with a Barcelona jersey (shirt No.7).

Speaking at State House, Entebbe where he hosted the Barca legends for dinner, Museveni showered praises on his country saying: “in all the travels he has made in parts of the world, there is no place that equals Uganda in terms of climate.”

The Ugandan leader commended the idea of Louis Garcia establishing a Sports Academy in the East African country to tap into the potential of the youth in the region.

Museveni also thanked the United Nations Children’s Fund (UNICEF) and Uganda Tourism Board for its efforts in publicising Uganda’s assets to the world.

During the dinner, Museveni handed certificates to the Barcelona legends in recognition of their efforts in trekking the Bwindi Impenetrable Forest in South Western Uganda.

This is not the first time the Ugandan Head of State openly admits being clueless on matters football.

In August, 2015 Museveni  surprised residents of Wakiso District when he said that he thought the national football team (the Uganda Cranes) was a mere club.

Museveni however said he has a lot of passion for the game, and that he was a footballer during his youth.

He added his active participation had been hindered by instability in Uganda.

“I was a sportsman years ago. I used to love to play football, but since 1966 I have been concentrating on war. I have now started going back to sports because of the (prevailing) peace,” the Ugandan President said.