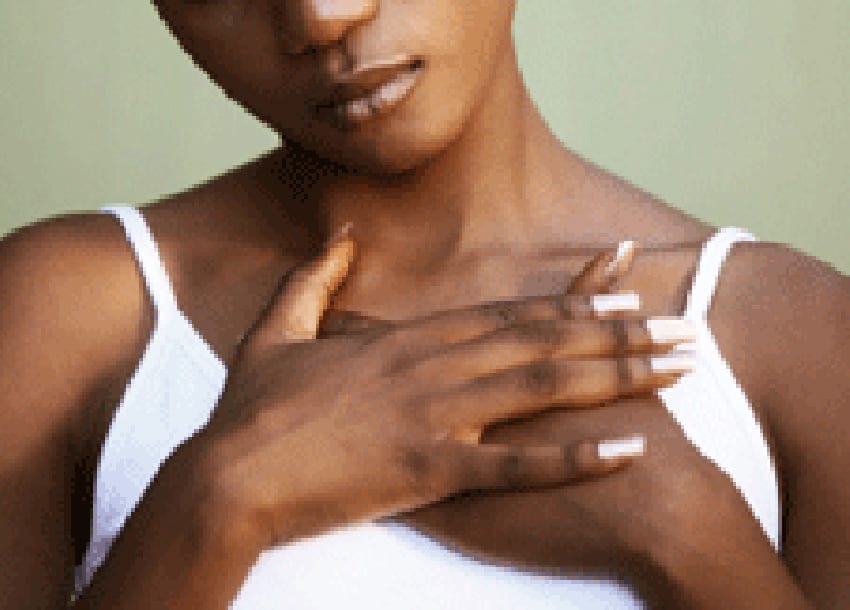 African communities are known to religiously follow their cultures; and different groups of people prescribe rites that one should pass through at different stages in life.

Often, adolescents must undergo the cultural rites to initiate them into adulthood. Most of these rights are meant to prepare them for marriage and family life, but one rite in Cameroon is meant to do the opposite.

Some communities in the West African country have been carrying out ‘breast ironing’ to delay young girls from graduating into adulthood.

They believe that by making a girl’s chest flat, they delay her first sexual experience because men will find her less attractive.

Parents often fear that the girls won’t finish their education if they meet a man and fall pregnant.

According to French photographer Gildas Paré, who recently traveled to Cameroon, the practice is usually carried out at home by female family members or with the assistance of a healer.

The flattening tools include: pestles, spatulas or even stones.

The practice, which was uncovered in 2005, often begins as soon as the girls hit puberty.

Gildas revealed how it is done: “It often starts when the girl is about eight or nine years old. Their family will wrap tight elastic bandages around their chest. They tighten them at night, sometimes during the day too.”

“Another technique makes use of hot instruments. The assumption is that heating these tools and pressing them on the girls will melt the fat,” reveals the acclaimed photographer.

Having interviewed and photographed women who have endured this rite of passage, Mr Paré says that they suffer from self-esteem issues and psychological disturbance.

“They suffer on a daily basis. They can’t stand wearing a swimsuit, so they don’t go to the beach. The physical pain might fade but the psychological trauma doesn’t. Most don’t want to be touched ever again.”

Victims of the practice opened up to Mr Paré about their experiences:

Anne*, 19 years old recalled: “I didn’t understand what my mother was doing. Every day, sometimes three times a day, she would flatten my chest with a hot spatula. She would just say: ‘It’s for your own good.’ It was a nightmare. When she realized it wasn’t working, she used a rock. That was hell. It felt like my body was on fire.”

“A guidance counselor, who I told everything, tried to talk to my mom and get her to stop. I was happy because I thought it was over. But she did it again—with heated fruit pits this time. I packed my stuff and moved to my aunt’s immediately. Sometimes, I try to understand my mother’s actions. It hurts so much when I look at myself in the mirror.”

According to CBS News, Cameroon’s government research shows that “breast ironing” has seen a 50 percent decline since it was first uncovered during a 2005 survey on rape and incest in Cameroon. The 2005 study was conducted by the German Technical Cooperation Agency (GTZ).