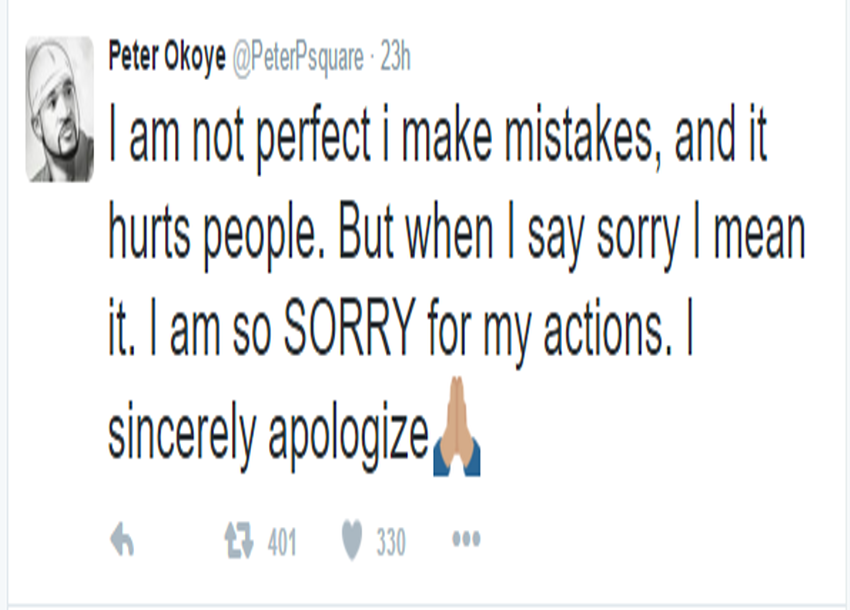 After online uproar following a torrent of tweets that involved Nigerian hit-making sibling duo P-Square Peter Okoye, and his elder brother, Peter has finally apologized about the whole issue.

After sacking his brother on Twitter, Peter Okoye, a member of the hit-making sibling duo P-Square, has finally apologised for his torrent of angry tweets.

In a recent social media post, Peter confessed that he was not perfect.

The renowned Nigerian singer hit out at his elder brother, Jude Okoye, on Twitter calling him a mere ‘attachment’.

Jude, through his Northside Entertainment Company, has been managing the famous duo since it came into existence – a partnership that Peter is keen to terminate.

However, citing lack of proper business structures, the Personally star said that he wanted nothing to do with Jude’s company, going further to warn the public against transacting with his elder brother on P-Square’s behalf.

Upset about his brother’s tweets, Jude took to his social media pages to criticize his brothers for airing their dirty laundry in public.

Could this apology mark the end of the sibling feud? Only time will tell.