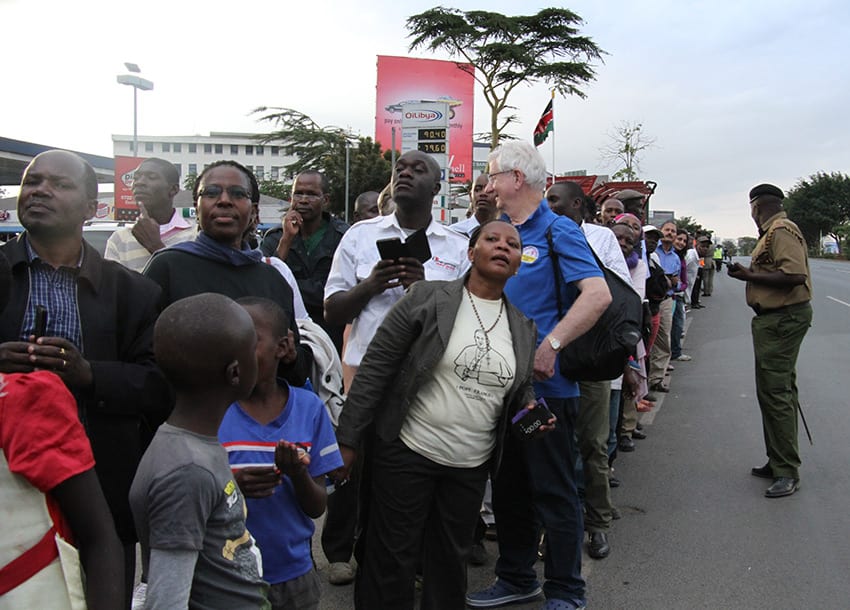 Kenyans from all walks of life braved the cold on Wednesday evening and converged in groups along Mombasa Road to welcome Pope Francis, who arrived in Nairobi for a three-day visit on his maiden tour of Africa.

Faithful carrying banners with images of the holy father, and others holding palm leaves stood on both sides of the highway just to have a glimpse of the Pope.

Braving the heavy security present, Kenyans stood close to the road hoping for a once-in-a-lifetime chance to see the pope.

President Uhuru Kenyatta’s convoy sped along Mombasa Road at around 4:35pm as he headed to the Jomo Kenyatta International Airport to welcome the Pope.

At around 5:15pm, the president’s motorcade made its way back to the State House after receiving the head of Catholic Church.

A while later, Pope Francis’ motorcade passed on its way to the reception at State House, with the holy father waving at the crowd that had gathered to see him.

The Pope arrived at State House a few minutes to 6pm where he was accorded a 21-gun salute and later addressed the nation, his key message to Kenyans being: “Cohesion, integration and tolerance with others.”