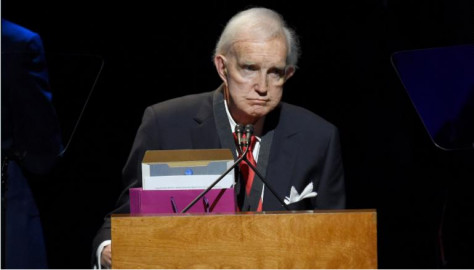 Ralph Emery at the Country Music Hall of Fame Medallion Ceremony in Nashville on October 20, 2019.

Ralph Emery, a legendary radio and television personality in the world of country music, died Saturday at the age of 88, according to the Country Music Association.

Emery was born on March 10, 1933, in McEwen, Tennessee. He began his career in the early 1950s at small radio stations in the state before going on to become one of the most famous TV and radio personalities in country music, including announcing on the Grand Ole Opry from 1961 to 1964, according to the Country Music Hall of Fame.

"Ralph Emery's impact in expanding country music's audience is incalculable. On radio and on television, he allowed fans to get to know the people behind the songs. Ralph was more a grand conversationalist than a calculated interviewer... Above all, he believed in music and in the people who make it," Kyle Young, CEO of the Country Music Hall of Fame and Museum said in a tribute on its website.

"Ralph Emery was often better known than the stars he introduced to larger and larger audiences over the years as Country Music's foremost ambassador," Sarah Trahern, Country Music Association CEO said in a statement. "Our format had no better voice over the years than Ralph, who treated Country Music and its stars -- many of whom went on to become his friend -- with the kind of dignity and respect they deserved for decades. As a Country Music Hall of Famer, he will be remembered among so many of the artists he supported throughout his career."

Loretta Lynn, country music legend and "dear friend" of Emery, tweeted, "It breaks my heart to learn of Ralph Emery's passing. Ralph and I go way back. He was a Nashville original and you cannot underestimate the role he played in the growth and success of country music. He made you feel at ease and interviewed everyone just like an old friend."

In a tweet, the City of Nashville also mourned Emery.

"Your legacy will live on forever, Ralph. Thank you for everything you've done."