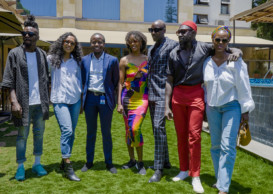 The docu-reality show gives viewers a front seat to the behind the scenes look at Sauti Sol’s endeavour to impart their learnings to the next generation of musicians through their Sol Generation record label.

It explores the lives of Savara, Chimano, Bien, and Polycarp as well as the stars of Sol Generation; Nviiri, and Bensoul and the team behind their management.

It also delves deep into the music-making process as well as the elements of their personal lives that make them tick.

For the first season, Sol Family went on to show the audience how their legendary acts as mentors in the music industry, leaders in the company, their spouses and them as role models in the society and friends in their circle.

Season 2 will dive deeper into their mantra; DOPE (Discipline, Order, Passion & Excellence) and how they apply this principle in their daily lives, personal relationships, businesses and musical prowess.

It will trail what it takes for them to stay at the top, acquiring business assets, finding and staying in love, perfecting their craft, re-connecting with family, dealing with industry heat and so much more.

Talking about the new season, Lady Mandy said: “I love it (Sol Family) because I get to work with my family. We don’t get to do that as often so it’s a pleasure to be able to do that. And to bring their (Sauti Sol) audience into a small part of our lives, where they get to see their side of just being human, and not just the people who entertain them.”

On her part, Yvonne Endo said; “We’re planning to still be true to ourselves in front of cameras but also getting to learn more from people around me. It’s been an experience for me, and I’ve been enjoying it so far.”

The new season will definitely be bringing more drama but according to Chiki, fans shouldn’t expect any controversial drama or fallouts.

“We will give you drama but it won’t be ‘don’t talk to me’ kind of drama. We don’t fall out that often, we’re genuinely close and we respect one another. We get together on a regular basis. I think when you really put yourself out there, you welcome people to have an opinion. I was really skeptical about that but Eugene has been really amazing in allowing us to just show African love. For all of us, that was really important – brotherhood, romantic love, love for music, love for one another, love for Kenyans.”

For Producer Eugene Mbugua, Season 2 is exciting because everyone is a bit used to the camera now. “They know how to express themselves more now. You’ve seen the personas come out strongly. Season 2 has more of that.”

Sol Family will air every Monday starting on Monday March 15, 2021 on Showmax.

Eugene, the creator of the show, is a 30-year-old content creator, writer, producer and director who was the youngest producer with a show on Kenyan national television when at 22 his first TV show Young Rich premiered on K24.

He has gone on to create and/or produce more television shows among them Young Rich, Get in The Kitchen, Our Perfect Wedding, Stori Yangu, My Friend, Being Bahati, Foods of Kenya and The Best Of.