This is the reason Bro Ocholla is trending

Ochieng Ocholla unwillingly landed himself on the Twitter trends pane on Tuesday morning after he sent ‘tweeps’ (Twitter people) into fits of laughter with his leaked WhatsApp message.

A screenshot from a WhatsApp group named ‘Embakasi Prayercell’, which Ocholla was a member of, made rounds on social media.

In it, Ochieng intimates raunchy details of what he would like to do to a romantic interest: “You seem to love my voice. This voice will whisper asking how you are feeling when you will be having… (unprintable content).” 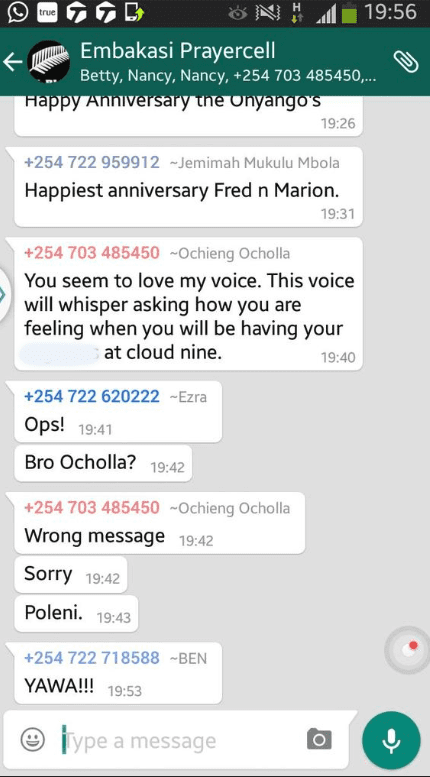 Ochola’s name shot to the top of the trend with tweeps praising him and bashing in equal measure for his unfortunate gaffe.

@ArcherMishale said,”Bro Ocholla, its me, Betty. Imagine I’ve never heard your voice. Ati you said you can do whaaaat?*swoon*”

"Bro Ocholla, its me, Betty. Imagine I've never heard your voice. Ati you said you can do whaaaat?" *swoon* pic.twitter.com/l5kKC9g1XH

@VINKIBET said, “RT if you can spot Bro Ocholla”

RT if you can spot Bro Ocholla pic.twitter.com/9MBDGcUz94

@Jemalito said, “The devil is trying to bring Bro Ocholla down…”

@SirAlexas said, “But those who have met bro Ocholla in real life know he is a prayerful guy.”

@Shiko Nguru advised Brother Ocholla, saying, “Bro Ocholla should have followed up that message by quickly saying: “Brothers and Sisters in Christ, beware of the many forms of the devil!”

Bro Ocholla should have followed up that message by quickly saying: "Brothers and Sisters in Christ, beware of the many forms of the devil!"

Social media bigwig, Cyprian Nyakundi, said that the controversial message was a not a mistake. Instead, he alleged that Ocholla had devised an ingenious plan of getting himself out of the prayer group.

Citizen Digital attempted to get in touch with Ocholla for a comment, but he did not answer the call.

Many people have fallen prey to sending the wrong message to the wrong person and this could be detrimental to your life.

If you are in the habit of sending texts to the wrong number, try your luck with these two tips/tricks.

The first way is to switch off your data before the message leaves your phone and goes on to the WhatsApp server.

However, this is easier said than done. Your internet connection has to be really slow to be able to do this as WhatsApp messages travel quite fast.
Another way to not let the other person read your message is blocking the recipient before he/she has read your message.

Once blocked, the WhatsApp server would keep the message on its server for about 30 days, and it would not be relayed to the recipient.

You can then unblock the person after a month, if you wish. Rest assured, that person would not be able to read the message you inadvertently sent.