Uproar on social media after KWS kill Mohawk the lion 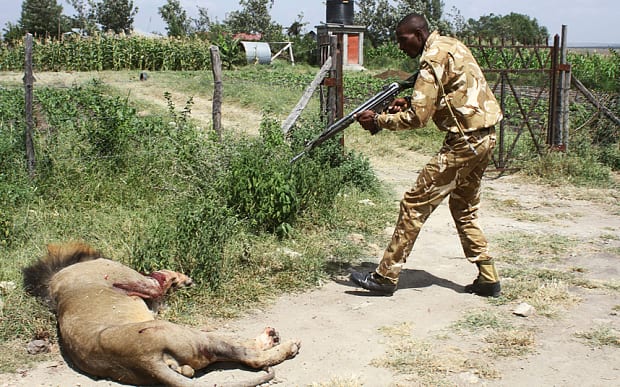 Kenya Wildlife Service (KWS) on Wednesday killed one of  Nairobi National Park’s most famous lions after it strayed into Isinya town, attacking a boda boda rider.

Irritated by the killing of the endangered feline, Kenyans took to social media to protest the killing using the hash tag #JusticeForMohawk.

A majority of the social media users asked why KWS did not sedate and transport Mohawk, as other wildlife services do globally.

Others opined that the frequent incidents of lions straying into the city could be caused by encroachment into the Nairobi National Park.

Below are some of the tweets from the Twitter chat:

#Mohawk the lion should be renamed to 50 cent, because he took 9 bullets too. Sad story though.

I still don't understand why the KWS ranger didn't use tranquillizers and then relocate the lion instead of shooting him dead?#Mohawk

RIP #Mohawk Honestly @kwskenya it takes you 3 hours to get to the scene then you kill the lion. Well done!

So the lion killed #Mohawk has never witnessed arsenal being epl champion since it was born 13. years ago

#Mohawk the lion took 20 live bullets because he acted wild…but he is wild! Still no sufficient explanation for bringing down the big cat.

It is not enough for KWS to shoot dead #Mohawk, they then issue a statement blaming the lion for getting itself shot. #fb

The @kwskenya story on #Mohawk doesn't add up. Which cat caused more imminent danger? Mohawk in Isinya or the Lion that strayed to cabanas