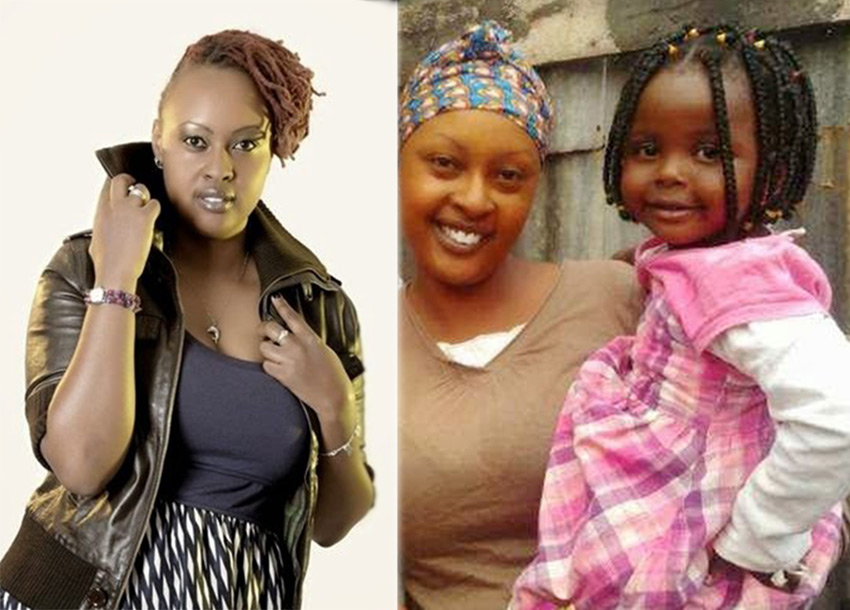 Wanjiku ‘Shiks’ Mburu, better known to many as Mama Baha on Citizen Television’s Machachari is one interesting woman.

Unlike many celebrities, her life is not an open book, and this writer had to dig deep to unravel the intriguing story about this #WCW.

The following are ten fascinating facts about her:

Wanjiku has a Christian name, but rarely uses it; reason being: “I am very proud of the Kenyan heritage; that explains my name.”

The last born in a family of five (three boys, two girls), was born and raised in Ongata Rongai, Kajiado County. She has fond memories of her ‘hood’.

But first, are social media claims that Rongai is equally inhabited by wild animals and humans true?

“My goodness; what is that notion about? Everywhere there are wild animals – a cockroach, a rat… But at Rongai, we have kept our nature with us. Growing up, the animals were freer, they weren’t restricted,” recalls Wanjiku.

“Where I grew up, we made the roads by ourselves. Barabara ilikuwa inaishia Mbagathi. Anytime you approached Rongai, you’d be sure to come across giraffes, zebras, warthogs. Around my place there were hippos, crocodiles… The hippos could raid people’s maize plantations; alligators could eat people’s goats…” recounts the actress.

Living close to wildlife had an added advantage as Wanjiku had an opportunity to taste game meat: “I remember villagers slaughtering and eating a hippo that had been terrorising people’s crops. I ate the meat; it was sweet!”

Shiks, as close friends call her, attended Consolata and Ole Rai primary schools. For her secondary education she went to Loreto Kiambu School.

Wanjiku says Rongai was sparsely populated at that time, and she did not have age mates around her area to play with.

Consequently, she spent most of her childhood indoors: “I was a compound area kid; I did not play the normal kids’ games because there were no children to play with.”

Things, however, changed when she joined Ole Rai Primary school. Like most kids growing up during that age, she played Kalongolongo; but surprisingly not her trademark mother role – like in Machachari.

“Ati nicheze kama mama? Where, how, why? I was the one beating people – I was huge and tall; so I played a policewoman or a robber,” she said.

Growing up, Wanjiku looked up to her elder brothers for guidance and over time she acquired a lot of attributes from them. This, she says, led to her becoming the tomboy she is today.

“I fancied riding the bicycle, playing poker, grazing cattle and tilling the farm with my brothers. A lot of people mistake me for a Maasai,” confessed Wanjiku.

Because of this background, femininity has been a bit of a challenge for her: “Until today, I have not embraced my feminine side; I am trying to; but I only see it coming through as ‘Mama Baha’ on Machachari. Once I am done playing the role, I get back to myself. “Msichana saa ngapi?”

Even on the show, acting in a motherly and feminine manner is a bit of a challenge.

“I see my feminine side to be somehow boring; people expect me to sit, behave and talk in a certain way… Sina hiyo time.”

If you’re planning to visit Shiks and ask her to cook for you, woe unto you! She’ll hear none of that.

“You’d catch me changing a car tyre, but not cooking. My mum accepted that and has moved on.”

Her dislike for kitchen duties is not a recent development; she’s had an aversion for such tasks from childhood.

“I remember there’s this time mum told me to cook chapati. She had kneaded the flour; and left me to do the cooking. Hee! I cooked the first chapo, and it turned out to be very tough! I was ten years old then. I put the dough in a plastic paper and threw it in a pit latrine, na nikasahau hiyo mambo. The flour was 2kgs,” recounts the actress.

What did her mum do to her when she returned?

“When she arrived home in the evening and asked me about the chapatis, I told her they were in the toilet. She was shocked and vowed never to ask me to cook again!”

Her action would have attracted a beating from most African parents. Why did her mother spare the rod?

“Hakunichapa juu ningemchapa; understand nilikuwa nafanya karate,” she joked. Shiks burst into laughter, adding: “My brother was a black belt holder, and so he taught me the ropes.”

When you meet Shiks, she first puts into consideration your gender. If you are male, you are sure to hit it off, but if you are female, lengthy silences will rent your discourse.

“I have 1022 male friends; and that’s just it. I think I got a lady friend recently; and that pressure came from my male friends. They could say: “na wewe, hata dame huwezi tuletea…” said Shiks.

She has her own reasons for her preference for male company; she says: “Men can have a conversation and in their presence, I will be very comfortable. I like them because they have no pressure. When you fall out, you square it out there and then; ladies would come back to you seven years later saying: “We unajua ulinikosea…”

These reasons have led to Shiks preferring male company: “Ukitaka kunitesa, niweke mahali kuna madame. My male friends have molded me into a strong woman.”

She, however, admits she is learning how to live with female company.

“When I take time and just sit with my female colleagues, striking a conversation with them is such a task! At least now, I am learning how to strike a chat with them.”

“I prefer watching live football action. In Kenya, almost everyone supports Gor Mahia. Personally, I prefer a team that not everyone is cheering, that’s why I have a fetish for AFC Leopards.”

No one doubts Wanjiku Mburu’s acting prowess, ingenuity and skill. She says her soft spot for acting began at a very tender age of 7.

It is this dream which would later see her shortchange her cabin crew course in college for an acting career at the Kenya National Theatre.

“I knew I wanted to become one of these three things: an actress, a model or an air hostess. Even in school, the things I used to excel in were languages.”

Because she knew her drive in life, Wanjiku turned down education in the United States.

“When KCSE results were out, my dad suggested I go pursue higher education abroad; but I refused. He thereafter enrolled me for a cabin crew course; which I did for a short stint before embarking fully on acting,” she said.

Now that she had fully committed to acting; how did she land a role in Machachari?

“I watched one of Machachari’s repeat programs on a Sunday. I saw akina Govi and Baha acting and I was really moved. I actually shed a tear at the massive talent the two exhibited. I could not believe their giftedness (sic) – it reminded me of my younger days.”

This chance-viewing prompted her to ask God for an opportunity to work with the talented youngsters.

“I even prayed to God and asked Him to unite me with the two children one day. A week later, a friend of mine, Naomi Kamau, told me that there was a role which was up for auditions. I thought it was in Makutano Junction, but later I learnt it was in Machachari.”

So how did she feel when her prayer came true?

“Goodness, I was excited; nikasema hata kama ni kukuwa runner, naenda hiyo Machchari. I auditioned as Mama Baha and made it.”

Being the tomboy that she is, how did score the motherly role?

“I credit God for it. I also have the talent of getting into character seamlessly. The moment I get into my costume, I change into that person.  When I wear a dress I will be a woman, trust me.”

Her success in acting can be attributed to her keenness to understand each character she portrays.

“Before I even audition for any role, I inquire a lot about the character they want so that I know what to put on – the costume will automatically inspire my acting; the moment navaa hiyo kitambaa kwa kichwa, ninachange; I don’t know how.”

Besides her inherent talent, she says her mother inspires her acting too.

“The character I portray in Machachari is my mum; I also borrow a lot from women in society.”

“Terrence Howard is my ideal actor – there’s something he does with his eyes; which he uses to communicate – you feel his role. Denzel Washington is also very good at transitioning from one character to another,” stated Wanjiku.

‘Mama Baha’ is an introvert, and many a times does not like the attention that comes with her status as a celebrity.

She has, as a result, devised a means to keep her unrecognizable when she is in public places.

“In all the roles I play, I don’t want to reveal my hair because people will easily identify me. Most times, people mistake me for a person they studied with.”

“Quite often I’ve bumped into fans, and they tell me: ‘you look very familiar; kisha they ask me: ‘which college did you attend?, nasema; ‘which high school?, nasema… but the person still feels he/she met me somewhere… he then asks if I know him, I respond on the negation… but when I smile a bit, he says: “Aaah, kumbe ni wewe Mama Baha! Hukai hivyo kwa TV, wewe ni m-beautiful… kisha nashindwa kwani kwa TV nakaanga aje?”

Her smile, according to fans, is her trademark: “Watu wengi wanasema niki-smile, wanaona meno ndiyo wanajua ni zile za Mama Baha. When my lips are pressed against each other, no one can link me to the character – Mama Baha.”

She says such incidents have reoccurred quite often to an extent she’s mastered the sequence.

“Nakuwanga nimejua hii script… for women after realising it’s me, they’d say: ‘Thank you Mama Baha, you teach us very well on how to raise our kids. But, wait, ‘watoto (Baha and Govi) wako wako wapi?’ When I tell them I have no kids, they don’t believe me.”

She however says she is very fond of Baha and Govi.

“The children have formed a great part of me; until sometimes when I hear Baha is in a mess, I rush to where he is. It hits me later I should be calling the real dad to sort the issue out. Millie calls me mum, and when we are with her mother, she calls her Gathoni; mimi ni mum; so when she utters the word, both of us turn to look; but she clarifies: “si wewe (Gathoni), ni mama wa TV.”

Wanjiku Mburu is not dating. Reason being: “At times someone just needs to take a break from relationships and tries being single to see how it will be. So far, so good. I have been single for one year now.”

“I am growing stronger by the day; if you look at me, sikai kama mtu amedhoofika; niko tu sawa,” she affirmed amid laughter.

She however has qualities she prioritises in a man.

“If I were to date a man, I would go for one who appreciates me for who I am; even in my tomboy nature. Above all, he should be honest and loving,” she concludes.