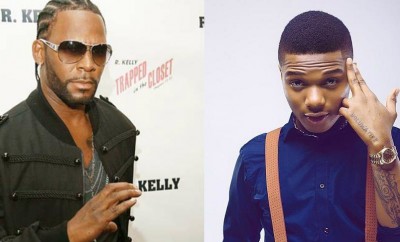 The new album sees Wizkid duet with the hit maker on the 14th track titled I just wanna thank you.

However, as noted by Music Times, the sales for The Buffet have been slow moving in comparison to Black Panties, which the Chicago singer released back in 2013.

As a result, Kelly was moved to send out a video message to fans via Facebook, urging them to support his most recent studio effort.

The 48-year-old crooner had even gone on Huffington Post Live to promote his album but instead made headlines by walking out of the interview.

He walked out after the host Caroline Modarressy-Tehrani relentlessly questioned him about the numerous claims that he had sexual relations with underage girls.

In 2008 the Ignition singer was put on trial for 21 counts of child pornography, with many of the victims being under 16-years-old.

Commenting on the sexual content of his lyrics, Tehrani attempted to ask Kelly whether the sex abuse controversy was affecting the sales of his latest album.

Realizing where the line of questioning was going, Kelly snapped but persistent, the Huffington Post Live host reframed the question and this served to anger a visibly agitated Kelly, prompting him to threaten to walk out of the interview.

“If the next question is something negative out of your mouth, with all due respect, that’s exactly what I’m going to do (walking out),”threatened the I believe I Can Fly singer.

Kelly continued to warn the host stating that he didn’t appear on the show to be grilled but once again, Tehrani did not relent.

Trying to change the course of the interview, Tehrani announced that she was going to play a video question from one of the singer’s fans.

At this juncture, a livid Kelly rose from his seat and began to take off the lapel microphone.