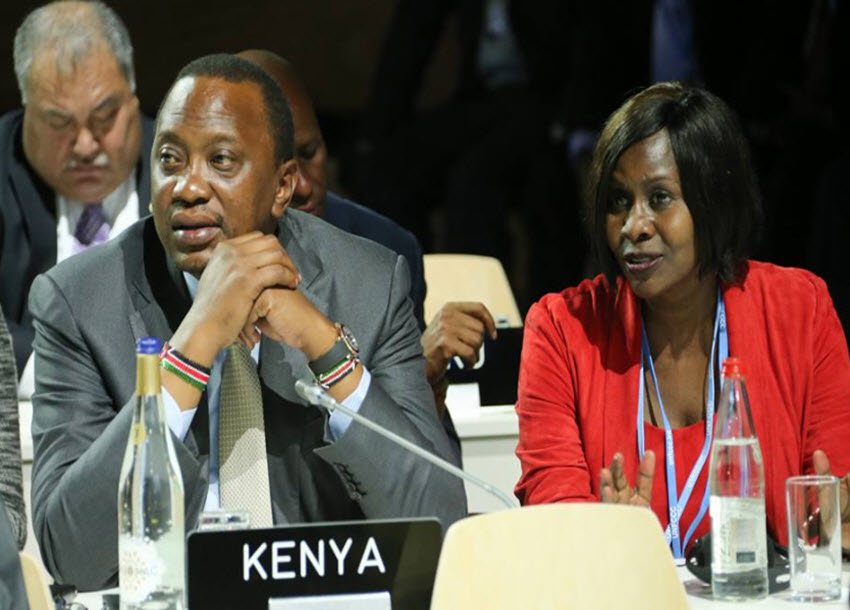 African leaders were optimistic on Tuesday that world leaders meeting for COP 21 in Paris would reach a historic legally-binding climate change agreement.

In a day dominated by African concerns, leaders at the UN Climate Change summit, better known as the Conference of the Parties or COP 21, launched the “Africa Pavilion”, which provides an avenue for the continent to address its Climate Change concerns.

African leaders also said they would intensify their drive to develop renewable energy, with regional lender African Development Bank (AfDB) saying it would dedicate 25 per cent of its funding to renewable energy.

“Kenya is already impacted negatively by climate change.  This is an important opportunity we have to reduce greenhouse gases, especially carbon,” President Kenyatta said in response to a question by media in Paris.

“We remain optimistic that Paris will produce a legally-binding agreement that will limit global warming to 1.5 degrees celcius,” the President added. “Kenya is deeply committed to playing its role on the continent, and beyond, on this subject.”

Kenya has been praised at the COP 21 talks for its efforts on climate change, especially its concerted drive for green energy. Kenya’s tree cover stands at 7.2 per cent against a target of 10 per cent, while more than two-thirds of Kenya’s power is green.

More than 150 leaders are attending COP 21, and a total of 195 countries are represented. The unparalled attendance partly reflects that the globe views the climate change as a crisis, and is also showing solidarity with France after Paris bomb attacks.

On Monday, President Kenyatta addressed COP 21, and pressed world leaders to leave Paris with firm commitments. He specifically urged them to listen to Africa, and provide financing, technology and capacity building required for vulnerable developing countries to cope.

President Kenyatta also met Prince Charles, the British heir to the throne, on Monday. The Prince lauded Kenya’s efforts in wildlife conservation, and particularly noted the sharp decline in elephant poaching in the last year.

Environment CS Professor Judi Wakhungu is accompanying the President. She was much in demand on Tuesday, taking interviews from Kenyan and international media – ranging from COP 21 to saving Kenya’s rhinos and elephants.

UN records show that Kenya was among the first developing nations to submit an ambitious ‘Intended Nationally Determined Contribution’ (INDC) to the UN Framework Convention on Climate Change (UNFCCC) Secretariat, which confirmed its commitments to emission targets.

Despite the fact that Kenya contributed a mere 0.1% of the total global emissions, it has pledged to voluntarily take national measures and actions for emission reduction and for enhancing adaptation to climate change.

Some of the voluntary domestic measures and actions which government had taken included expansion in geothermal, solar, wind and other renewable and clean energy options.

The objective of Paris Climate Change Summit is to give a strong political momentum to the climate change negotiations, which include the long-term global goal of stabilising the global temperature increase to 1.5 degree Celsius.

France on Tuesday pledged $2.1 billion to Africa to develop renewable energy and increase the continent’s access to electricity. Kenya is likely to benefit from these funds.