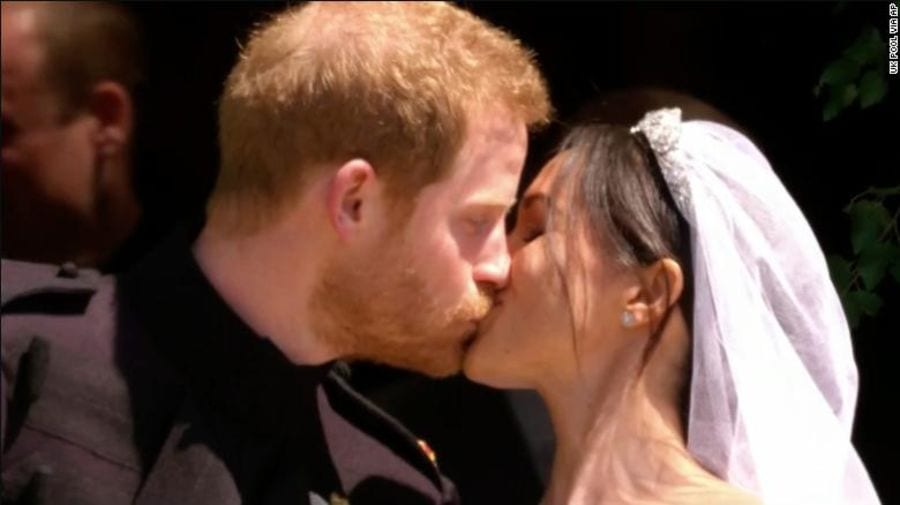 Prince Harry and Meghan Markle, now the Duke and Duchess of Sussex, are officially married.

Britain’s Prince Harry and American actress Meghan Markle were pronounced husband and wife on Saturday by the Archbishop of Canterbury in a glittering union that brought a measure of modern Hollywood glamour into the 1,000-year-old monarchy.

The star of the TV drama “Suits” walked unescorted in a pure white, long-sleeved dress to the middle of the 15th-century St George’s Chapel in Windsor Castle, where the heir to the throne, Prince Charles, accompanied her towards his son, waiting at the altar.

After exchanging vows to love and to cherish “till death us do part”, Harry, 33, sixth-in-line to the British throne, placed a ring of Welsh gold on Markle’s finger before a congregation including Queen Elizabeth, senior royals, and celebrities including U.S. media mogul Oprah Winfrey.

“In the presence of God, and before this congregation, Harry and Meghan have given their consent and made their marriage vows to each other,” Archbishop of Canterbury Justin Welby intoned.

“They have declared their marriage by the joining of hands and by the giving and receiving of rings. I therefore proclaim that they are husband and wife.”

Below is live text from the ceremony:

Prince Harry and Meghan Markle are now standing face to face at the high altar, where they are saying their vows.

The marriage vows are taken from Common Worship, the Church of England’s standard liturgy, first published in 2000.

It is a break from tradition: For their 2011 wedding, Prince William and Kate Middleton chose a slightly amended version of the vows from the 1662 Book of Common Prayer.

After Reverend Michael Curry’s impassioned sermon, Karen Gibson and The Kingdom Choir sang, “Stand by Me” from the west end of the chapel.

Gibson founded the Christian gospel group in southeast England. It’s made up of a group of local artists dedicated to creating a sound that demonstrates the community they share.

It has been performing at home as well as internationally for more than 20 years.

Bishop Michael Curry was trending on Twitter in the United States after he gave a powerful performance at the royal wedding that mentioned Martin Luther King Jr. and slavery in America, Reuters reports. 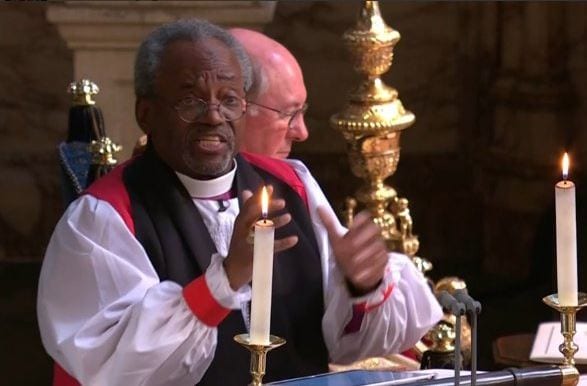 American Rev. Michael Curry is delivering an address that will start and end with quotes from Martin Luther King Jr.

Curry is the Episcopal Church’s first African-American leader. He rose to fame following his 2012 sermon “We need some crazy Christians,” which went viral and was turned into a book.

He has worked extensively on issues of social justice, marriage equality and malaria prevention.

Diana’s eldest sister, Lady Jane Fellowes, is now offering a reading from the Song of Solomon.

She also gave a reading at Princess Diana’s funeral in 1997, and has rarely made public appearances since her sister’s death.

2:11pm Meghan Markle says she takes Prince Harry to be her husband

2:10pm Prince Harry says he takes Meghan Markle to be his wife

Meghan’s tiara is her “something borrowed” 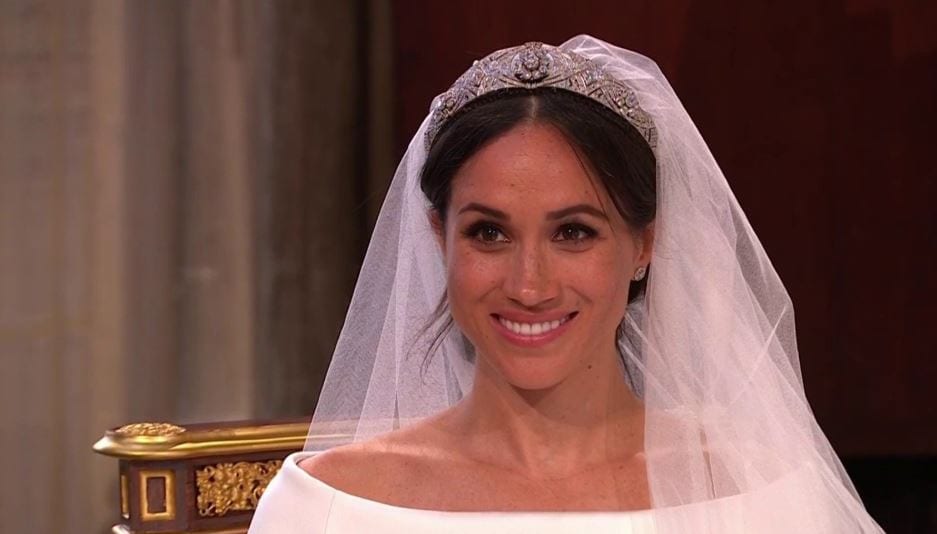 2:05pm Prince Charles accompanies Meghan Markle as she walks down the aisle in St George’s chapel 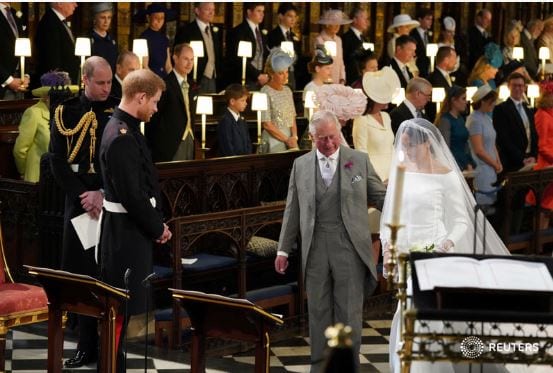 Meghan Markle decided not to chaperoned for much of the procession down the aisle of St. George’s Chapel, and walked down part of it alone.

An orchestra and trumpeter played as soprano Elin Manahan Thomas sang “Eternal Source of Light Divine” by George Frederick Handel, casting an ethereal and haunting atmosphere over the start of the ceremony.

2:02pm Meghan Markle just got to the chapel 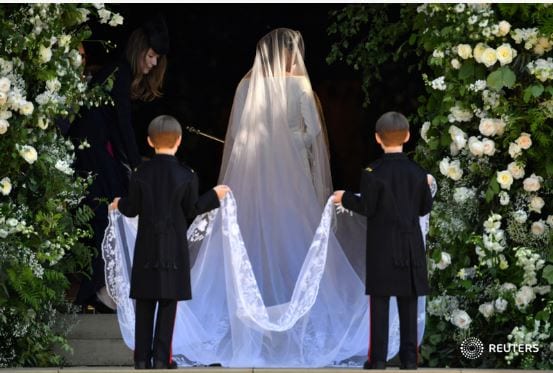 2:01pm The bridesmaids and pageboys walked in with their moms

The bridesmaids and page boys — all children — just arrived at the chapel. They were accompanied by their mothers.

Princess Charlotte and Prince George, Prince Harry’s niece and nephew, were among them, with their mother, Catherine.

2:00pm Duchess of Cambridge arrives at the wedding of Prince Harry and Meghan Markle with Prince George and Princess Charlotte

1:57pm The Queen has arrived at the wedding of Prince Harry and Meghan Markle

Queen Elizabeth just pulled up to the chapel for the royal wedding with Prince Philip, Duke of Edinburgh. She’s in a bright lime silk dress with a matching hat. 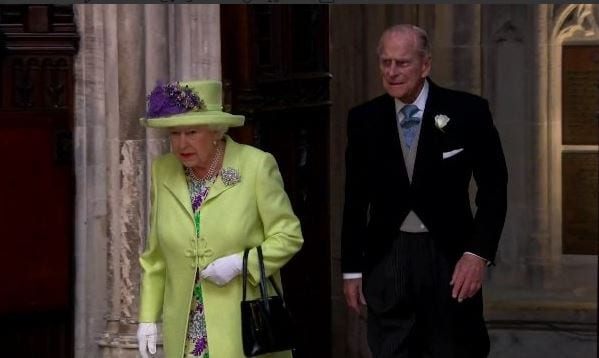 Prince Harry’s father, Prince Charles, is arriving at the chapel alongside his wife, Camilla, Duchess of Cornwall.

She rode with Meghan to the chapel, but got out after the car drove past the crowd at the long walk. 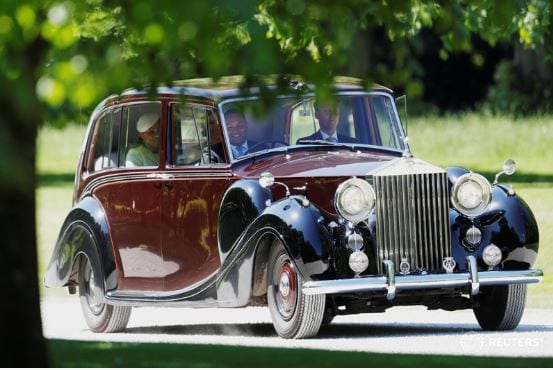 The car has arrived at the long walk of Windsor Castle. The walk is lined with cheering crowds.

After driving up the walk, her mom will get out of the car, and her bridesmaids — who are all young children — will get in.

Prince Harry’s divorcee aunt is at his wedding. She wasn’t invited to his brother William’s nuptials.

Sarah Ferguson, Harry’s aunt who is divorced from Prince Andrew, is at today’s wedding. She’s wearing a dress with pink trim.

Her absence from the guest list was especially odd because her children, Princesses Beatrice and Eugenie, were invited. 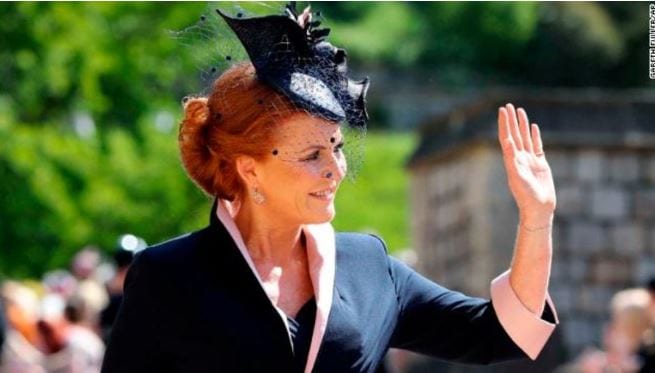 Wearing Household Cavalry uniform, Prince Harry has arrived for his wedding day. He is accompanied by his brother and best man, Prince William, who is also wearing a cavalry uniform.

According to Reuters, Britain’s Prince Harry wore the frock-coat uniform of the Blues and Royals for his wedding to American actress Meghan Markle on Saturday, Kensington Palace said.

The 33-year-old grandson of Queen Elizabeth waved to well-wishers as he arrived at St George’s Chapel in Windsor in the dark blue uniform with his brother and best man, Prince William, who was dressed the same.

“Her Majesty The Queen gave her permission for Prince Harry to get married in his uniform,” according to a statement tweeted by Kensington Palace. “Both uniforms were tailored at Dege & Skinner on Savile Row.”

1:36pm Meghan Markle is seen with her mother Doria Ragland inside the limousine heading to the chapel 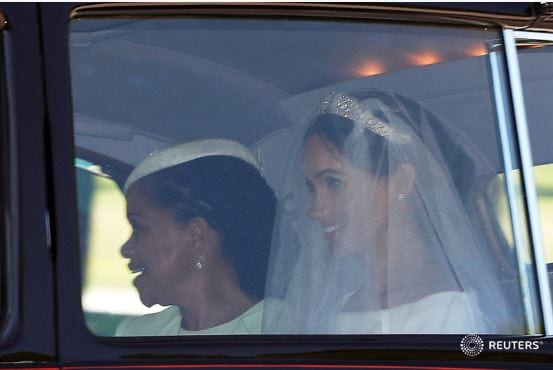 1:25pm The royal family is starting to arrive

As Meghan Markle makes her way to Windsor, members of the royal family have started to arrive at the chapel.

They are followed closely behind by Harry’s uncles, Princes Andrew and Edward, and his aunt, Princess Anne.

1:22pm Meghan Markle is on her way to the chapel

Meghan Markle has departed Cliveden House Hotel in Taplow — where she spent her final night as a single woman with her mother, Doria Ragland.

The pair are driving in a Rolls Royce, with the journey expected to take around 25 minutes. 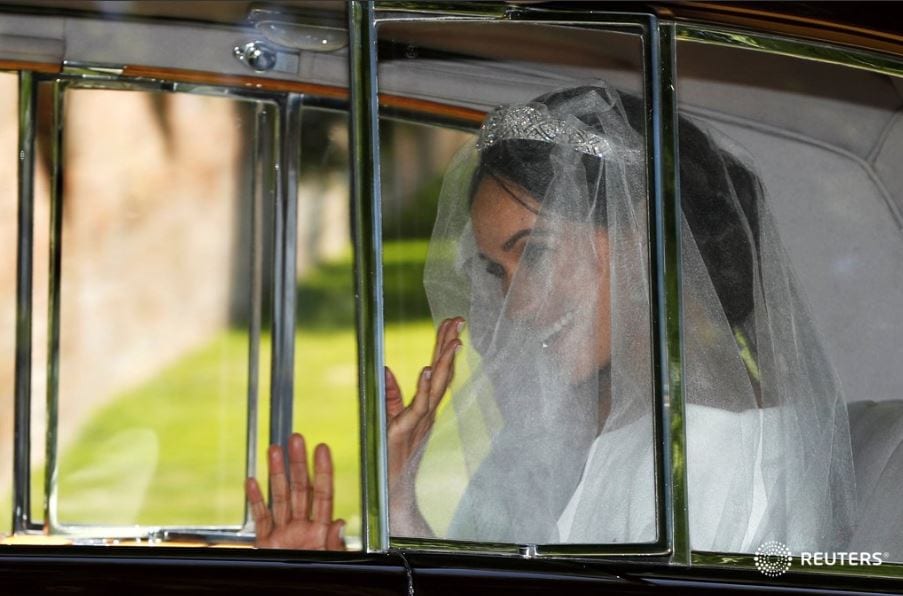 1:20pm Priyanka Chopra is walking to the chapel

Indian actress and winner of Miss World 2000, Priyanka Chopra, is arriving at the chapel wearing a gray Vivienne Westwood dress and, like Oprah, a Philip Treacy hat.

White roses – the favourite flowers of Prince Harry’s late mother Diana – arched over the organ loft and West Door of St George’s chapel, where he will marry American actress Meghan Markle on Saturday.

Appearing to make a somewhat sneaky entrance, Elton John is inside St. George’s Chapel with husband David Furnish talking to the Beckhams and James Blunt.

He’s wearing his trademark round sunglasses with a morning suit and blue tie. 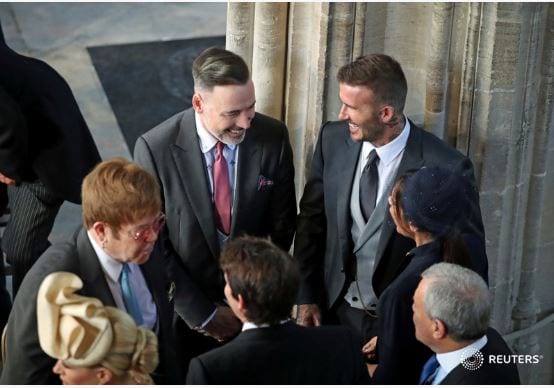 12:47pm Serena Williams tweets pictures of her outift for the wedding.

Carole Middleton, mother of Catherine, Duchess of Cambridge, arrives at St George’s Chapel at Windsor Castle for the wedding of Meghan Markle and Prince Harry. 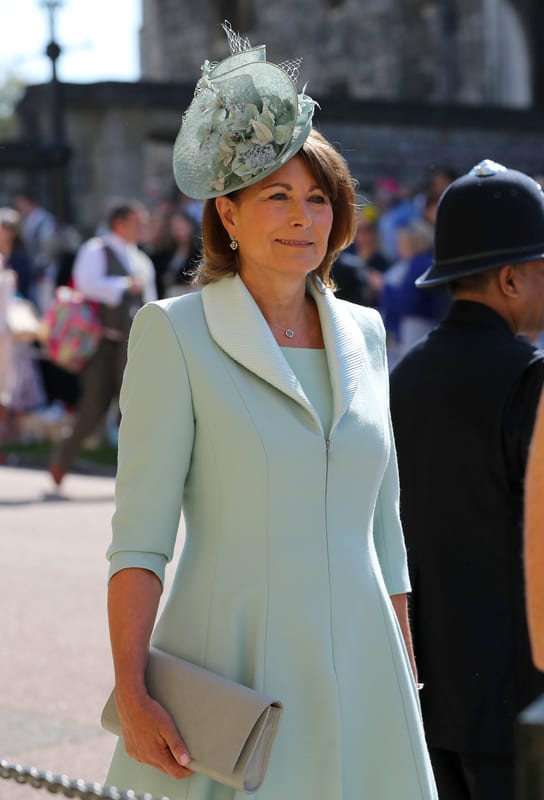 The service sheet for the wedding of Britain’s Prince Harry to Meghan Markle is shown ahead of the ceremony in Windsor.

Some restaurants have come up with a royal wedding menu 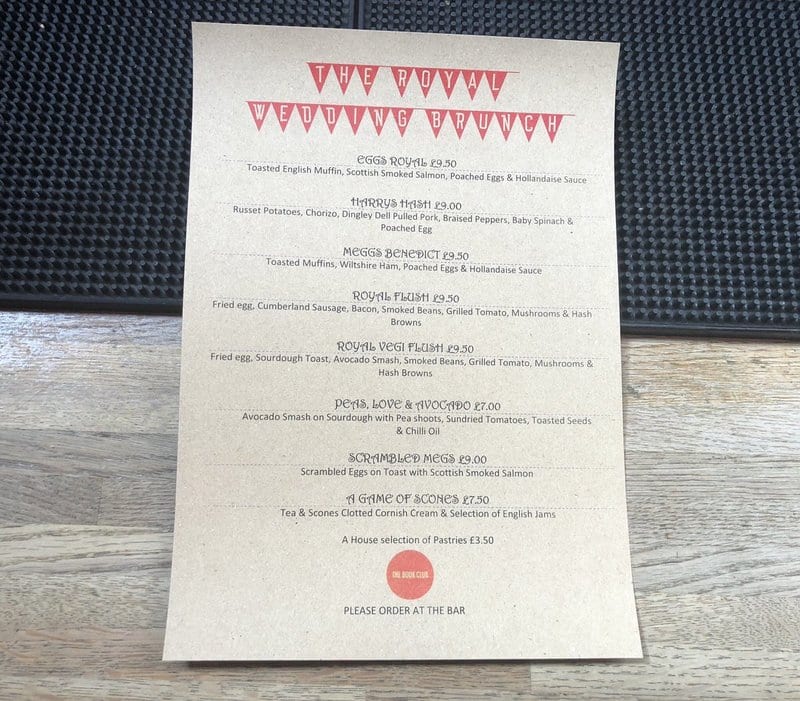 “Meggs Benedict and scrambled megs on the #RoyalWedding menu here at @TheBookClubEC2 in London,” one Elizabeth Culliford tweeted.

12:33pm The Beckhams are here — and David stopped to hug a fan

Former footballer David Beckham and his fashion designer wife, Victoria Beckham, are arriving at the chapel.

The couple waved as the waiting crowds cheer with David stopping briefly to hug a fan. The girl David Beckham hugged is a Manchester bombing survivor.

Walking behind them is former rugby union player Jonny Wilkinson.

George and Amal Clooney have just arrived at Windsor Castle. Amal is wearing a mustard yellow dress and matching hat, while George is in a gray suit.

British Prime Minister Theresa May — who is not invited to the wedding — tweeted her congratulations to Prince Harry and Meghan Saturday. The couple did not invite political leaders except those personally close to the bride or groom.

My very best wishes to Prince Harry and Meghan Markle on their wedding day. To all of those joining the national celebration with street parties and other events, have a wonderful day. #RoyalWedding

11am: Grounds guests get goodie bags full of cookies and chocolate

Commemorative gift bags are being handed out to the lucky members of public who are celebrating the wedding of Prince Harry and Meghan Markle from inside the grounds of Windsor Castle.

They contain a box of shortbread cookies, a giant chocolate coin, a bottle of water and a magnet. 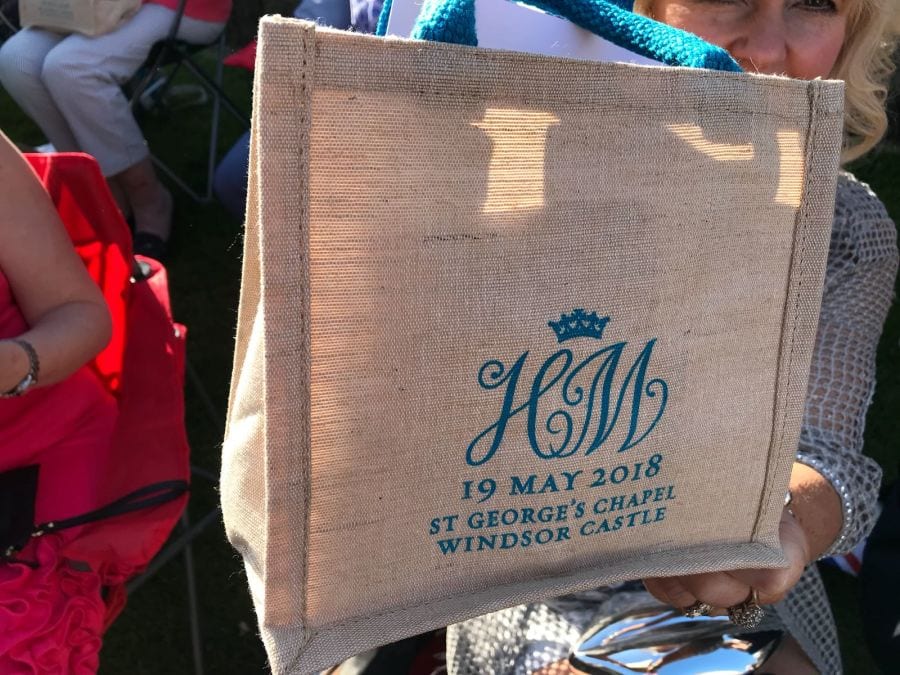