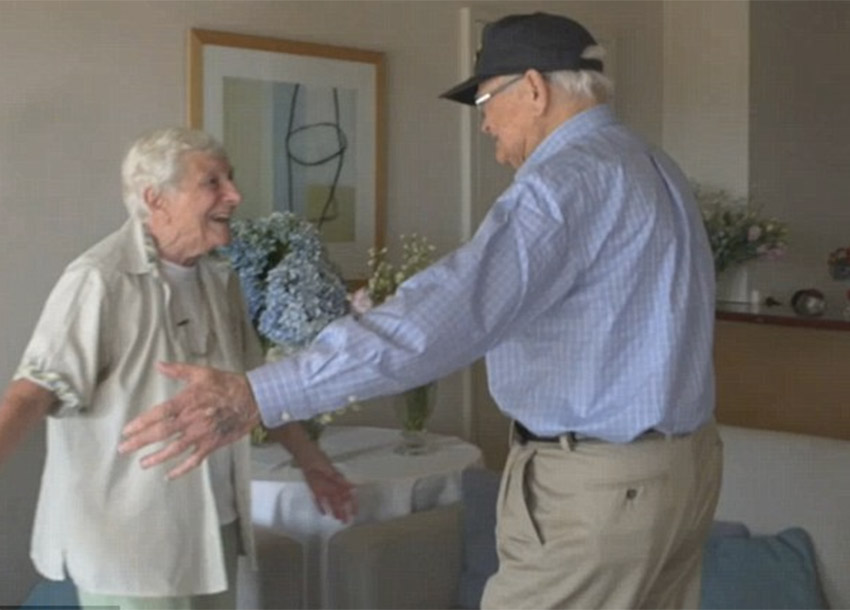 Decades may have passed, but the love between 93 year-old World War II veteran Norwood Thomas and his wartime girlfriend, Joyce Morris, now 88 years-old, was clearly still burning strong when the two lovebirds reunited in Australia on Wednesday (February 10) after 70 years apart.

Thomas flew around the world from Virginia to be reunited with Morris, who now lives in Adelaide, a city in southern Australia.

Upon meeting, the two could not hide their excitement as they hugged and kissed each other.

Morris could be heard saying to Thomas: “we are going to have a wonderful fortnight together.”

The couple then sat together on a sofa and held hands.

“It was a nice feeling to see this woman that I hadn’t seen in 70 years. Of course, there was a great difference in appearance but there’s a big difference in my appearance too so it was a wonderful experience,” said Thomas, after the reunion.

Thomas was just 21 when he met the 17 year-old Morris on the banks of the river Thames in London.

“This friend and I were walking across a bridge at Richmond across the Thames river and we looked down below and saw these two young ladies that were talking to a man about renting a row boat so we decided we’d go down and say hello. We did, and after asking these ladies what they were doing, they said they were renting a boat to take it and get some exercise. So we suggested that we rent two boats and one of the ladies would row my friend and the other would row me and that way they could both get exercise,” recalled Thomas.

When the war ended, Thomas returned to the U.S. He asked Morris to relocate to the United States to marry him but it was not meant to be.

The two ended up marrying other people – Thomas’ wife died in 2001 and Morris is divorced. Both have children.

The reunion happened after one of Morris’ children found Thomas mentioned in an article online and reached out to the publication to make contact with him.

Thomas and Morris then connected via Skype and once the public got wind of the story, they sent in donations to help fund a trip for the two to be reunited. Air New Zealand also offered Thomas a free flight to Australia.