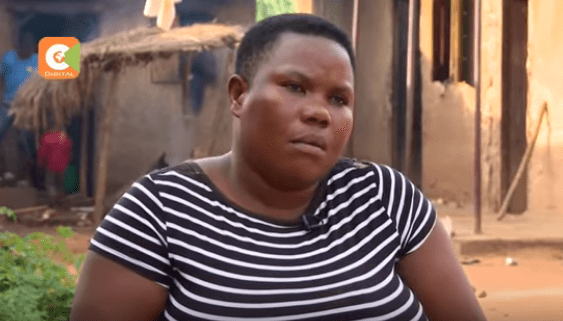 Mariam Nabatanzi is a Ugandan woman, a mother of 38 children having lost six of them.

She got married off when she was just a year shy of teenage-hood, to a man 28 years older than her.

“I take care of my children by myself. Others have asked me to give birth for them but I cannot do that,” she told Citizen TV‘s Saida Swaleh during a recent interview at her home.

She recalls how distraught she was when she was married off to a man 28 years older than her.

Mariam says she had no idea she was going to be married. She only realised what had happened after she escorted a relative but ended up being given off to the man. This was in 1993.

She gave birth to her first children when she was 13: a set of twins.

The Ugandan woman however currently lives alone with her children in Kabimbiri village, Mukono District in central Uganda.

According to her, the man disappeared after becoming violent and marrying other wives.

During a past interview with Daily Monitor, Mariam narrated how her husband humiliated and tortured her during their 25 years of marriage.

“….he beats to the pulp when I try to reason with him over any issue, especially when he gets home drunk….the children hardly know who he is since he is an absent father who gives his children names over the phone and not physically,” she said.

She gave birth to all of them through vaginal birth except the last born who was delivered via Caesarean Section.

Ugandan media first carried her story in 2017 when she was listed among women who have had the most children.

They referred to her as the most fertile Ugandan woman. However, Mariam Nabatanzi says she tried using different contraceptives but they failed her.

“I even visited several doctors to ask them to help me because I felt my fertility would kill me but they were unable to intervene,” she told South Africa’s Citizen newspaper.

On the top of the list is a woman only identified as Mrs. Vassilyev, a peasant woman from Russia who gave birth to 69 children.

According to the BBC, Mrs. Vassilyev–whose first name was never recorded–“popped out 16 pairs of twins, seven sets of triplets and four sets of quadruplets in over 27 separate labours.”

This means that she was pregnant for 18 out of her 40 years.