Men suing women who accused them of sexual misconduct. Will it stop others from speaking out? 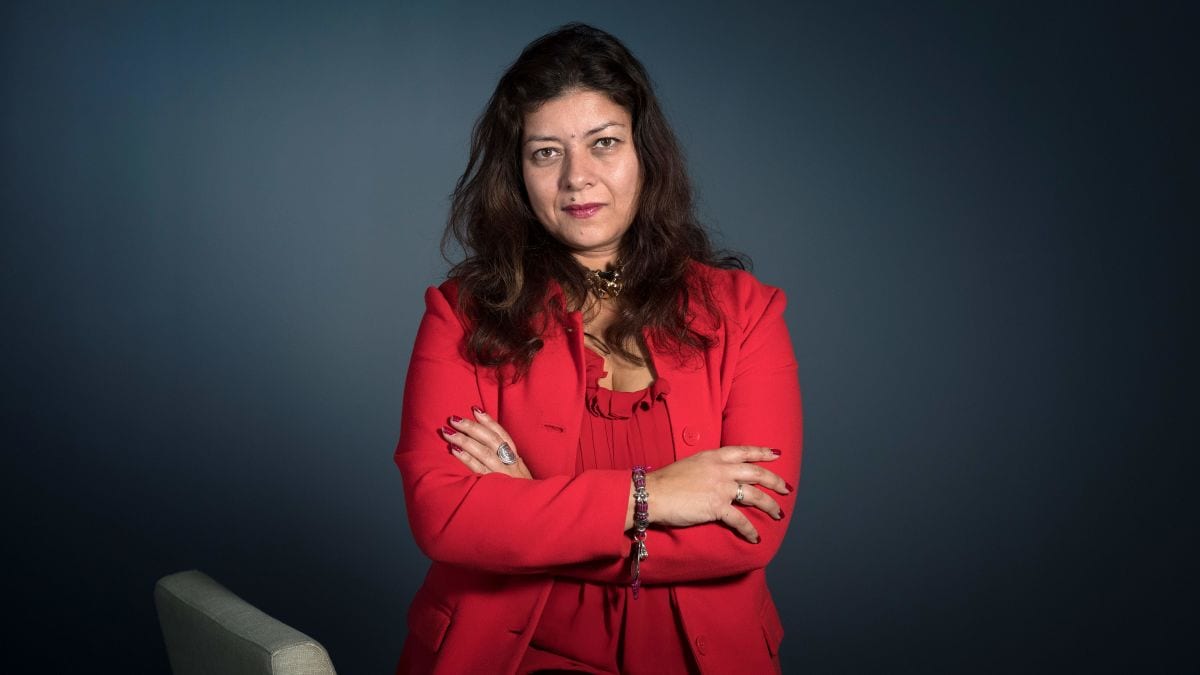 A series of high-profile defamation cases have been brought against women in response to the outpouring of sexual misconduct allegations in the wake of #MeToo, and women’s rights activists say they could have a chilling effect on the movement’s future.

Last week, Sandra Muller, the woman who started France’s version of #MeToo, appeared in a Paris court, where she faced a defamation lawsuit brought by the man she accused of making lewd comments about her.

In October 2017, just days before the #MeToo hashtag went viral in the wake of allegations made against disgraced film producer Harvey Weinstein, Muller, a French journalist, shared her own story on Twitter using the hashtag #balancetonporc, which roughly translates to “squeal on your pig.”

Muller alleged that Eric Brion, a senior French television producer, had humiliated her by saying: “You have big breasts. You are my type of woman. I will make you orgasm all night.”

Her story soon inspired thousands of others to share their experiences of sexual harassment and assault, catapulting France’s national discourse on sexualized violence into the global spotlight.

In a public apology published by the French daily Le Monde in December 2017, Brion admitted he had made those comments to Muller, saying that he had made “inappropriate remarks” to her, “very late at night, during a drink-fueled cocktail party evening, but I did it only once.”

In court last Wednesday, Brion once again admitted that he had said those words to Muller, adding that he had sent her an “apology text message” but didn’t get an answer the following day. He added that, “Muller’s violence against me has never stopped. The violence of people hiding behind their phones.”

While he has said that he regretted his words, Brion noted in Le Monde that he would have rather been tried in a court of justice than in the court of social media.

And that’s exactly what he’s done.

While Brion admitted he had made “inappropriate” comments to Muller, his lawyer Marie Burguburu told CNN the reason they filed a defamation suit was because Muller had accused him of “sexual harassment at work” on Twitter.

“This is defamatory because we can’t blame a man for making himself guilty of an offense when that’s absolutely not the case,” Burguburu said.

Muller, who had recently been honored as a “silence breaker” and person of the year by Time magazine, said at the time that she was surprised by Brion’s change of strategy.

Writing on her Facebook page, Muller said: “The #balancetonporc movement has inspired victims to speak out, and has shed light on a real social problem that is still such a taboo.”

“With this summons, however, they want to force me to shut up.”

Vowing to “fight this until the end,” Muller said that she hoped that the “trial will be an opportunity to hold a real debate on the ways to combat sexual harassment.”

But Celine Piques, spokesperson for the French feminist association Osez Le Féminisme, (Dare Feminism) told CNN that the trial is “absurd,” and one that amplifies a culture in which the courts are “trying to make us believe there is a grey zone between harassment and seduction.”

Women already face immense challenges in speaking out against sexual harassment and gender-based violence for several reasons, Piques added, including the fear of losing their job or other forms of retaliation.

The threat of defamation only compounds that fear.

France’s judicial system already doesn’t “respond to the testimonies of women,” Piques said, adding that even in the wake of #MeToo, only a fraction of women who have been raped brought their case to police.

The latest available figures from the French Ministry of Social Affairs, Health and Women’s Rights show an average of 84,000 women become victims of rape or attempts of rape every year. Less than 40% of estimated sexual violence cases were registered with police from November 2014 to October 2015, with only 771 people convicted the crime in 2014.

“Women are asked how they were dressed before the accused gets asked any questions,” she said, explaining that critics of the feminist movement are dangerously conflating sexual assault and rape with the French “tradition of flirting, of seduction.”

“Justice is sexist, in the image of society,” Piques added. She attributes backlash against the #MeToo movement to men who are “not ready to give up their privileges” in society.

Bastide also said that economic factors play a role in assault cases, with women from working class or poorer backgrounds less likely to report their abuser because they can be sued.

“Fortunately, there are spaces where you can express yourself, but it is extremely paradoxical. Twitter is a wonderful tool but it is also the most violent tool that can turn against us,” Bastide said.

Brion, however, seems to believe he is a casualty of the #MeToo movement, saying in court last Wednesday that he is “the victim of a precision strike” by Muller.

In suing her for defamation, Brion joins a growing list of wealthy men in powerful positions who have taken legal action against their accusers.

The Australian newspaper reported that Rush had inappropriately touched his “King Lear” co-star Eryn Jean Norvill on her breasts and back, followed her into a bathroom and sent her an inappropriate text message during the show’s production in Sydney between 2015 and 2016. Rush denied all the accusations.

Norvill had made the allegations in a private workplace complaint, but later agreed to testify for the paper. She continues to maintain that her claims are true.

In a series of interviews with Australia’s ABC News and The New York Times, actress Yael Stone — who also accused Rush of sexually inappropriate text messages, exposing himself to her and attempting to watch her shower — told ABC News last year that she waited years to come forward with the allegations due to fears that publicly accusing a major star could ruin her career. Rush has also denied all those accusations.

Stone added that Australia’s defamation laws deterred her from coming forward, as laws in Australia place the burden on publishers to prove allegations are true.

Defamation law varies from country to country. In countries like Australia, France and the UK, the burden of proof lies entirely upon the defendant, whereas in the United States, when the plaintiff is a public figure, they must prove that the defendant’s statements are untrue and made with intentional malice.

And while defamation suits are often taken to civil court, where accusers can face fines, in countries with criminal-defamation statues, defendants can also face jail time.

In India, defamation lawsuits can be filed in civil or criminal court. If a defamation case is lodged in the criminal court, defendants found guilty of libel can face prison sentences for a term of up to two years — an outcome that adds an additional layer for victims coming forward.

MJ Akbar, a former junior minister in Prime Minister Narendra Modi’s government and a former influential newspaper editor, has been accused by at least a dozen women of groping, assault and harassment. He has denied the allegations.

Facing allegations of sexual assault and harassment from former female colleagues, Akbar said in October that he had decided to resign and challenge what he labeled “false accusations.” “Since I have decided to seek justice in a court of law in my personal capacity, I deem it appropriate to step down from office and challenge false accusations levied against me, also in a personal capacity,” he said.

Akbar sued journalist Priya Ramani — who had made the first allegation against him — last October, calling the allegations “false and fabricated.”

In another case that month, Bollywood star Alok Nath filed a defamation suit and gag order against writer and producer Vinta Nanda, who alleged that Nath raped her in the 1990s. In a chilling Facebook post, Nanda said she remembers “being violated endlessly” by him after they finished working together on a daytime soap opera. Nath has denied the allegations.

“I have waited for this moment to come for 19 years. I shout out to each one of you who have suffered at the hands of predators to come out and say it aloud,” Nanda wrote in her post.

Nath’s request for a gag order was dismissed by a judge, however, and both defamation trials are ongoing.

In the United States — where the burden of proof lies with the plaintiff — at least 24 states have defamation laws with criminal-defamation statutes.

Sharyn Tejani, director of the Time’s Up Legal Defense Fund, an organization set up in response to #MeToo to defray legal costs for people who have experienced sexual harassment or related retaliation in the workplace, said that in the year and a half that they’ve been operating, they’ve received some 5,000 requests for assistance. Two-thirds of requests come from low-income workers, who are often concerned about becoming a target for retaliation.

She explains that while retaliatory measures, such as having shifts cut or being disciplined or suddenly fired, are commonplace, defamation is also a concern now.

Tejani, who has been working in the field for 20 years, said that the organization has been surprised to see how many people have come to them for help in defamation cases.

“It’s a higher number than we expected, and certainly something that is concerning for people who want to come forward.”

And for victims of sexual and domestic abuse, the threat of defamation can deter victims from speaking out altogether, according to Harriet Wistrich, director of the UK’s Centre for Women’s Justice.

She points to a current case involving a musician who has threatened to sue a group of women who all started sharing their stories on social media.

“Obviously the point of them sharing their stories is wanting to share their story,” Wistrich said, noting that often this is the way that serial abusers are identified, “but the women weren’t aware of it (defamation law) before they were threatened, and now they are facing consequences of that.”

“Once you are threatened, you are advised to shut up because it would exacerbate the problem for yourself. So it is hugely chilling.”

Speaking in French court last Wednesday, Muller’s lawyer Francis Szpiner said that “If this hashtag worked, it’s because hundreds of women have had enough and recognized themselves in this tweet.”

“Balancetonporc is not a movement that opposes men and women, it helps everyone,” Muller added. The verdict in the case is expected on September 25.

Dutch actress Sand Van Roy, who accused French film director Luc Besson of drugging and raping her at a hotel and of repeated violent sexual relations,had come to the court to support Muller.

In February, the French prosecutor’s office dropped her case, saying there was not enough evidence to support the charge. Besson denied the allegations. In a statement to CNN, Luc Besson’s lawyer Thierry Marembert said Besson “regrets that some people prematurely condemned him and thanks others for their consistent support that helped him to face these complicated months.”

Van Roy told CNN she believes there is a “culture of rape everywhere…that is nourished by culture, parents, school — one is conditioned to judge women.”

Women are afraid to speak out, she said, because they know that “they can lose everything, as I did.”

“But we’re stronger than this and we’re going to keep fighting,” she added.