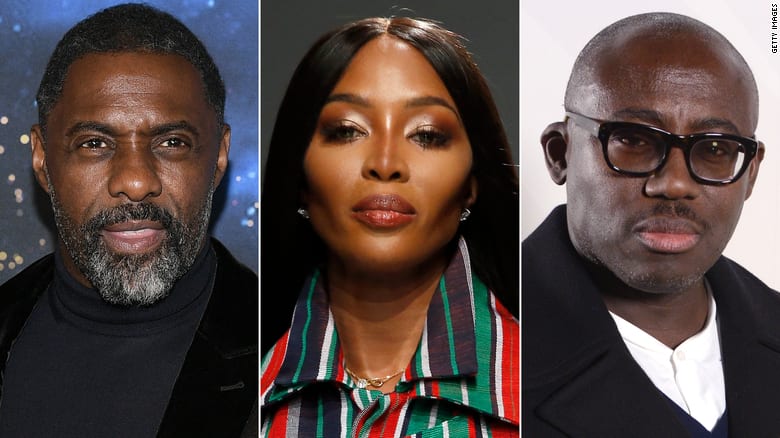 Actors Idris Elba and Michaela Coel, and supermodel Naomi Campbell joined forces with other influential names in fashion, film and media to express their solidarity with the LGBTQ “family” in an open letter tagged #GhanaSupportsEquality on Monday.

It comes after the recently-opened community center in Accra, named ‘LGBT+ Rights Ghana,’ was raided. Head of the center, Alex Kofi Donkor, told CNN last Thursday that he was concerned for his safety.

“To our Ghanaian LGBTQIA+ family: We see you and we hear you. We are in awe of your strength, your bravery and your audacity to be true to who you are even when it is dangerous to do so,” the letter reads.

“You are loved, you are important and you deserve a safe place to gather in your shared experience.”

Referencing the raid at the center, the celebrities said they had watched events unfold in recent weeks with “profound concern.”

“It is unacceptable to us that you feel unsafe,” the letter added.

The celebrities, who vowed to stay abreast of developments concerning the LGBTQ community in Ghana, also promised to protect them using their shared power and influence.

“Neither the raid on February 24, nor any other acts of intimidation have the power to break your indomitable spirits. It only emboldens all of us to act with more urgency and intention,” the letter continued.

They then called on Akufo-Addo, as well as political and cultural leaders, to “engage in a meaningful and purposeful dialogue” with the community so as to “create a pathway for allyship, protection and support.”

A spokeswoman for Ghana Police Service (GPS), told CNN on Saturday that the opening of the center was at variance with the country’s gay laws and prevalent opinions on homosexual activities in Ghana.

“To the extent that Ghana law criminalize certain actions promoted by LGBTQI+, and the Ghanaian society largely abhors same, no-one expects any individual or group to set up such an office or center,” Superintendent Sheilla Abayie-Buckman, the GPS Director of Public Affairs, said.

Abayie-Buckman said security forces stormed the leased not-for-profit center following a complaint by the property owner, who feared that his building “was under threat of being burnt for alleged illegal purposes.”

“Our search showed that it was being used for or in relation to the business of LGBTQ. With no person in the house, it was locked up for the occupants to report to the police to answer questions,” she added.

Abayie-Buckman told CNN that no arrests have been made in connection to the police’s findings. “Nobody has also owned up yet. The place is under the watch of the police,” she said.

Responding to whether the occupants of the LGBTQ center will be arrested if they showed up for questioning, the police spokeswoman said: “It depends on what the investigation would have established.”

In a statement sent to CNN Monday, the LGBT+ Rights Ghana group said: “We are law abiding citizens of Ghana who have not committed any illegalities. Thus, once our safety is guaranteed, we are willing to honor the invitation of the police for questioning.”

The group said the center was established to support the vulnerable LGBTQ community in Ghana, which has endured years of discrimination and persecution.

“On January 31st, we opened a safe space to support Ghanaian LGBTQI+ persons who are abused, discriminated against, or neglected by their families,” the statement said. “Soon after this, we received threats and attacks from various quarters.”

“Traditional leaders in Kwabenya, the area our office is situated in, threatened to burn down the office,” it added. The group said that none of the persons who made those threats were arrested by the police.

“Instead, on February 24, police officials, a representative of our landlord, traditional leaders, and some other persons entered our office without our consent. Sensing imminent danger, Alex Kofi Donkor, our Executive Director left the premises for a safe house.”

US President Joe Biden has sought to decriminalize LGBTQI+ status overseas. In a memo issued on February 4, Biden threatened wide-ranging sanctions against countries where gay rights are suppressed.

The Ghanaian government, however, insists that the country’s laws are supreme, and legislation criminalizing gay sexual activities would remain in place.