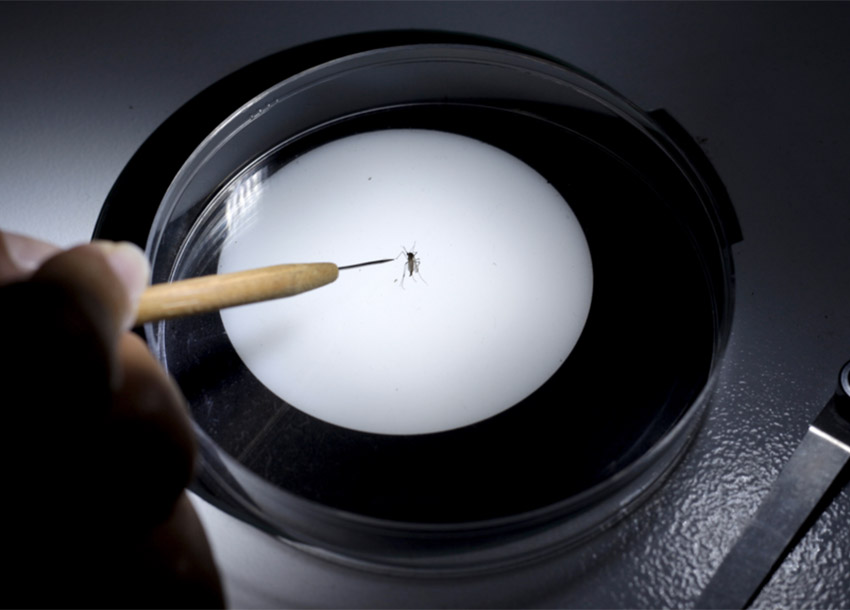 President Barack Obama on Tuesday called for the rapid development of tests, vaccines and treatments to fight the mosquito-transmitted Zika virus, which has been linked to birth defects and could spread to the United States in warmer months.

U.S. health officials are stepping up efforts to study the link between Zika virus infections and birth defects, citing a recent study estimating the virus could reach regions where 60 percent of the U.S. population lives.

Obama was briefed on the potential spread of the virus by his top health and national security officials on Tuesday.

“The president emphasized the need to accelerate research efforts to make available better diagnostic tests, to develop vaccines and therapeutics, and to ensure that all Americans have information about the Zika virus and steps they can take to better protect themselves from infection,” the White House said in a statement.

The virus has been linked to brain damage in thousands of babies in Brazil. There is no vaccine or treatment for Zika, a close cousin of dengue and chikungunya, which causes mild fever and rash. An estimated 80 percent of people infected have no symptoms, making it difficult for pregnant women to know whether they have been infected.

On Monday, the World Health Organization predicted the virus would spread to all countries across the Americas except for Canada and Chile.

In a blog post, National Institutes of Health Director Dr. Francis Collins cited a Lancet study published Jan. 14 in which researchers predicted the Zika virus could be spread in areas along the East and West Coasts of the United States and much of the Midwest during warmer months, where about 200 million people live.

The study also showed that 22.7 million more people live in humid parts of the country where mosquitoes carrying the virus could live year round.

Given the threat, Collins said “it is now critically important to confirm, through careful epidemiological and animal studies, whether or not a causal link exists between Zika virus infections in pregnant women and microcephaly in their newborn babies.” Microcephaly results in babies being born with abnormally small heads.

There is still much to learn about Zika infections, experts said. For example, it is not clear how common Zika infections are in pregnant women, or when during a pregnancy a woman is most at risk of transmitting the virus to her fetus.

Collins said the National Institute of Allergy and Infectious Disease is conducting studies to more fully understand the effects of Zika in humans, and to develop better diagnostic tests to quickly determine if someone has been infected. The NIAID is also working on testing new drugs that might be effective against the virus.

The U.S. Centers for Disease Control and Prevention also announced new instructions for pediatricians treating infants whose mothers may have been exposed to the virus during pregnancy.

In those guidelines, the CDC made clear that it considers the Zika virus a nationally notifiable condition, and instructs doctors to contact their state or territorial health departments to facilitate testing of potentially infected infants.

Dr. Kathryn Edwards of Vanderbilt University, who serves on the American Academy of Pediatrics’ committee on infectious disease, said the guidelines were intended to help establish whether Zika causes microcephaly and to help pregnant women who may have been infected with the virus.

Microcephaly is a lifelong condition with no known cure, the CDC website said. Symptoms range from mild to severe.

In mild cases, infants often have no symptoms other than small head size, but doctors still need to check their development regularly. In severe cases, babies may need speech, occupational and physical therapy.

The guidelines for testing infants affected by Zika infections follows CDC guidelines for caring for pregnant women exposed to Zika virus, which were first reported by Reuters. The CDC said last week it is trying to determine how many pregnant women may have traveled to affected regions in the past several months.

On Tuesday, the CDC added the U.S. Virgin Islands and the Dominican Republic to its list of countries and territories with Zika transmissions, bringing the total to 24.

There are no global estimates for how many people in the world have been infected by the Zika virus, World Health Organization spokesman Christian Lindmeier said on Tuesday.

He said that because Zika has such mild symptoms, the virus has “not really been on the radar.”

Lindmeier said it was not yet clear whether the virus affecting Brazil and other countries in Latin America and the Caribbean was a mutated version of the virus that has caused prior outbreaks.

He said the WHO was working with the CDC, the Institut Pasteur in France and the London School of Hygiene and Tropical Medicine to establish that.

“There is a lot of effort going into this now, on the ground, in the laboratories, everywhere,” Lindmeier said.