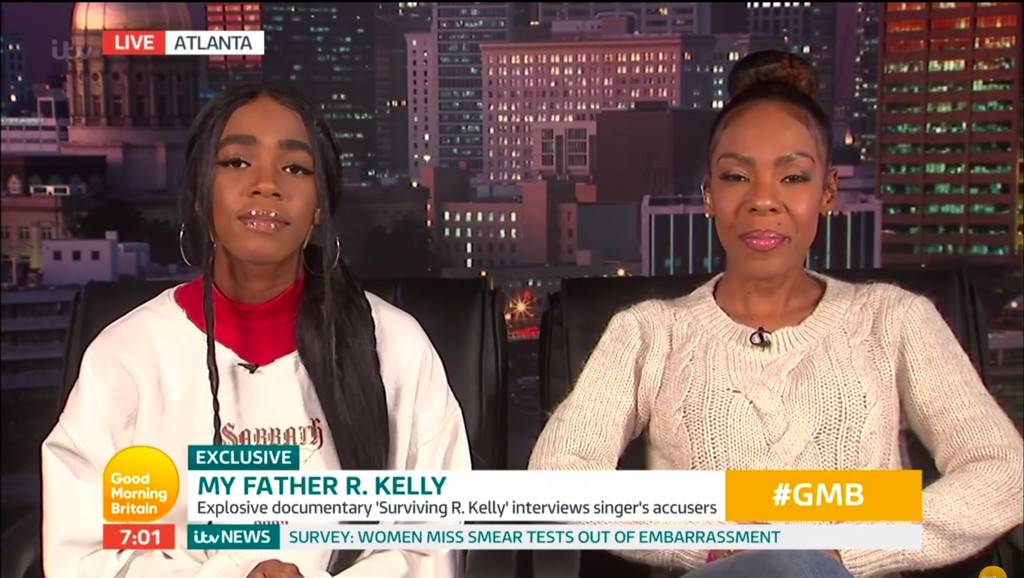 But the accusations of abuse, manipulation and inappropriate encounters with girls and young women have been around — and vehemently denied — by Kelly for decades.

Kelly’s debut album “Born into the 90’s” is released a year after he signs a deal with Jive Records. It features his group Public Announcement and includes hit singles “Honey Love,” “Slow Dance (Hey Mr. DJ)” and “She’s Got That Vibe.” Fans will later note that one of the lyrics on the latter says, “Little cute Aaliyah’s got it.”

Kelly releases his solo album “12 Play.” Songs like “Bump n’ Grind” and “Your Body’s Callin'” firmly cement his image as an artist specializing in sexual lyrics.

The 27-year-old singer reportedly marries his 15-year-old protege, Aaliyah Haughton. Kelly is the lead songwriter and producer on her debut album, “Age Ain’t Nothing But a Number.”

Vibe magazine later publishes a copy of what they report is the couple’s marriage license, listing Haughton’s age as 18.

Haughton is killed in a plane crash in August 2001.

Tiffany Hawkins files suit against Kelly, as well as his record, publishing and management companies, claiming personal injuries and emotional damage arising from an alleged sexual relationship with Kelly, which she says began when she was 15 and ended when she was 18.

That case is reportedly settled out of court.

Around the same time, his gospel tinged single “I Believe I Can Fly” is included in the film “Space Jam,” starring Michael Jordan. The song becomes one of the singer’s biggest hits.

Jim Derogatis and Abdon M. Pallasch publish their first report in the Chicago Sun-Times on allegations of Kelly having sexual relationships with girls as young as 15.

The article outlines the Hawkins suit, as well as Kelly’s marriage to Haughton.

According to the story, Chicago police had twice investigated allegations that Kelly was having sex with an underage girl but dropped the investigations because the girl would not cooperate.

Derogatis anonymously receives a video tape that appears to show Kelly having sex with a young woman, he later reports in the Sun-Times.

Out of concern that the person on the tape may be underage, it is turned over to Chicago police.

Tracy Sampson, an aspiring rapper and former intern at Epic Records, files a lawsuit against Kelly claiming that he initiated a sexual relationship with her when she was 17.

The case is settled out of court for an undisclosed sum.

The Chicago Sun-Times reports Kelly is being investigated by police after another sex tape is sent anonymously.

“The girl in the video, now 17, was identified by her aunt, who said that her niece would have been 14 at the time the tape was made, based on her appearance,” the paper reported. “Kelly can also be heard on the tape referring to the girl by her first name.”

“It’s not true. All I know is this: I have a few people in the past that I’ve fired… people that I’ve thought were my friends that’s not my friends,” he tells WMAQ-Channel 5 at the time. “It’s crap, and that’s how we’re going to treat it.”

Bootleg copies of the “R. Kelly sex tape” are sold on the streets, according to multiple news reports.

The singer is sued by Patrice Jones, who alleges she was 16 when she began a sexual relationship with Kelly.

She also accuses Kelly of pressuring her into terminating a pregnancy that resulted from their alleged encounters.

The case is settled out of court for an undisclosed sum.

Dancer Montina “Tina” Woods, 33, sues Kelly after she alleges he secretly taped their sexual encounter and the tape was being sold.

Representatives for Kelly call the suit “ridiculous” and “nonsensical.” The case is later settled out of court for an undisclosed sum.

Kelly is indicted on 21 charges related to child pornography resulting from the second anonymously sent videotape of him appearing to have sex with a young girl.

The singer is arrested at his Florida vacation home.

Kelly maintains his innocence and is released on bail.

Kelly’s wife files for an order of protection. The pair later reconcile and she rescinds the order.

After years of delays, jury selection finally begins for the child pornography trial against Kelly, which was reduced to 14 charges.

Kelly is found not guilty on all counts after the jury deliberates for a day.

Kelly and his wife finalize their divorce.

The star’s planned performance at the Fashion Meets Music Festival in Columbus, Ohio is canceled after protests.

“The people of Columbus didn’t feel that R. Kelly’s reputation was reflective of their community, and took to social media to adamantly express their opinions,” the festival’s communications director, Melissa Dickson, says in a statement. “FMMF heard their concerns and took action.”

Kelly storms out of an interview with “HuffPost Live” after the host asks him questions about past allegations of misconduct.

Buzzfeed publishes an explosive article outlining claims that Kelly is holding a group of adult women against their will as part of what some of their parents say is a “cult.”

A group of people cited in the article claim that their daughters, ages 18 to 31, are a part of an entourage of at least six women attached to Kelly.

Timothy and Jonjelyn Savage tell CNN they believe their adult daughter, Joycelyn, is having a sexual relationship with Kelly and she is being manipulated by him into cutting off contact with the outside world.

Joycelyn Savage denies those claims and asks her parents, via a video shared with TMZ, to stop speaking out about her relationship with Kelly.

Oronike Odeleye starts a petition to get Kelly’s music off the airwaves in Atlanta, which catches the eye of activist Kenyette Barnes and the hashtag #MuteRKelly is born.

Jerhonda Johnson Pace, 24, breaks a nondisclosure agreement and tells Buzzfeed she was 15 and a fan when she met the singer in 2008 outside the Chicago courtroom where he was on trial for child pornography charges.

She alleges that she began a sexual relationship with Kelly when she was 16.

Rolling Stone publishes an interview with former Dallas DJ Kitti Jones. She alleges that she was in a relationship with Kelly while in her ’30s that mirrored allegations in the Buzzfeed article.

The Women of Color (WOC) group within the Time’s Up movement calls on the entertainment industry to cut ties with Kelly.

A 20-year-old woman files suit against the singer, claiming he unlawfully gave her alcohol, assaulted her and gave her a sexually transmitted disease.

According to the suit obtained by CNN, Faith Rodgers says she was 19 when she first met the singer.

The singer continues to deny the allegations and releases the song “I Admit” as an answer to his critics.

A New York screening for the docuseries “Surviving R. Kelly ” is evacuated after a threatening phone call is made to the event’s location.

“Surviving R. Kelly” premieres to big ratings and renews calls for Kelly to be investigated.

Kelly’s attorney, Steve Greenberg, tells CNN that his client “has done nothing wrong.”

“Someone with an agenda has done a hit piece,” Greenberg says of the docuseries. “(Kelly’s) out in public. He’s not hiding. There’s no secret compound with sex slaves.”