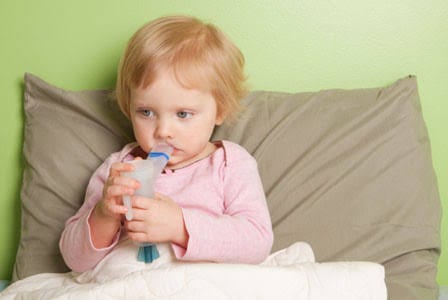 The symptoms of a sick child often become worse at night.

According to CNN, body temperature rises naturally in the evening, so a fever that was slight during the day can easily spike during sleep.

Try a dose of acetaminophen, wait half an hour and if the situation is not getting any better try ibuprofen if the child is above one year.

Any fever above 100.4°F (38°C) in an infant under 3 months and an elevated temperature in any child that is accompanied by lethargy, vomiting, diarrhea, stiff neck, or an unusual rash deserves a call to the doctor.

Some of these allergy triggers for example dust mites are present in a child’s room exposing them to the triggers when they sleep.

“The body’s level of cortisol drops at night, and cortisol has some preventive effects on asthma,” says Santiago Martinez a pediatric allergist and clinical assistant professor of medicine at Florida State University Medical School . The levels of histamine rise triggering many allergies and asthma symptoms.

In case of an allergy attack at night, an antihistamine should put down your child symptoms. If the attacks are frequent or occur year-round, you may want to consider immunotherapy shots, which introduce tiny amounts of the allergen into the body, slowly allowing immunity to build.

If you have an asthmatic patient you may need to stock a bronchodilator, which immediately opens the airways, a peak flow meter to monitor your child’s breathing, and preventive medications such as leukotriene inhibitors or inhaled steroid medications, which work to keep inflammation in check long-term.

Martinez recommends reevaluation of a doctor if the Bronchodilator is not working, if the child has a dry cough or wheezing and if they  more than two flare-ups of asthma a week.

Some of the preventive measures to take is keeping your child’s windows closed, banning Fluffy and Fido from the kid’s room and encasing the bedding with allergy-proof covers.

An earache is more likely to happen  at night because lying down increases the collection of fluid and puts extra pressure on the inflamed area.

Ibuprofen (for kids older than 12 months) or acetaminophen can help relieve the ache. You can also try warming a tablespoon of olive oil for middle ear infections, then put two or three drops of warm oil in the child’s ear.

This relaxes the membrane and bring instant relief. Applying a warm, damp washcloth to your child’s ear also can help.

If your child is prone to these remedies, ask about getting prescription eardrops to numb the pain.

An antihistamine can really help if you have an allergic rash or lots of bites. Topical cortisone cream can also be handy but you have to get instructions from the doctor.

For immediate relief, use saline nose drops or spray. Both will moisten the membranes and loosen the secretions, making it easier for your child to blow out the mucus, or for you to remove it with a bulb syringe if you have a baby.

Saline nose drops or spray moistens the membranes and loosen the secretions. This will be easier for your r for your child to blow out the mucus, or for you to remove it with a bulb syringe if you have a baby.

For immediate relief, use saline nose drops or spray. Both will moisten the membranes and loosen the secretions, making it easier for your child to blow out the mucus, or for you to remove it with a bulb syringe if you have a baby.

You may also be tempted to offer your child a decongestant, but there is no evidence that they work unless you are sure the stuffiness is due to allergies.

You first have to check that you child is not throwing up anything green or bloody or vomiting that is accompanied by pain in the lower right side of the abdomen. If she has any of the two you need to call a doctor.

You then calm the child down and comfort him with a cool, wet washcloth on his forehead and face, then let him go back to sleep, with a plastic bowl or other container by his bed in case he feels sick again.

If he’s still awake an hour later but hasn’t vomited again, try giving him small sips of flat cola or ginger ale, if you have it.

“You can also try opening up a can of pears or peaches and giving the child one tablespoon of the syrup inside every fifteen minutes,” says Philip Itkin, M.D., clinical associate professor of pediatrics at the University of Nebraska Medical College in Omaha.

“It really helps settle the stomach and keeps him hydrated.” An ice pop is a good alternative, too.

“Anytime you think your child’s health may be in serious danger, for instance, he has a high fever and is acting poorly, has trouble breathing, has a strange rash, or is having a seizure, call your doctor immediately. And almost any symptom in a baby under 4 months old merits an immediate call to the doctor, no matter the time.” a CNN report read.