We all know Dubai, a full blown show of decadence. Skyscrapers, million dollar cars, 7 star hotels, sheikhs who spend like money is going out of style and whatever earthly luxury you can image.

But like many, I have always wondered what the old Dubai was like before the towering structures and marvels took over, and more so the native Emirati.

So when I landed in Dubai for the second time this year on the second week of December, I was ready to go back in time.

This time I was determined to find out more about the Emirati folklore, lifestyle and food. In the heart of the old Dubai I got mesmerised by the bustling souks.

Here my senses were treated to rich sounds, sights and scents in the ancient style markets and buildings as I travelled back in time. The coloured spices and herbs, most originating from India, don the streets as the vendors stridently entice the mostly foreign customers who are visibly wowed by the vibrant variety on display. 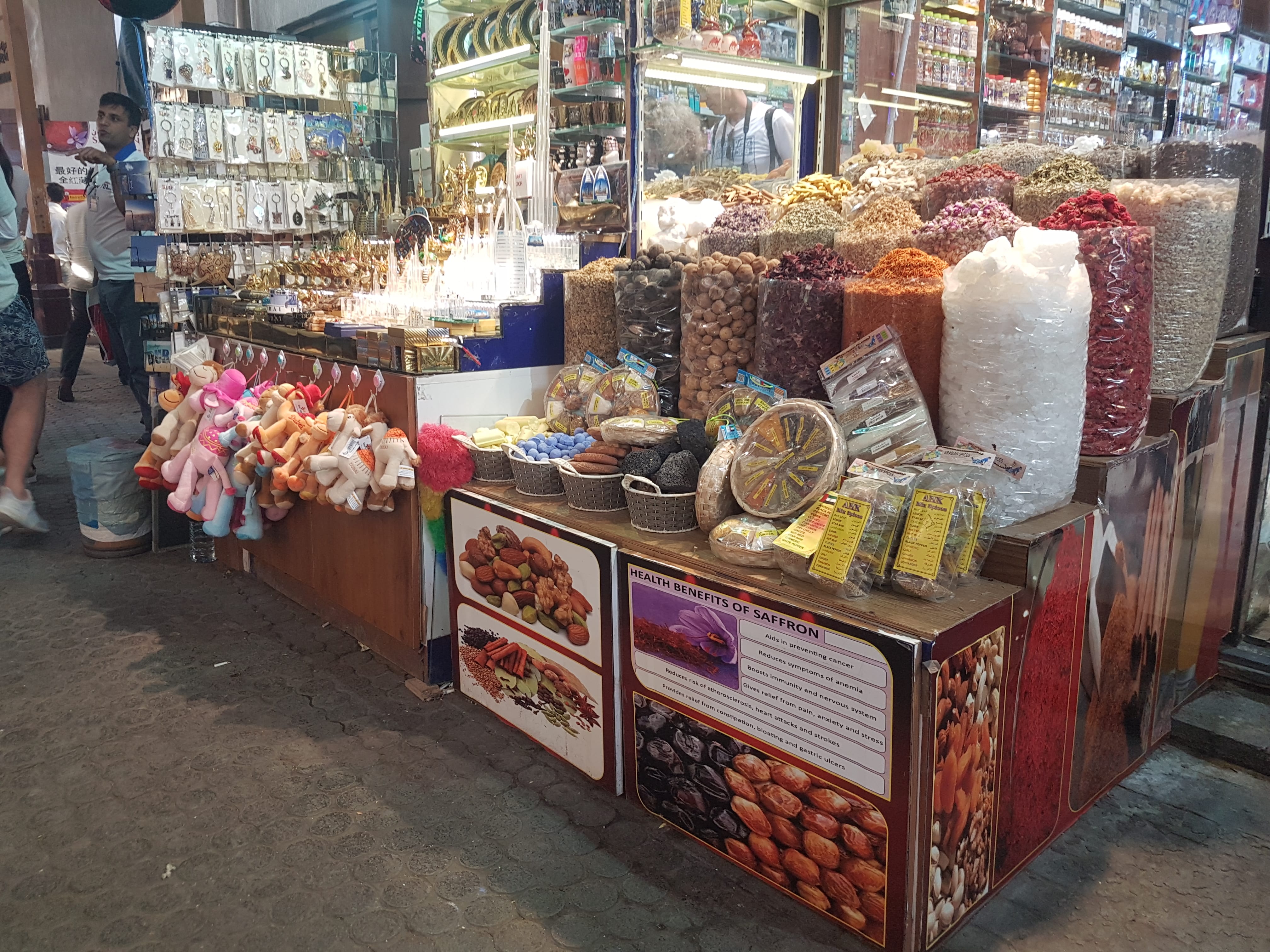 The Perfume Souk… quite an array of scents and brands are on offer here, at more competitive prices compared to the new Dubai, which many visitors consider a rich man’s paradise. If you have a soft spot for sought-after jewels and precious metals you will be hooked to the Gold Souk.

Here we had a chance to see and take pictures of the world’s heaviest gold ring that weighs in at 63.856 kg and is recorded in the Guinness Book of World Records. It is mounted with 5.17 kg of precious stones and set on a 58.686 kg 21 carat gold ring.

The stroll through the spice and gold souks saw me nearly convinced by this amusing guy with a strong Eastern accent that I need the aphrodisiac he was selling.

“Just grind it, mix with water and take 15 minutes before you do the thing. Your woman will be very pleased,” said the amused vendor with a wink as his eyes moved from me to a lady shopper next to me.

The Abra is the city’s most traditional mode of transport and offers a great way to experience the rich history and heritage of the original centre of Dubai’s commerce that still buzzes with boats zipping up and down trading goods. But Dubai’s Textile Souk is filled with brightly colored silks and embroidered fabrics that will leave textile lovers weak in the knees.

A walk of about 20 minutes leads us to Sheikh Mohammed Centre for Cultural Understanding (SMCCU), tucked deep in between towering magnificent structures of old designed in accordance with Emirati tradition.

At the center, presenter Fathayah Younis eloquently shares interesting tit bits about the Emirati culture and comfortably handles queries on any aspect of the Emirati and Islamic culture.

Did you, for example, know that among the Emirati, a stranger can come and stay at your house for a maximum of three days without being questioned and being thrown out? Interesting.

We also learn from Younis that the Emirati are doing all in their power to retain their traditional identity by staying true to their traditional attire that is typical of Arabic countries and is inherited from the Bedouin culture which prevailed in the Arabic peninsula.

Both men and women wear “veils” and long sleeved “robes” to protect them from the scorching sun that dominates their calendar year. The women wear the abaya, a long black robe with a hijab, with some adding a niqab to cover their mouth and nose, only leaving the eyes exposed.

Through the SMCCU presenter we also learn that it is frowned upon, vial openly or on social media, to criticise the Dubai Ruler Shaikh Mohammed bin Rashid Al Maktoum, who is also the vice-president and Premier of the United Arab Emirates. The ruler, we are told, encourages those who have concerns about his leadership or planned projects to seek his audience and raise them for consideration. Mmh. 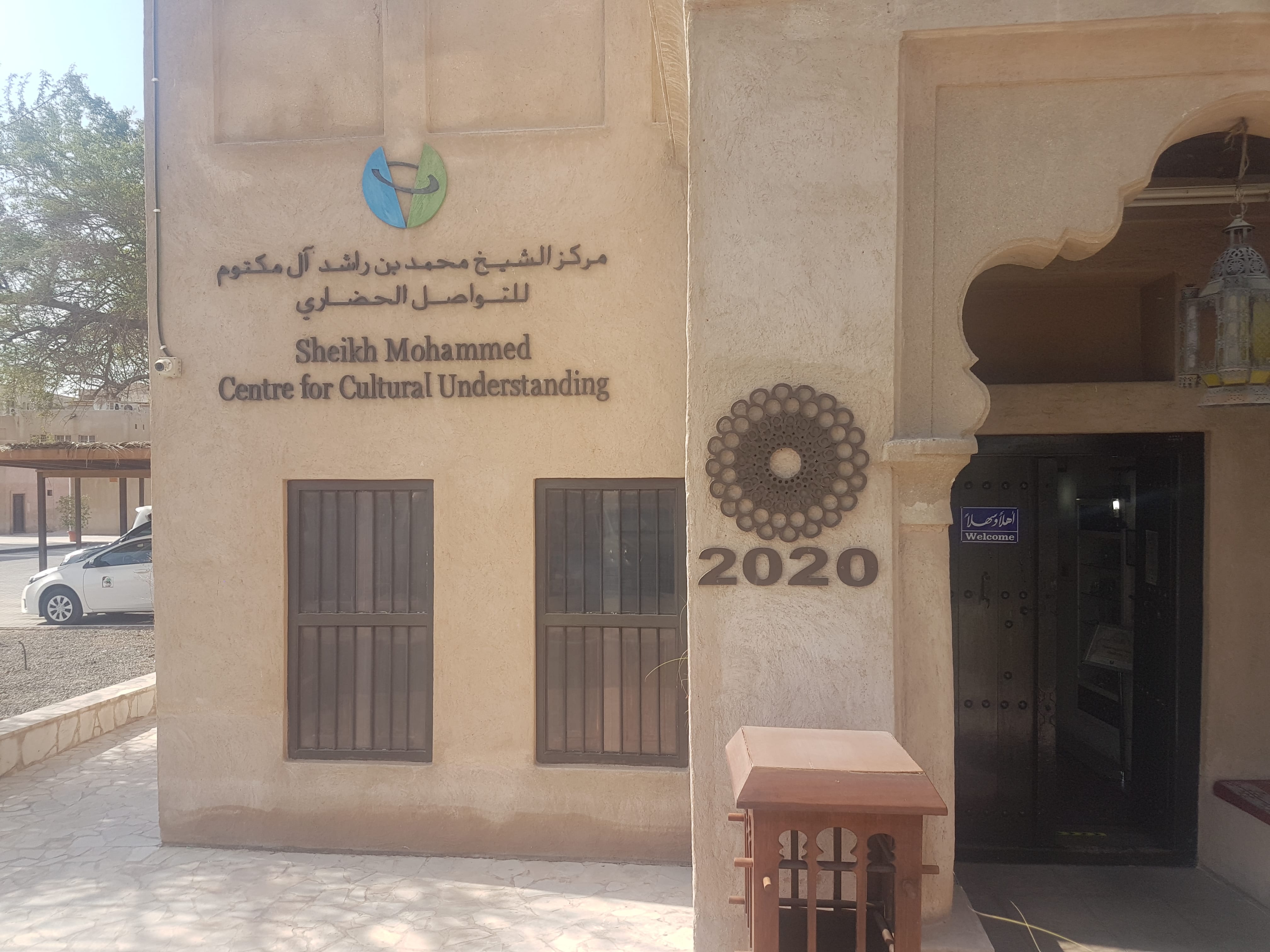 But the best part of the session was the EMIRATI FOOD! You see, it is almost impossible to find a restaurant in the new Dubai that offers Emirati cuisine. You mostly find international tastes on offer, apart from a joint like Al Fanar Restaurant and Café that offers exclusively Emirati food.

At the Sheikh Mohammed Centre for Cultural Understanding only the men serve guests. Endless supply of coffee in small bits is served in a small cup by a man who is not supposed to talk to you (traditional mutes were used) and they are only supposed to observe how you are holding your cup; as long as you are holding the small cup facing up you will get your cup refilled until you shake your cup to show you have had enough. The coffee has a strong flagrant taste of saffron or cardamom.

Our lavish menu as we sat on the traditional setting of classy reddish checked cushions arranged on the floor in a rectangular shape was traditional glistening white rice, chicken salona, vegetable stew, salad and the epic Machboos, a delish dish of aromatic spicy basmati rice cooked in tender meat. I loved it and helped myself to three generous servings! 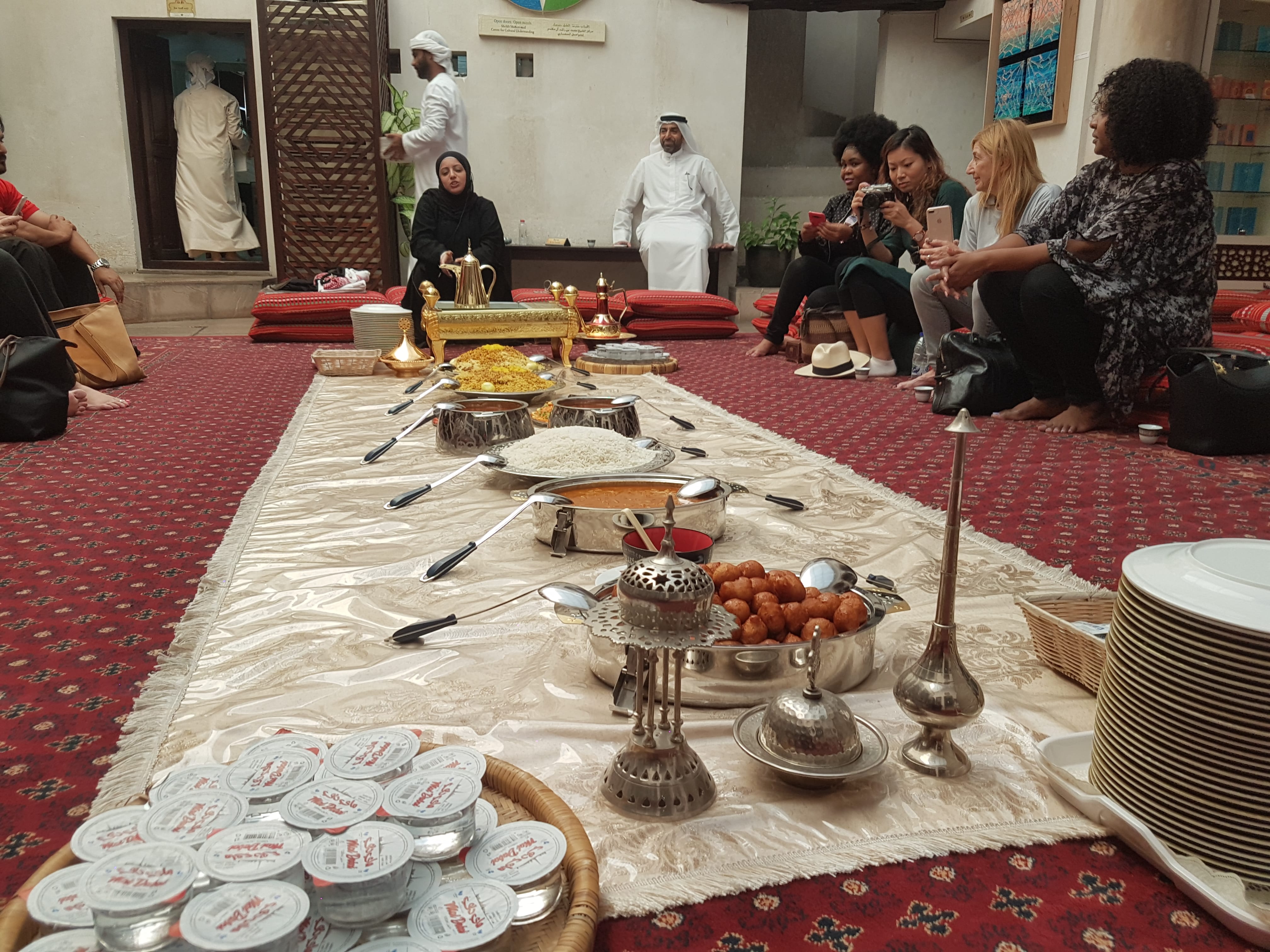 Dessert was Legemat with sprinkles of sesame seeds and date serving. And to crown it all up was a bigger cup of Karak tea, or Kadak as it is popularly known in its Indian origins. The strong aromatic coffee is taken with dates to add some flavor. Younis says such a meal takes around four hours to prepare and is mainly shard with family and friends at home hence the reason it is still uncommon in most restaurants in Dubai.

The better part of the visit to the cultural center is that a visitor can carry whatever amount of the irresistible food they want and plastic containers are availed. I was full, I still carried some more!

As we left for the next destination of the ever amazing Dubai during its winter season, I was left thinking of how tough it must be for the Emirati to retain their culture given they only constitute less than 15% of the Dubai population which is dominated by expatriates from South East Asian countries led by India and Pakistan. South East Asians form 58% of the total population of UAE. Western population shares to around 8% of the overall Population of Emirates which was established in 1971.

I love learning more about other civilisations. I will never forget the EMIRATI!