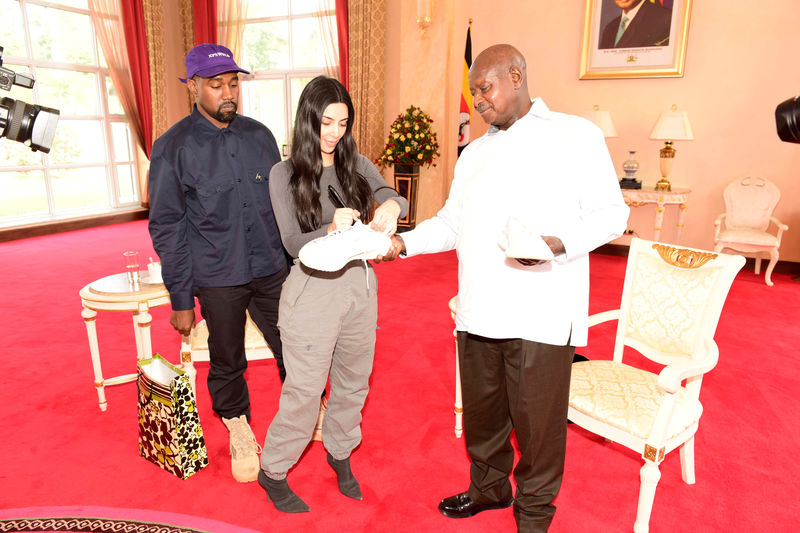 Deadly election-related violence in August caused many tour groups to cancel trips, dealing a blow to the economy. Uganda’s tourism body is hoping the couple’s stay will attract more visitors.

A cartoon in a Ugandan newspaper depicts Kanye West sipping a local beer and thinking “Uganda is gold,” while wife Kim Kardashian, in a red bikini, takes a selfie under the sunset.

Meanwhile, in a reversed Safari, wild African animals compete to get a good look at the celebrity couple.

The sketch underscores the attention West and Kardashian’s visit is bringing to Uganda, where the rapper says he will record a new album.

“So we need to be able to exploit that. If 100,000 people came here because of Kim Kardashian and Kanye West, we would probably expect over $200 million and that would probably create not less than 2,000 jobs in the country. Whatever they are filming right now will stay online for a very long time and it will continue to market Uganda as a key destination.”

Tourism groups canceled planned visits to Uganda after violence erupted in August in relation to a local election.

Clashes broke out between security forces and youth supporters of the musician-turned-politician known as Bobi Wine. Wine, whose real name is Robert Kyagulanyi, was arrested and charged with treason for allegedly throwing rocks at President Yoweri Museveni’s car.

West on Monday met Museveni, who has ruled Uganda for three decades, and gave the president a new pair of white sneakers.

Social media posts made fun of the gift, noting the president is known for wearing odd-looking shoes.

Echoing opposition calls for Museveni to step down, one post read, “We hope that this pair of sneakers can inspire him to sneak out of power.”

It was not clear if West would meet fellow musician Wine, who is trying to get permission from authorities to hold a concert while on bail.

West made headlines last Thursday when he met with U.S. President Donald Trump in the White House Oval Office. The rapper stunned reporters by giving Trump a big hug, pounding the president’s desk, and using profanity.

On the streets of Kampala, not everyone was aware of the celebrity couple’s visit to Uganda, but, Leah Kahunde voiced excitement.