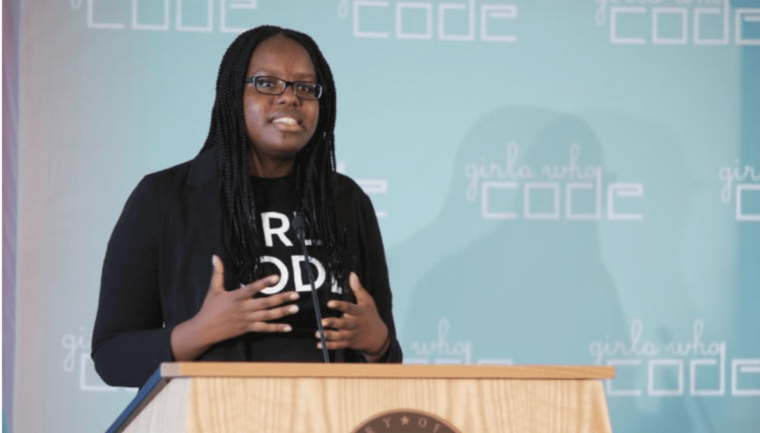 I’m a Black woman starting remote education this fall, and I’m worried about what it means for my future.

My mom was 17 years old and living in Uganda under the dictatorship of Idi Amin when her school was bombed in 1979.

She travelled to the United States as a refugee, determined to get a college degree — an option that was never available to her mother, my grandmother.

She worked multiple jobs to put herself through school and ultimately earned her bachelor’s and masters, all while raising four children.

My entire life is rooted in the value of education. It’s why I endured in high school, studying into the night to reach my dreams of going to university.

It’s why I spent summers working at Girls Who Code, interning and applying for scholarships.

It’s why, with my family’s support, I was accepted to George Washington University as a computer science major, a field where the numbers say I — as a Black woman — do not belong.

But this fall, my learning has to take a backseat. With no end to the global pandemic in sight, college students at schools across the country are facing the reality of taking classes remotely (either by choice or by mandate).

Unfortunately, for many of my Black peers and me, the path forward is more complicated. We do not have the notion espoused by some that if we get the virus we’ll be fine.

We are unable to embrace such naivete expressed by others about people my age, as Black Americans are far more likely to face hospitalization or death from Covid-19 than White Americans and the numbers of infections among the young are rising.

That means we’re more likely to have experienced the pain and loss of this pandemic firsthand, while simultaneously grappling with another pandemic that’s plagued us for centuries: racism.

I personally know 10 people who’ve been infected by the coronavirus and I am grieving five people who have died. All of them are people of color.

I won’t risk adding my mom or siblings or anyone in my community to those numbers by going back to campus in the fall. So, even before GWU mandated remote education, I knew I’d have to learn virtually.

But with remote education, I risk falling behind. By trying to make sure my mom, brothers, and sister do not become a statistic in this pandemic, I’ve become one myself.

According to a recent report by McKinsey, the pandemic could exacerbate existing achievement gaps between White students and students of color by as much as 20%. And learning losses translate to economic losses.

The same report predicts that the average K-12 student in the US could lose up to $82,000 (Ksh.8,860,920) in lifetime earnings, with numbers being higher for people of color. That is to say nothing of the emotional trauma this pandemic has caused for our communities, specifically.

It is hard to fathom such a setback, and brutal to see hard data suggesting it is inevitable. I beat the odds as a Black woman in STEM — we make up less than 2% of computer science graduates nationwide, according to the National Center for Women and Information Technology. At my school, I only know one other Black woman in my major and year.

My education feels like it is under attack, and my dreams seemingly are evaporating before my eyes. I wish I could go back to campus in the fall, and I wish even more that my fate weren’t so influenced by my race, gender or socioeconomic status.

I have peers across the country whose families and communities haven’t been touched by the pandemic or school closures in the same way that low-income, Black, and Latinx families have. This coming semester, some will have the benefit of high-speed internet.

They will likely have the hardware they need to learn — personal laptops or cell phones or tablets. In some cases, all of the above.

They will, perhaps most importantly, because of their ability to participate in class in a more normal — albeit, virtual — way, have a greater sense of belonging and community that is vital for success in school and the workforce.

And for those of my more privileged peers who are able to go back to class — if it doesn’t work out, if there are outbreaks and schools decide to close their doors again — they will likely be okay. They can afford to move in, move out, break leases, fly home.

I do not resent them, or blame them for going back to their campuses. I only wish the nation was more prepared to support the students left looking in from the outside — students like me.

Will financial aid packages still be available to those of us whose Federal Work Study hours have — like mine — been cut down, impacting our access to that aid?

Will universities be supportive of those of us who cannot manage, while remote, the rigor of a full-time class schedule because we don’t have the space, or because we share hardware with siblings, or lack access to high-speed internet, or have taken on second or third jobs, or have caregiving responsibilities at home?

Are schools supplying professors with resources to teach in an inclusive and equitable way? Are mental health resources accessible for highest-need students?

It may not be possible to protect our health, but we should not have to sacrifice our futures. It is a cruel irony that I am about the same age my mom was when her education was disrupted by forces outside her control.

It gives me hope that she was able to finish school. That happened in part because of her faith and resilience, and in part because this country — a place of refuge for our family — gave her a fighting chance. I wonder, will it give my generation the same?

KaYesu Machayo is a first-generation Ugandan-Kenyan-American and a junior at The George Washington University pursuing a degree in computer science. A graduate of The Girls Who Code Summer Immersion Program, she has been a teaching assistant and operations specialist for Girls Who Code as well. The views expressed here are hers.