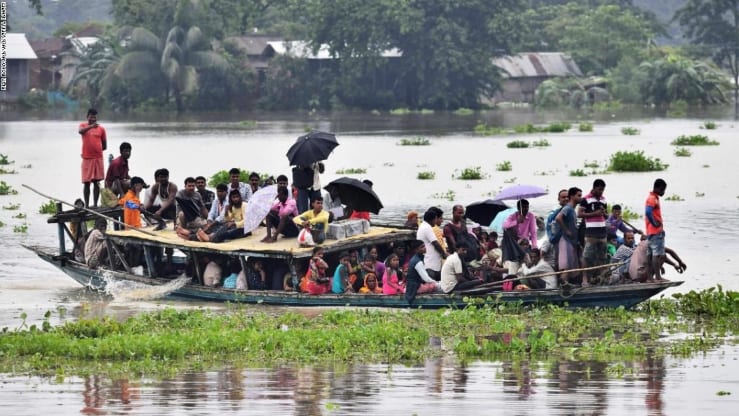 The death toll in South Asia continues to rise after flooding and landslides ravaged the border region of India and Nepal, leaving tens of thousands displaced and millions affected.

More than 100 people have died in India and Nepal since monsoon flooding began over the weekend. The rains have stopped in Nepal on Tuesday, but the disaster is far from over — with heavy downpours expected to continue in India, Bangladesh and Pakistan in the coming days.

Nepal appears the worst hit so far, with at least 78 people dead, officials said on Tuesday. A further 29 have died in the northeastern Indian states of Bihar and Assam.

Flash floods have also ripped through Pakistan and Bangladesh, which border India on the east and west, respectively. 28 have died in Pakistan, and 16 in Bangladesh, according to authorities from each country.

More than 6.7 million people in India have been directly affected by the floods, according to official statements — about 2.5 million in Bihar and 4.2 million in Assam.

Across the border area, over a million hectares of cropland (2,471,054 acres) has been submerged, roads and homes have been damaged, livestock has been swept away and killed, and entire wildlife sanctuaries have been cut off.

Federal and state agencies are working around the clock across all four affected countries to evacuate those in high-risk areas. More than 42,000 security personnel in Nepal have been mobilized for rescue and relief efforts — including the police, army, and paramilitary forces.

Disaster relief agencies are now scrambling to provide housing and crucial supplies for families who have been displaced. Over 116,000 in Bihar and 83,000 in Assam have been evacuated to temporary shelters, and state agencies are distributing rice, biscuits, baby food, and candles to hundreds of relief centers, according to state officials.

Meanwhile in Bangladesh, many people live in homes made of bamboo, mud, or timber — which provide little to no protection in floods, said Azmat Ulla, head of the the Bangladesh office of the International Federation of Red Cross and Red Crescent Societies (IFRC).

More than 200,000 Bangladeshis have been displaced and are living in temporary camps, according to the country’s state minister for disaster management and relief.

Rohingya refugees in the southeastern corner of Bangladesh are particularly vulnerable. One million Rohingya Muslims who fled persecution in nearby Myanmar are now living in overcrowded camps — and 400 of these makeshift homes have been destroyed by the floods, leaving 3,000 refugees displaced, said Ulla.

Aid organizations and health workers have other concerns as well — waterborne diseases like diarrhea are known to spread in the aftermath of floods, and destroyed sewage systems could exacerbate those sanitation issues.

The loss of crops and livestock is another potentially devastating long-term effect.

“There are still communities that depend very much on the crops,” Ulla told CNN. “They lose their crops, they lose their livelihoods.”

The monsoon rains began on Thursday in Nepal, with tens of thousands evacuated after major rivers swelled to dangerous levels, according to the Nepalese Ministry of Home Affairs.

The monsoon rains and the accompanying floods are an annual occurrence — they bring much-needed water to farmers and drought-hit regions each year, but the sudden downpours also regularly trigger deadly floods and landslides.

Changes in climate has led to increasingly extreme seasons across South Asia. Just last month, swathes of India — including the major cities of Mumbai and Chennai — nearly ran out of water, with people lining up for hours for meager daily allocations of government-provided water.

The drought may also have dried up the land, making it harder and less absorbent, said CNN meteorologists — therefore exacerbating the floods when the monsoon rains arrive.

Residents are forced from one unlivable extreme to the next — from having no water to drink to escaping rushing floodwater.