12 killed in explosion at mosque during Friday prayers 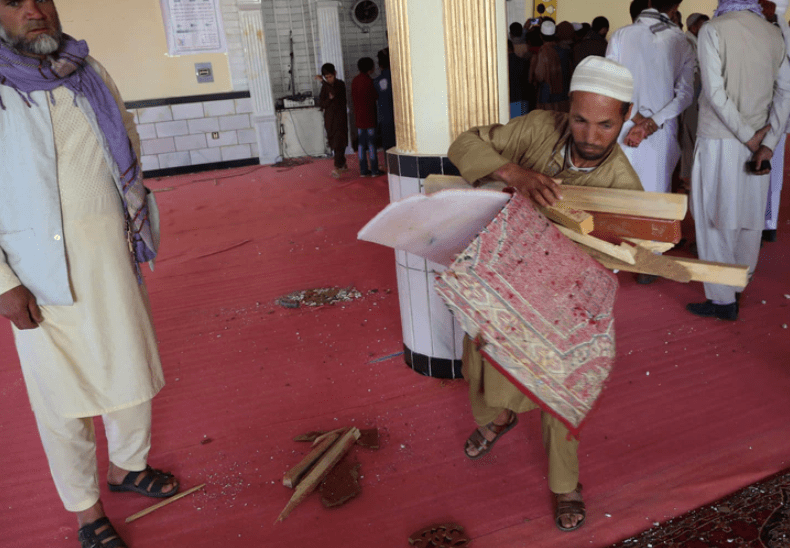 An explosion inside a mosque on the outskirts of the Afghan capital, Kabul, killed at least 12 people during Friday prayers as worshippers gathered for the Eid al-Fitr holiday during a cease-fire.

The Taliban insurgent group, which declared the three-day truce for the holiday, condemned the attack in a statement.

Islamic State claimed responsibility for the attack Saturday through its Nasheer news agency on Telegram.

Ferdous Faramarz, spokesman for the Kabul police, said the mosque’s imam was among the 12 dead and at least 15 people were wounded in the blast in the capital’s Shakar Dara district.

The blast came less than a week after an explosion at a school killed about 80 people, most of them schoolgirls from the ethnic Hazara Shiite Muslim minority. The Taliban also denounced that attack and no one claimed responsibility.

Militant groups, such as Islamic State, have not signed on to the holiday cease-fire.

Violence on the rise

Violence, including attacks on civilians, has increased in Afghanistan even as the United States has begun withdrawing its remaining troops over the next four months.

There have been no major reports so far of direct fighting between government forces and the Taliban during the holiday cease-fire, which began Thursday at the end of the Ramadan fasting month. However, roadside bombings have continued with at least 11 civilians reported killed and 13 wounded in four bombings Thursday.

The government and the Taliban have been holding political talks to try to end their conflict as Washington pulls its troops out 20 years after U.S. bombing forced the Taliban from power. Each side at the talks has accused the other of provoking and failing to halt attacks against civilians.

“Today’s attack on a mosque in Shakar Dara district of Kabul during Friday prayer is completely opposing the idea of Eid al-Fitr as a family holiday celebrated in peace,” the European Union’s mission in Afghanistan said on Twitter.