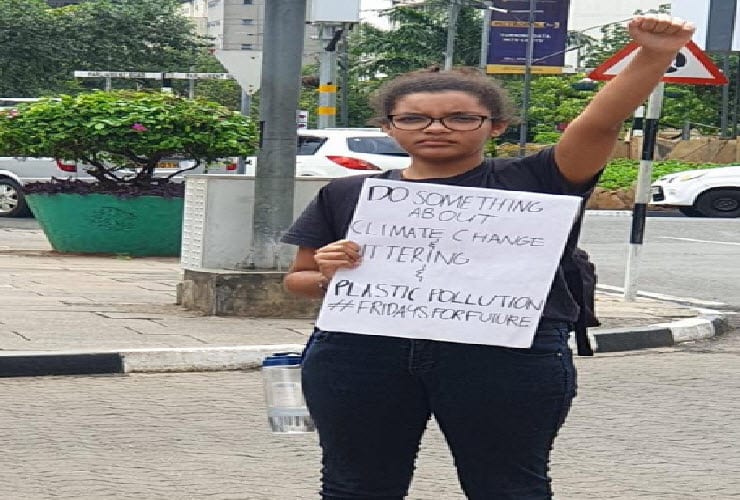 A 14-year-old girl spent the better part of her Friday morning standing outside Parliament buildings holding a placard that with a message on tackling climate change.

Yvette Hupje has started a petition to ban the use of single use plastics bottles and was hoping to get the attention of Members of Parliament.

Hupje who is a student from Brookhouse School is passionate about a cleaner, greener, plastic free Kenya.

Yvette came prepared and flashed her placard to all the vehicles that left parliament and to those that drove by.

Hupje later told Citizen Digital that she was a bit skeptical of her attempt but it did not deter her.

“A few months ago I started a petition to stop single use plastic bottles… my main aim is to create environmentally friendly bottle ad bins to be placed around bus stops,” said Yvette.

Yvette was not all alone though, her mother, Liz Hupje, came to cheer her on. According to Liz, her daughter has been passionate about the environment for years now.

“She does not like litter.. and at some point she told me that I have to do something,” said Liz Hupje.

Yvette took time to explain to passersby what it was all about and the implications of environmental degradation if something is not done now.

Yvette’s online petition has over 16,000 people signed up for the movement and still has that one things she needs to get done.

“I hope that the parliament can notice what I am doing or the issues that I am doing… I’m hoping there will be less production and sale of plastics,” said Yvette.

“I am so proud of her… I think she should carry on… Like today she stood on her own…,” said Liz Hupje.

Her hashtag #Friday’sForFuture has been trending.

She hopes that one day she can change the minds of many through partners like NEMA to teach the importance of proper disposal of waste beginning with children, one person, one bottle at a time.