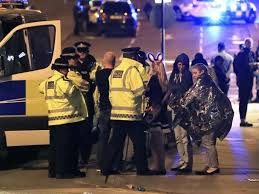 The death toll from an explosion outside an Ariana Grande concert at the Manchester Arena has risen to 22, according to Greater Manchester Police. The attacker, who police believe was a suicide bomber, also died in the attack.

British families were left desperately hoping for word of their children’s safety following a suspected terror attack outside the Ariana Grande pop concert at the Manchester Arena Monday night.

An explosion rocked the venue as the singer was finishing her set, killing at least 19 people and injuring almost 60 others.

Manchester’s top police officer confirmed that police were treating as a “terrorist incident.” Sources tell CNN a man at the scene has been identified as a likely suicide bomber.

If confirmed as a terror incident, it would be the deadliest attack on British soil since the 2005 London bombings, which killed 52 people.

As concertgoers — many of them young fans of the singer — were beginning to leave the arena after Grande’s closing set, an explosion rocked the area. Confusion followed as people fled in search of safety, and the sound of wailing sirens soon cut through the smoky air outside the arena.

The incident happened shortly after Grande had left the stage, according to eyewitnesses. Calvin Welsford, an 18-year-old concertgoer, said he heard a “loud bang” a couple of minutes after Grande’s set had finished.

“Ariana was off the stage, she’d finished her set,” he said. “I looked around because I heard this big bang, people screaming and crying and flooded towards the stage.”

Social media posts from the scene showed panicked concertgoers running down the arena’s stairs in an attempt to get away.

The city’s Manchester Royal Infirmary Hospital was blocked off to all but essential staff due to what the facility called a major incident.

Grande, who had just finished the first of three scheduled UK performances when the blast hit, was not injured. She tweeted several hours later: “broken. from the bottom of my heart, i am so so sorry. i don’t have words.”

After the initial incident, police carried out a precautionary controlled explosion nearby but the item turned out to be discarded clothing, not a “suspicious item,” Greater Manchester Police said.

A US official said suicide bombing is now considered to be the “likely” reason for the blast and a male at the scene in Manchester has been identified as the probable bomber.

A US Department of Homeland Security statement said it was “closely monitoring” the situation and added that the department has “no information to indicate a ‘specific credible threat involving music venues in the United States.”

Home Secretary Amber Rudd said: “This particular attack was aimed at the most vulnerable in our society, young people, children at a concert.” She added that Britons should “remain alert, not alarmed” in the wake of the apparent attack.

The crowd was made up of mainly younger people who had come to see Grande, who is on a European and Latin American tour.

Distraught, waiting by the phone

Manchester resident Charlotte Campbell told CNN her 15-year-old daughter, Olivia, went to the concert with a friend, and neither had been in contact since the explosion.

“We’ve tried everything we can. They’re telling us to wait by the phones. Her dad is out looking. … It’s the most horrible feeling ever, to know your daughter is there and you don’t know whether she’s dead or alive,” she said.

Through tears, Campbell said she didn’t know how anyone could do this to “innocent children.”

“I want her home and I want her safe. … I just want her to walk through the door.”

Eyewitness Karen Ford had taken her 13-year-old daughter to the concert.

“It was mayhem on the street, there were children crying, trying to get in touch with parents, parents on their phones trying to contact their kids,” she said, adding that cell connection was poor as so many people were using their phones simultaneously.

“I brought my baby home, which some people won’t be (able to do) tonight.”

A nearby Holiday Inn hotel became a focal point for parents searching for their children who had been at the concert. Some hotels opened their doors to people who could not get home due to an area lockdown.

Taxis and local people offered free rides to those affected.

Manchester Victoria railway station, which is next to the arena, will remain closed Tuesday, UK National Rail announced.

British Prime Minister Theresa May issued a statement, confirming that police are treating the incident as a terror attack. She has suspended campaigning for June 8 general election and will chair a meeting of the Government’s emergency Cobra committee on Tuesday morning.

“We are working to establish the full details of what is being treated by the police as an appalling terrorist attack. All our thoughts are with the victims and the families of those who have been affected.”

The leader of Britain’s Labour Party, Jeremy Corbyn, offered support on Twitter. “Terrible incident in Manchester. My thoughts are with all those affected and our brilliant emergency services.”

“We are deeply saddened to learn of tonight’s devastating event in Manchester. Our thoughts and prayers are with all those affected by this tragedy,” the post says.

Grande’s publicist, Joseph Carozza, confirmed to the Los Angeles Times that the performer was safe.

“Ariana is OK. We are further investigating what happened,” he said.