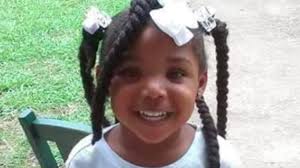 A three year-old girl who was abducted from a birthday party more than a week ago has been found dead in Alabama.

Kamille McKinney had been abducted from a birthday party in Birmingham.

On Wednesday, her remains were positively identified by authorities but the cause and time of death is  yet to be established.

According to CNN, the remains were found inside a dumpster in a landfill, not far from the apartment complex where she was last seen.

Two suspects have been arrested after witnesses connected them to a vehicle spotted on video footage that was recorded on the day the girl went missing.

The surveillance footage released by police shows the two men outside the housing complex where Kamille was seen last on the night she disappeared.

The video shows one man first walking past her and another child.

Later, another man stops and appears to talk to them. The video ends just after the two children follow the second man out of view of the camera.

“Drop her off anywhere and let her out. Somebody will see her. Everybody knows what’s going on and that will be the end of that. We just want the baby back.” he said.