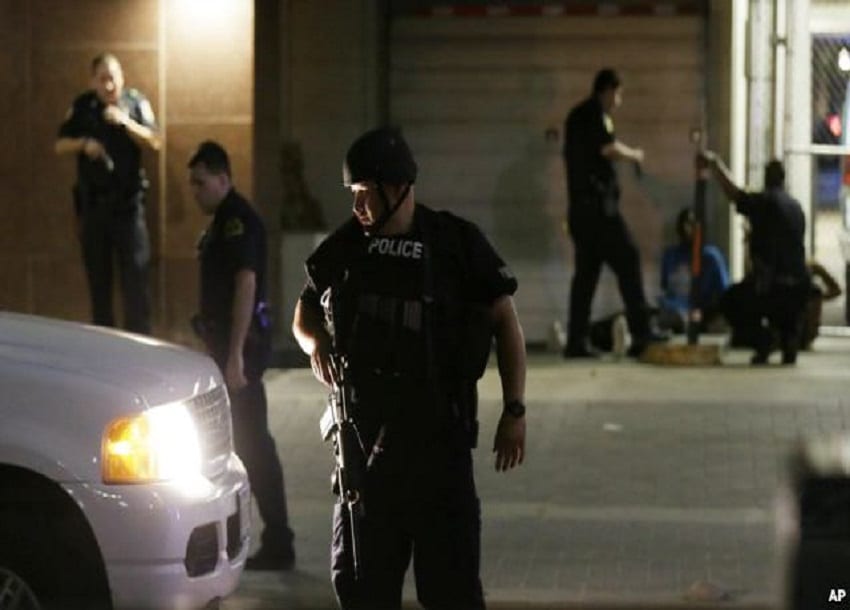 A demonstration in the southern U.S. city of Dallas, Texas, Thursday night erupted into chaos with 11 police officers shot.  Four of the officers have died from their wounds.

Dallas police say they have detained one suspect after a shootout with the police and are in negotiations with another suspect authorities say is not cooperating with police.

Officials say the attackers had intended widespread damage and a suspicious package has been secured by the city’s bomb squad.

Police had issued a photograph of an armed black man in camouflage dress who attended the demonstration as “a person of interest” in Thursday’s shooting.  The man later turned himself into authorities, who say he was apparently not involved in the shootings.

Police say two snipers opened fire on police during the demonstration that was being held to protest the police killings of two black men earlier this week in separate incidents –one in Minnesota, the other in Louisiana.  The two killings of the black men are the latest incidents in a string of shootings in the U.S. of what is widely viewed as examples of the excessive use of force in police dealings with minorities.

Police described the downtown Dallas site as an “active shooter situation” and have told demonstrators to leave the area, which is just blocks away from where U.S. President John Kennedy was shot and killed in 1963.  At least two SWAT (Special Weapons and Tactics) teams are on the scene.

The deadly violence comes just hours after President Barack Obama urged American law enforcement to eliminate racial bias from its ranks, saying “all of us as Americans should be troubled” by the videotaped police shootings of black men this week in Minnesota and Louisiana.

“We’ve seen tragedies like this too many times,” Obama said upon arriving in Warsaw Friday morning for a two-day meeting of NATO leaders. He said he felt compelled to address the shootings in a televised statement — in addition to a Facebook post published hours earlier — given the “extraordinary interest” in the incidents.

Two African American men were fatally shot by police officers in the United States this week. The shootings again have raised questions about excessive police force, particularly against minorities.

The president said all Americans should be concerned about the problem of frequent police shootings of black people, which he called “symptomatic of a broader set of racial disparities that exist” in the U.S. justice system. He said those disparities are backed up by statistics that show African Americans and Hispanics are treated differently by police.

“When incidents like this occur, there’s a big chunk of our fellow citizenry that feels as if because of the color of their skin, they are not being treated the same,” he said. “And that hurts.”

Earlier this week, an African American man was fatally shot by a police officer during a routine traffic stop in the midwestern city of Falcon Heights, Minnesota, prompting Governor Mark Dayton to call for an independent federal investigation.

Police say 32-year-old Philando Castile of nearby St. Paul was killed after a policeman pulled over his vehicle. They said the incident began when an officer initiated a traffic stop, but they have not further explained what led to the shooting. They said the officer involved has been placed on paid administrative leave, which is standard procedure in cases like this.

Governor Dayton said he does not believe Castile would have been treated that way if he had been white.

The state’s Bureau of Criminal Apprehension has been called in to investigate.

A child and a woman were passengers in the car when Castile was killed. Shortly after the shots were fired, the woman began broadcasting video on her cell phone, streaming it live on her private Facebook account.

Castile was shown slumped in the car and bleeding profusely with at least one officer pointing a gun through the driver’s side window.

The shooting came one day after police killed 37-year-old Alton Sterling in the southern city of Baton Rouge, Louisiana. Two white officers, responding to a call about an armed man, had Sterling pinned to the ground when at least one officer shot him. The investigation into the shooting is being led by the U.S. Department of Justice’s Civil Rights Division.

NAACP President and CEO William Brooks told VOA the rights organization is pushing for the passage of several pieces of legislation, including comprehensive racial profiling laws at the state and federal levels.

Samuel Walker, professor emeritus at the University of Nebraska and an expert on police accountability, told VOA, “There’s deep seated racial prejudice” among some white Americans “and that plays out in police encounters.” Walker said some police officers have “an unconscious bias” that causes them to “react accordingly.”

“We’re really the prisoners of our history in this country,” Walker added.

With the proliferation of video recording devices, Walker said the United States is in the midst of “a digital revolution of policing” that is having a “tremendous effect” on the practice nationwide.

Although fatal police shootings go unabated, videos have had a “huge impact on public understanding of policing,” he said.

There have been 509 fatal police shootings in the United States in 2016 compared to 990 last year, according to a national database maintained byThe Washington Post.

Continuous deadly force training in local police departments would help officers better handle encounters with the public, said Walker; but he said such training is “hit or miss” due to the lack of national standards for the 15,000 separate local law enforcement agencies across the U.S.