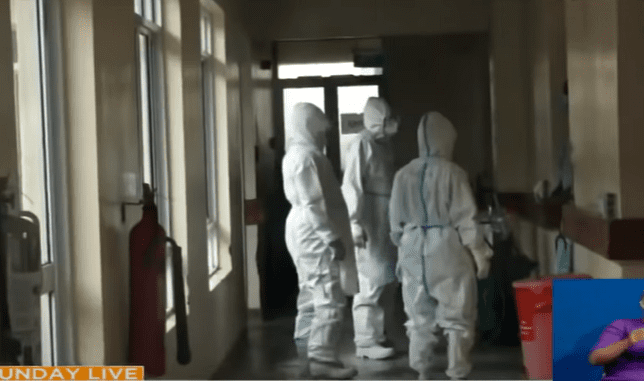 A day after after Health Cabinet Secretary Mutahi Kagwe warned that hospitals in the capital are being stretched thin due to a surge in new infections, the main government COVID-19 centre at Mbagathi is saturated.

All the 48 beds in the facility are occupied, thereby forcing the hospital to convert a ward meant for TB patients into a COVID-19 holding ward.

The irony however is this, the tent which was meant to be a makeshift COVID-19 ward to handle additional patients with a capacity of 120 beds is unequipped one year later.

Construction tools are still lying around, inside the tent are beds that would have given patients hope in the war against the invisible enemy, but they lie idle never mind the fact that hospitals around the capital are chocking with the surge in infections and high number of patients requiring urgent medical care.

Sources within the hospital reveal that the 48 patients are under the care of only two nurses; despite the fatigue, they are the patients’ only hope. But they are also putting their lives at risk owing to lack of Personal Protective Equipment (PPE).

“NERC has directed that it doesn’t matter whether a county has paid its account or not, let every county be given PPEs that are required for the protection of pour people,” he said.

But even as the battle with COVID-19 goes on in hospitals, police were out on Saturday night effecting orders to arrest those flouting protocols including the curfew.

Many road users along Thika road were caught off guard when the clock struck 10pm,  the commencement period for the curfew, as police mounted road blocks and no road user was allowed to pass.

The World Health Organisation (WHO) Director General Tedros Adhanom had Friday warned that due to the emergence of the Delta variant, gains that had been made were now at risk if nations relax in enforcing protocols.