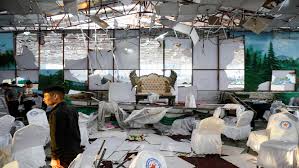 A suicide bomber killed 63 people and wounded 182 in an attack on a packed wedding reception in the Afghan capital, the interior ministry said on Sunday, as violence shows no sign of easing despite hopes for a deal on a U.S. troop withdrawal.

The Saturday night attack came as the Taliban and the United States are trying to negotiate an agreement on the withdrawal of U.S. forces in exchange for a Taliban commitment on security and peace talks with Afghanistan’s U.S.-backed government.

The Taliban denied responsibility and condemned the blast at a west Kabul wedding hall, in a minority Shi’ite neighborhood, packed with people celebrating a marriage.

Women and children were among the casualties, interior ministry spokesman Nasrat Rahimi said, as families thronged to Kabul’s crowded cemeteries to lay loved-ones to rest.

President Ashraf Ghani said the militants could not escape blame for the “barbaric” attack.