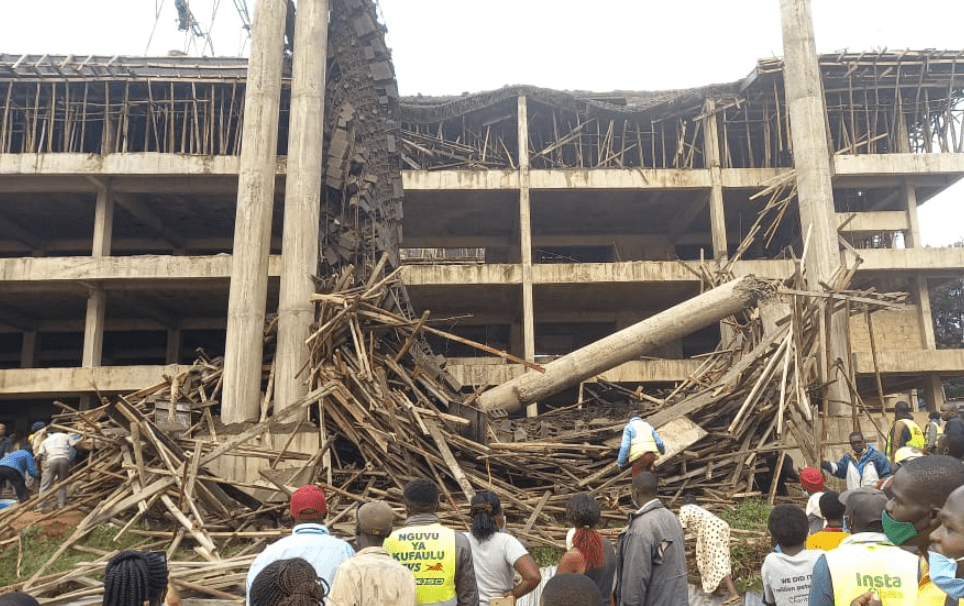 At least eight people were injured after a multimillion-shilling building under construction that was set to host the Nyamira County Assembly collapsed on Thursday evening.

According to County Commissioner Amos Mariba, the 8 were among 51 people who were on site when the building said to have cost around Ksh.379 million collapsed; the other 43 escaped unhurt.

Health CEC Dr Silas Ayunga said five out of the 8 suffered minor injuries and have since been treated and discharged.

The remaining three suffered severe injures that required imaging for decision making and are presently admitted at the Nyamira County Referral Hospital for observation.

All of them are in stable condition but the one with the most serious injury is getting a chest CT scan and x-ray of the neck done.

County Commissioner Mariba, while saying no casualties were reported, added that a probe has since been launched to establish the cause of the incident.

Nyamira County Assembly Speaker Moffat Teya also tasked the Department of Public Works, particularly the Project Manager and the entire team of Engineers together with the Contractor to expeditiously investigate and give a comprehensive report on the matter.

“I urge our good residents to be calm and that once the Report from the Contractor, the Project Manager and the entire team of Engineers is ready we shall publicise it to the public to know what exactly transpired.”

He further added: “There are no reported fatalities. We wish quick recovery to the injured. We thank H. E Governor, the County Commissioner, the County Emergency Rescue Team and members of the public for moving with speed to rescue and save lives. We shall keep you posted.”