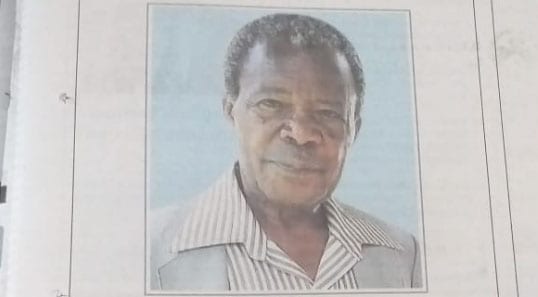 Adrian Muteshi, the Eldoret farmer who won a land dispute against DP William Ruto seven years ago, has died.

He is remembered for having engaged the DP in a protracted court case over an 100-acre farm in Uasin Gishu during the 2008 post-election violence.

He also sued the Attorney-General and one Ms Dorothy Yator for selling the land to Dr. Ruto.

In 2013, the court ruled in favour of Mr. Muteshi saying he had proven beyond reasonable doubt that the land was his.

Dr. Ruto was then ordered to pay Ksh.5 million to Mr. Muteshi for illegally occupying his land.

The controversial 100-acre farm was then returned to the person who the court had determined as the rightful owner: Mr. Adrian Muteshi.

DP Ruto hands over 100 acres farm to Adrian Muteshi with who they've been locked in a prolonged court dispute over the land.

However, in February 2014, the Deputy President appealed the court order to pay the Ksh. 5million.

The Daily Nation reported Dr. Ruto’s argument that “his entry, possession and ownership of the parcel was licensed by the Commissioner of Lands and the Lands Registrar”.

Three years later, the DP withdrew his appeal against the High Court judgement.