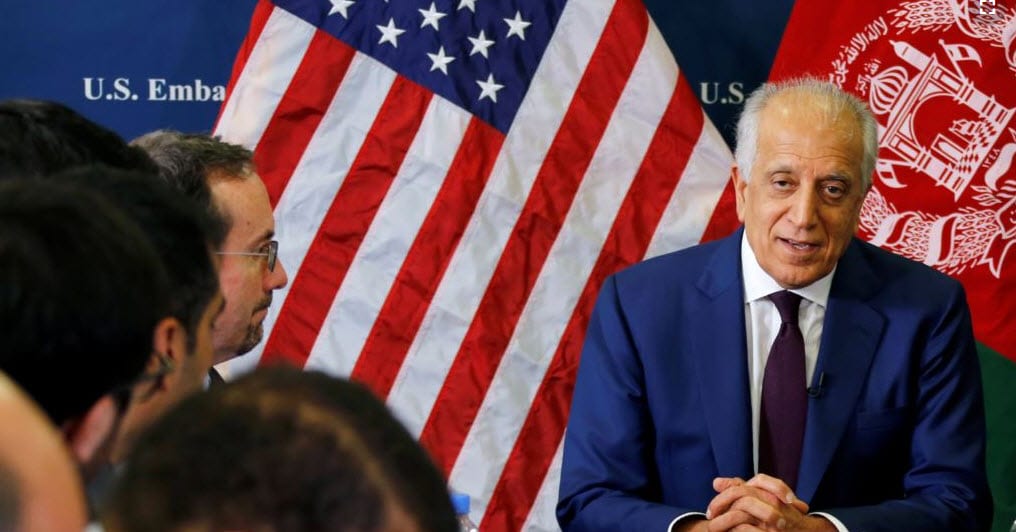 The Afghan Taliban said Tuesday they had called off peace talks with U.S. officials in Qatar this week due to an “agenda disagreement,” especially over the involvement of Afghan officials as well as a possible cease-fire and prisoner exchange.

The U.S. ambassador to Kabul, John Bass, tweeted that reports of U.S.-Taliban talks on Wednesday were “inaccurate” and added: “Taliban should talk to fellow Afghans as much as they talk to media.”

A separate tweet from the U.S. embassy in the Afghan capital stressed that intra-Afghan talks were “essential” to settling the conflict.

The State Department later announced that U.S. Special Representative for Afghanistan Reconciliation Zalmay Khalilzad would lead an interagency delegation to India, China, Afghanistan and Pakistan from Jan. 8-21 that would meet senior government officials in each country “to facilitate an intra-Afghan political settlement.”

“The U.S. goal is to promote dialogue among Afghans about how to end the conflict, and to encourage the parties to come together at the negotiating table to reach a political settlement,” the statement said.

The war in Afghanistan is America’s longest overseas military intervention. It has cost Washington nearly $1 trillion and killed tens of thousands of people.

Reports last month about U.S. President Donald Trump’s plans to withdraw thousands of troops from Afghanistan triggered uncertainty in Kabul, which depends on the United States and other foreign powers for military support and training.

A Taliban source told Reuters that U.S. officials had insisted that the Taliban should meet Afghan officials in Qatar and said “both sides were in disagreement over declaring a cease-fire in 2019.”

“Both sides have agreed to not meet in Qatar,” he added.

A Taliban leader had told Reuters that the talks, which would have been the fourth round with Khalilzad, would have involved a U.S. withdrawal, prisoner exchange and the lifting of a ban on movement of Taliban leaders.

Taliban sources said that they had demanded that U.S. authorities release 25,000 prisoners and they would free 3,000, but that U.S. officials were not keen to discuss the exchange at this stage.

“We would never announce any cease-fire until and unless we achieve major gains on the ground. We have the feeling that Zalmay Khalilzad doesn’t have enough power to make important decisions,” another Taliban official said.

The Taliban have rejected repeated requests from regional powers to allow Afghan officials to take part in the talks, insisting that the United States is their main adversary.

The insurgents, seeking to reimpose strict Islamic law after their 2001 ouster by U.S.-led troops, called off a meeting with U.S. officials in Saudi Arabia this week because of Riyadh’s insistence involving the Afghan government.

The United States sent troops to Afghanistan after the Sept. 11, 2001, attacks on New York and Washington. At its peak the U.S. deployment involved more than 100,000 troops, but Washington withdrew most in 2014 and now has around 14,000 troops in the country as part of a NATO-led mission aiding Afghan security forces and hunting militants.

As peace talks gained momentum, a draft agreement drawn up by the influential U.S. think tank RAND Corporation outlining the clauses for a potential peace deal was circulated among Afghan officials and diplomats in Kabul.

The U.S. embassy tweet said RAND’s work was independent of the U.S. government and did not represent U.S. policy.