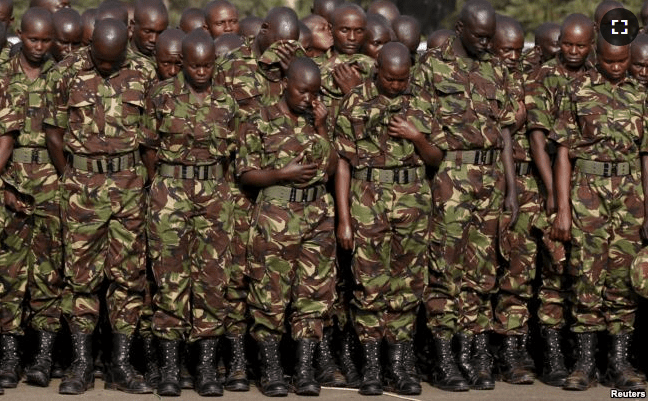 A draft resolution introduced this week by the three African countries on the United Nations’ Security Council could shift peacekeeping responsibilities across the continent to the African Union(AU).

The resolution, introduced by Ethiopia, Equatorial Guinea and Côte d’Ivoire, calls for the U.N., on a case-by-case basis, to fund peacekeeping missions led by the AU.

The U.N. currently runs most peacekeeping efforts in Africa, with a budget that dwarfs the African Union’s. But the AU’s peacekeeping role has grown, especially in East Africa, where AMISOM, the AU’s Mission in Somalia, has fought back against a violent insurgency for more than a decade.

If passed, the proposed resolution would effectively outsource at least some future peacekeeping missions to the AU, transferring authority and oversight to the pan-African organization based in Addis Ababa, Ethiopia.

The resolution has received key backing from both France and China, two of the Security Council’s five permanent members.

But the United States has raised questions about whether a transfer of authority to the AU might raise peacekeeping costs and complicate efforts to oversee potential human rights abuses in conflict zones.

Those concerns reflect U.S. policies on peacekeeping efforts that date back to the Bush and Obama administrations, Grant Harris, the former senior director for African Affairs under the Obama Whitehouse, told VOA.

“The United States has had a longstanding and consistent concern about outsourcing peacekeeping missions without full confidence that human rights compliance — obligations — will be met,” Harris said.

Funding for the U.N.’s peacekeeping budget comes from contributions from member states proportional to their GDPs. The U.S. and China are the biggest contributors, but China pays 18 percent less than the United States’ annual contribution of more than $2 billion.

China hosted a debate on the resolution at the U.N.’s headquarters in New York. That demonstrates a clear commitment to the importance of peacekeeping in Africa but also solidarity with the AU, Harris said.

“China is really endorsing and taking a stand on an African Union priority,” he added.

But Beijing has also been quick to invest in Africa without preconditions around governance or adherence to international standards. And that makes the AU resolution more appealing to Beijing than the U.S., according to Harris.

“They have consistently been less concerned about the human rights and other compliance issues that the United States has staked out as a major concern in supporting exterior missions with U.N. funding,” Harris said.

Half the U.N.’s 14 active peacekeeping missions focus on African conflicts, and the multilateral organization currently has tens of thousands of troops deployed in seven countries.

But repeated allegations of corruption and abuse have reduced confidence in the U.N.’s ability to play a positive role in Africa, fueling calls for African-led interventions.

From South Sudan to the Central African Republic, investigations into the U.N.’s role in Africa have revealed evidence of inaction, partiality and sexual abuse.

As the largest multinational organization based on the continent, the African Union is an obvious alternative. It too, however, has faced controversy, including allegations that AU troops have killed victims

For the draft resolution to move forward, the U.S. will need to find answers to its concerns. As a permanent member of the Security Council, the United States has veto power over any new resolution.

That could lead to a confrontation with Beijing.

But Harris cautions against framing the resolution as a U.S.-Sino showdown. And a consensus may be possible, if all sides are willing to be flexible.

Ideas about how best to handle peacekeeping are evolving, Harris said, with an eye toward empowering the African Union.

“I hope the Trump administration is really engaging on those issues and the underlying motivations to see if there may be a way to provide greater support and more consistent support,” Harris said, “while still ensuring that their very valid concerns about human rights laws and about financial accountability are being met.”