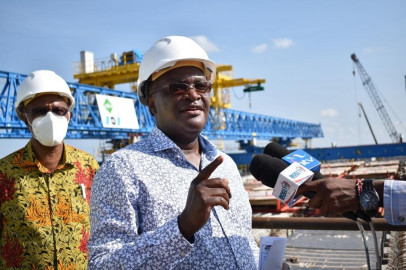 The construction of the 27-kilometre Nairobi Expressway from Mlolongo to Westlands has caused interruptions along parts of Mombasa road, Uhuru highway and Waiyaki way.

Transport Cabinet Secretary James Macharia has revealed that the government has set aside some Ksh.9 billion for the rehabilitation and improvement of the old road, now referred to as the lower deck.

The pillars supporting the upper deck sometimes smack in the middle of the old road, causing detours.

“When we do work as a result of the damage of the old road the contractor of course takes accountability for that,” said CS Macharia on Saturday, May 14, while opening the expressway for public use.

“We will be putting in the Bus Rapid Transport system (BRT), cycling paths and pedestrian pathways,” he added.

Another area to be immediately addressed is the road’s drainage system that failed the test of heavy rains just recently, with storm water being drained from the upper deck down Mombasa Road through dangling pipes.

CS Macharia at the same time noted that at least 11,000 vehicles have so far been registered on the road, with about 7,000 having registered to use the electronic toll collection.