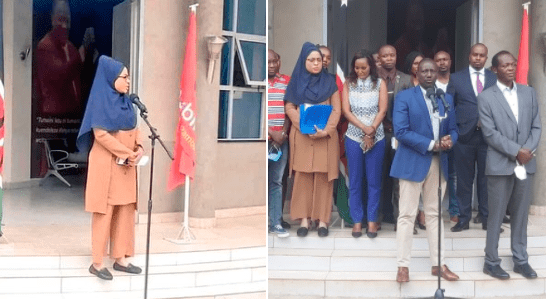 Deputy President William Ruto now says he is satisfied with the Jubilee Party’s decision to withdraw from the forthcoming Msambweni Constituency by-election but had a different view on the mini poll.

In a press briefing at the Jubilee Party headquarters on Wednesday, Ruto said he wanted the party to field a candidate in the by-election slated for December 15, 2020 but after a meeting with a section of Jubilee officials he had to accept the final decision.

“I have had a meeting with the secretary general and his officials here on the by-elections. They have briefed me on the decisions that have been made and I’m satisfied with what they have done.

I was of a different view on the party fielding a candidate in Msambweni but because a decision has already been made and communicated to the public, we will all stand by that decision that those who had intentions of vying on a Jubilee ticket in Msambweni will now look for alternatives maybe run as independent candidates s or in other political parties,” he said.

Earlier before the deputy president and Tuju came out to address the press, Sharlet Mariam, who decamped from ODM, caused a scene at the Jubilee Party headquarters demanding that she be handed the party’s ticket to contest in the by-election.

“It is the democratic right of the people of Msambweni to elect a leader that they think is fit to represent them in Parliament. I’m very disappointed and I’m asking Tuju to give us direction. Mimi sitoki hapa bila tikiti ya Jubilee. this is not fair where is the space of women and youth in this country,” she said.

In his address Ruto acknowledged Ms. Mariam’s quest to vie for the seat, adding that if she asks for his help in contesting for the position he will be willing to support her.

“We should have given the good lady here (Mariam) together with others a chance. But because of the decision that has already been made I sympathize with Madam Mariam…” said Ruto

On whether he was consulted on the decision by Jubilee to withdraw from the election, Ruto said,” “the Secretary General, to be fair to him, did send me some information about the possible decisions that would have been made. Unfortunately, a decision was made before we could finalize. But as a party we have the spirit of collective responsibility.”