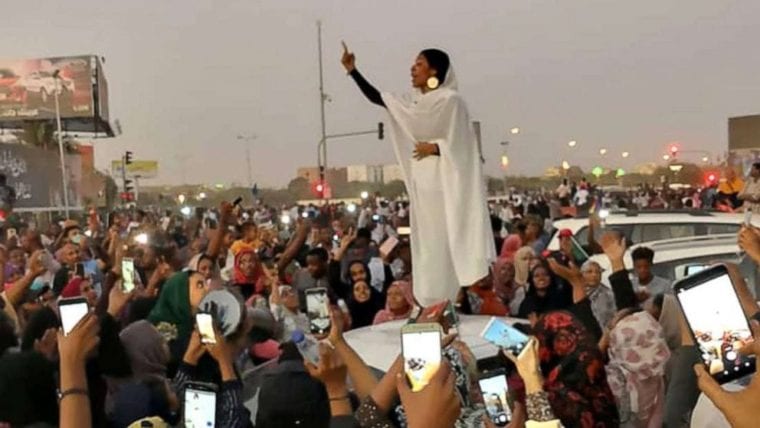 Alaa Salah, the woman who has come to symbolize the Sudan protests that forced out former president Omar al-Bashir, has said the revolution is far from over.

According to Salah, it sought to remove what she called a regime of “murder and tyranny” in its entirety.

Also Read: Alaa Salah says she chanted from atop a car to declare ‘Sudan is for all’

“Our demands are related to the removal of a corrupt regime from its roots… It destroyed Sudan. Corruption has spread (everywhere). A regime of murder and tyranny,” Salah told Reuters in an interview.

“We are currently in the squares because Bashir is part of the regime, and our idea and goal is the fall of the regime as a whole,” she said. “We want a better Sudan, a democratic state, one that judges all in accordance with the law, without favoritism.”

“Our revolution is continuing until our demands are met.”

Salah said that when she climbed on the car she was reciting a poem by Sudanese poet Azhari Mohamed Ali, entitled “The bullet doesn’t kill. What kills is the silence of people”.

“It is an inspirational poem,” said Salah. “Its words are a very accurate description of the Sudanese street.”

Alaa Salah rose to prominence after a video of her addressing protesters from a car roof at the beginning of April went viral. Women have played a prominent role in protests that began on Dec. 19, often forming a majority among demonstrators.

Sudan’s military ousted Bashir on April 11 and formed a transitional military council to run the country for up to two years before elections.

Bashir and some other former senior officials have been jailed, and the military council has announced a series of anti-corruption measures, but protesters are pushing for faster, deeper change.

Salah has become known as a “kendaka”, a name historically given to Nubian queens in ancient Sudan.

“The Nubian queen was brave, strong and wise,” said Salah, who said her nickname should apply to all female protesters.

“All of those struggling in the street and all the squares are kendakas.”