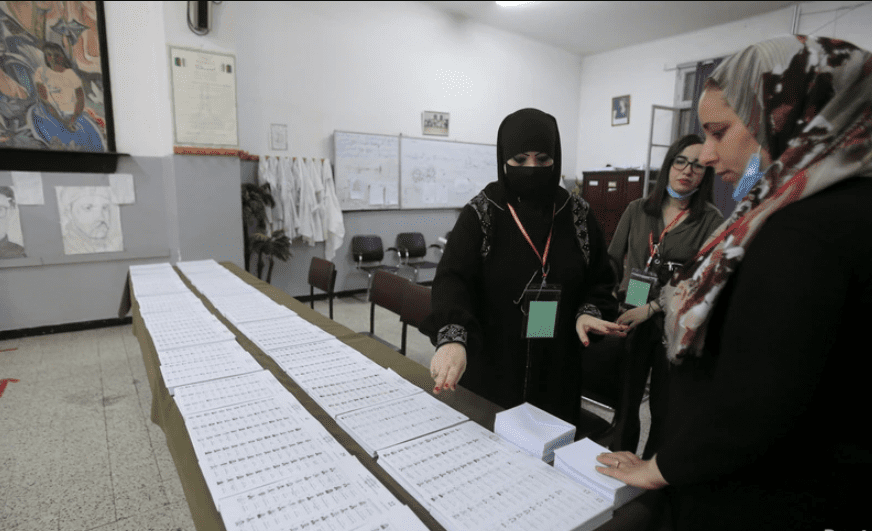 Some political parties called on voters to boycott the election, while the government urged them to “fulfill their electoral duty.”

Nevertheless, Mohammed Sharafi, head of Algeria’s Independent Electoral Commission, told journalists late Saturday that turnout “was over 30%” and that “more than 23.5 million voters had cast their ballots. Earlier, Saturday afternoon, Sharafi indicated that turnout was about 10.2% as of 2PM, but he said subsequent reports showed it was picking up.

“Voting results,” he insisted, “are no longer being manipulated, as they once were in previous elections.”

President Abdelmadjid Tebboune told a press conference after casting his ballot that he was hoping to put together a “new Algeria” after the country’s fresh parliament was seated. He said  democracy “gives citizens the right to boycott elections” but urged voters to “do their civic duty.”

He said citizens had the right to boycott the vote as long as they don’t try to impose their boycott on others. Everyone in the country, he said, was free to express convictions and views. Democracy, he said, requires that the majority respect the minority.

Sharafi told voters the “point of the election is that voters should know which candidates’ political platform coincides with their own positions and convictions.”

Abdel Qader, a young man from Algiers who identified himself as a member of the popular protest movement, told Arab media he would like to see a new government that’s responsive to the demands of the people.

He said it was his hope that the new government formed after the elections would respond to the demands of the popular protest movement and that conflicts would start resolving themselves.

Khattar Abou Diab, who teaches political science at the University of Paris, told VOA that Algeria’s political landscape was a bit “disorganized,” but that the country’s political leaders were “seeking a new political legitimacy.”

He said there were many political candidates and the electoral landscape was not entirely clear, but that the president appeared to be trying to win over independents to put together a new political majority.

Voters were given an unusually large number of lists of candidates to pick from Saturday. Almost two dozen lists could be seen at some polling stations.

Egyptian political sociologist Said Sadek told VOA that Algerian voters remained suspicious and disappointed that the regime did not meet the demands of the popular revolutionary movement that toppled Bouteflika. “Algeria also continues to suffer from economic woes, corruption and distrust,” he said.

Abdallah Jaballah, leader of the Islamist Growth and Justice Party, told Arab media he was not pleased with the way the situation was evolving.

He said the government had imposed this election on the people, and that it would either continue down this path or would back off and respond to public opinion.

Final results of Saturday’s parliamentary voting were not expected until next week.