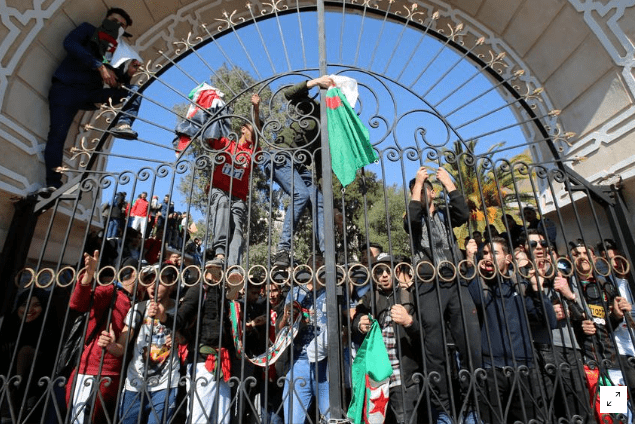 Students determined to pursue Algeria’s biggest anti-government protests in years boycotted classes on Monday to denounce an offer by President Abdelaziz Bouteflika to run in elections next month but not to serve a full term if re-elected.

Bouteflika’s offer, made on Sunday, appeared aimed at taking the steam out of youthful opposition to his 20-year rule and shore up an establishment dominated by aging revolutionary stalwarts of the 1954-62 independence war against France.

A former Algerian government minister resigned as a lawmaker and member of the ruling FLN party on Monday, a rare sign of discontent within an elite coming under unprecedented pressure.

Sidi Ferroukhi, who has served as agriculture minister, did not address Bouteflika in a Facebook statement, saying only that Algeria was going through exceptional circumstances and change.

A group of opposition leaders and political activists called for a postponement of the election.

Bouteflika’s political survival may hinge on how the elite, made up of members of his FLN party, the military and business tycoons – react if protests keep growing.

His opponents say he is no longer fit to lead, citing his ill health and what they call chronic corruption and a lack of economic reforms. The president, rarely seen in public since a stroke in 2013, appeared in a wheelchair in Algiers in April last year but is now reported to be in a Swiss hospital.

Shops were open in Algiers on Monday but students did not show up for classes at Bab Ezzouar University in Algiers, the biggest in the oil-producing North African country.

Several other university campuses in Algiers were deserted.

“We are not going to study. This is a decision we have taken yesterday,” Amina, a 21-year-old student, told Reuters.

“Together we are the world and the system is nothing,” a said a message posted by activists on social media.

Bouteflika’s campaign manager said on Sunday that the president would run in the April 18 election, defying calls for him to quit at the end of his current term.

The announcement, read out by Abdelghani Zaalane on Bouteflika’s behalf, said the president pledged that if he won he would organize a national conference to discuss reforms and then call early elections in which he would not run. Ennahar TV said the fresh vote would be held within a year.Hundreds of students marched in Blida, about 40 km (25 miles) south of Algiers, shouting, “No new term, no new term!”

Security forces have sought to contain protests but there was no sign of the military.

Algiers residents who spoke to Reuters said they were disappointed by Bouteflika’s decision.

“How come Bouteflika asks for one more year? There is nothing in the constitution that allows this,” said Maziane Ali, a 50-year-old owner of a fast food restaurant.

Tens of thousands of protesters rallied on Sunday in cities around Algeria in the largest protests since the 2011 Arab Spring, calling on Bouteflika not to submit election papers. Zaalane filed the papers late that evening.

Despite the challenge to Bouteflika posed by the generally peaceful protests, analysts say the demonstrators lack a leader and the opposition is fragmented and disorganized.

Algerians generally tolerated a political system that left little room for dissent as a price to pay for stability after a nearly decade-long civil war in the 1990s that killed an estimated 200,000 people.

But discontent has simmered as falling global prices for oil and gas hit the economy in recent years: living standards are poor and more than a quarter of people under 30 are unemployed.